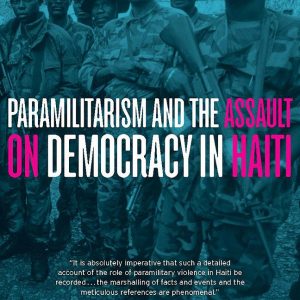 "It is absolutely imperative for Haiti's history that such a detailed account of the role of paramilitary violence in the country be recorded. The marshalling of facts and events and the meticulous references are phenomenal."

Paramilitarism and the assault on democracy in Haiti

In the aftermath of the 2010 earthquake that devastated Haiti, certain media outlets painted a picture of a country overrun by looters and at the mercy of gang members and other criminals, including thousands of prisoners jolted free by the quake.

Relevant details were ignored, such as the contention by prominent Haitian human rights attorney Mario Joseph that 80 per cent of said prisoners had never been charged. The media effort perhaps aided in rendering less incongruous in the eyes of the international public the deployment of a sizeable US military force to deal with quake-affected people who did not seemingly require military attention.

A Reuters dispatch from one week after the disaster – which reported “marauding looters”, “scavengers and looters swarm[ing] over damaged stores”, “increasingly lawless streets” and “[h]eavily armed gang members” – offered the following plea from policeman Dorsainvil Robenson:

“Haiti needs help … the Americans are welcome here. But where are they? We need them here on the street with us.”

The whereabouts of the ever-elusive Americans are of course hinted at two paragraphs later, when we learn that “the White House said more than 11,000 US military personnel are on the ground, on ships offshore or en route”. Elsewhere, French Co-operation Minister Alain Joyandet was quoted as commenting in reference to seemingly skewed US priorities: “This is about helping Haiti, not about occupying Haiti”. As foreign military monopolised the Port-au-Prince airport, teams of paramedics and first responders were delayed in the critical hours immediately following the earthquake.

Subscribers to the fantasy that the US is somehow qualified to counteract violence and install order in the Caribbean nation would do well to peruse a new book entitled Paramilitarism and the Assault on Democracy in Haiti, in which author Jeb Sprague masterfully documents – among other topics – the detrimental role of US and fellow international actors in Haitian history.

Offering new evidence obtained through interviews and a massive amount of formerly classified US government documents, the book clarifies how Haiti’s post-quake reconstruction rests on a foundation of total impunity achieved by the country’s most brutal paramilitaries and their financiers.

As Sprague notes, the US occupation of Haiti from 1915-1934 under “the pretext of possible German encroachment during the First World War… caused the deaths of an estimated 15,000 Haitians and saw the imposition of slave labour”. It also imposed “a modern army, one that would continue the US occupation long after US troops were gone”, functioning on behalf of the Haitian elite and their American counterparts. Observes Sprague: “The US occupation wedded the country’s future to North American business interests.”

Later, during the reign of Francois “Papa Doc” Duvalier in the 1960s, US Marines trained the dictator’s Tonton Macoutes paramilitary force, known for “leaving bodies of their victims hanging in public, a clear warning to anyone stepping out of line, most especially leftists, socialists and pro-democracy activists”. Linked to the business elite and the military itself, the Macoutes were “vital for upholding a system based on severe inequality and class privilege”.

Following the transfer of power to Jean-Claude “Baby Doc” Duvalier, a brutal counter-insurgency force known as the Leopards was trained and equipped “by former US marine instructors who were working through a company (Aerotrade, Inc and Aerotrade International, Inc) under contract with the CIA and signed off by the US Department of State”. …