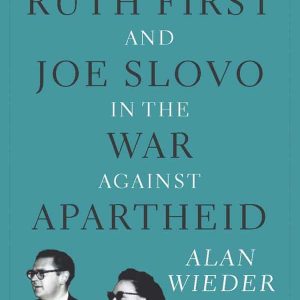 "A truly remarkable work. Alan Wieder shows himself as a writer equal to their life story, their inspiring bravery in action and self-analysis."

—Nadine Gordimer, winner of the Nobel Prize in Literature

Book Review: Ruth First and Joe Slovo in the War Against Apartheid

This biography of Ruth First and Joe Slovo – the husband and wife team who were leaders of the war to end apartheid in South Africa – intertwines documentary record with personal interviews to portray the complexities of this extraordinary couple and their efforts to navigate a time of great tension. Emma Lundin finds that Alan Weider’s work deserves to be well-read for its insight into the couple’s impact on political developments in South Africa and beyond during the 20th century and their relevance for understanding contemporary events in Southern Africa.

It was a stormy relationship that only a bomb planted by an apartheid agent could blow up. Ruth First was a great researcher and thorn-in-the-side of the apartheid government before her assassination by letter bomb in 1982; Joe Slovo was the lawyer turned guerilla mastermind, who blew up power stations and military headquarters before becoming a minister in Mandela’s first government, and laid to rest in Soweto’s Avalon Cemetery. Together, they were two of the most famous and important of South Africa’s anti-apartheid activists, and lived the sort of lives that made for great stories and even greater myths. Now, as the 20th anniversary of the first democratic elections in South Africa draws nearer, their lives’ worth and sacrifices are at risk of being relegated to the dusty shelf of history.

That is exactly what Alan Wieder – a professor emeritus at the University of South Carolina, with previous appointments at the University of the Western Cape and Stellenbosch University in South Africa – has set out to prevent by publishing this, his most recent book on South Africa’s apartheid history. He is on a quest to stem the tide of forgetfulness that means that “few young South Africans know of the contributions or the sensibilities that Ruth and Joe represented regarding the social justice and the revolution against class disparity and racism in the world” (p. 353).

Wieder knows his subjects well and cares deeply about them. Their stories have been written before: Ruth First’s prison memoir – the short 117 Days – and Joe’s posthumous Slovo: The Unfinished Autobiography form part of Wieder’s sources, but he also makes use of his skills and contacts as an oral historian to gain better insight into the First-Slovo dynamics, and their relationships with each other and others. As a result, his book comes stamped with the approval of many of their contemporaries, and contains interviews with several anti-apartheid activists who all help to bring a clearer picture of the protagonists to the fore…