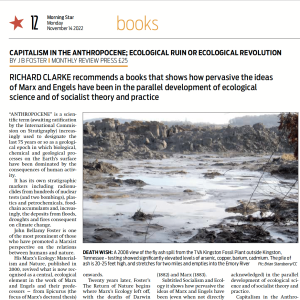 On Thursday 30th November John Bellamy Foster will deliver online the fifth annual Engels Memorial Lecture. Entitled “Engels and the Second Foundation of Marxism”, this will focus on Engels’ contribution to a Marxist understanding of human impacts on our planetary ecosystem today. For details and registration, head here.

‘Anthropocene’ is a scientific term (awaiting ratification by the International Commission on Stratigraphy) increasingly used to designate the last 75 years or so as a geological epoch in which biological, chemical and geological processes on the Earth’s surface have been dominated by the consequences of human activity. It has its own stratigraphic markers including radionuclides from hundreds of nuclear tests (and two bombings), plastics and petrochemicals, food-chain accumulants and, increasingly, the deposits from floods, droughts and fires consequent on climate change.

John Bellamy Foster is one of the most prominent of those who have promoted a Marxist perspective on the relations between humans and nature. His Marx’s Ecology: Materialism and Nature, published in 2000, revived what is now recognised as a central, ecological element in the work of Marx and Engels and their predecessors – from Epicurus (the focus of Marx’s doctoral thesis) onwards. Twenty years later, Foster’s The Return of Nature begins where Marx’s Ecology left off, with the deaths of Darwin (1882) and Marx (1883). Subtitled Socialism and Ecology it shows how pervasive the ideas of Marx and Engels have been (even when not directly acknowledged) in the parallel development of ecological science and of socialist theory and practice.

Capitalism in the Anthropocene, just published, supplements these two key reference texts. It consists of 22 chapters, mostly adapted and updated from earlier articles, organised in three sections. The first ‘The Planetary Rift’ examines the current environmental crisis through the lens of Marxist ecology. Part two, ‘Ecology as Critique’ addresses historical and theoretical issues from the concept of ‘nature’ and ‘natural’ from Marx’s own concept of the ‘metabolic rift’ and Engels’ Dialectics of Nature through the Russian geochemist Vladimir Vernadsky’s development of the biosphere concept and late Soviet ecology, to more recent advances in a dialectical human ecology. The final section ‘The Future of History’ challenges the notion that capitalism represents ‘the end of history’ (except to the degree that it threatens the end of humanity itself) and looks at current and future ecological and social struggles for a fairer and more sustainable world. Throughout, issues of the ownership and control of the means of production are central. This is a text to be dipped into over time, and, like Marx’s Ecology and The Return of Nature there are insights and food for thought (and action) in every chapter.

Geological epochs are divided into ages. So far the Anthropocene has been dominated by a globalised system of capitalist accumulation. Foster proposes the designation Capitalinian for this first geological age of the Anthropocene in the hope that it may be superseded by another; one “stabilizing the human relation to the earth” the Communian, rather than “an end-Anthropocene extinction event resulting in the destruction of civilization and quite possibly humanity itself.”

As the subtitle of the book – Ecological Ruin or Ecological Revolution – makes clear, the struggle for socialism is vital, for the well-being of our planet as well as of its peoples. There is no going back. 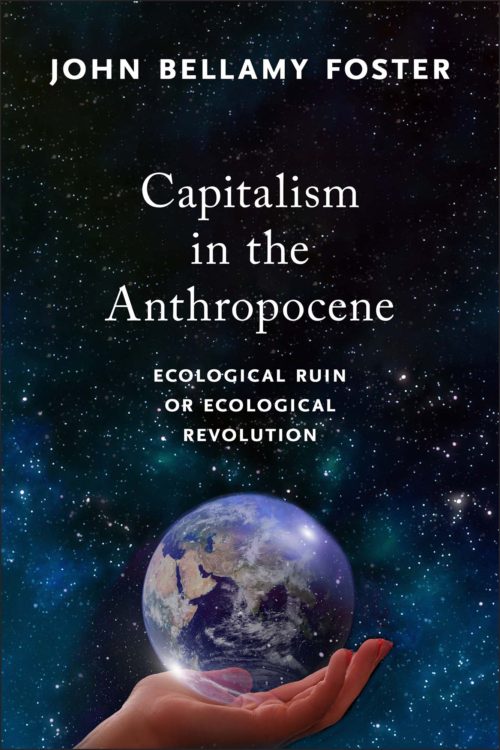