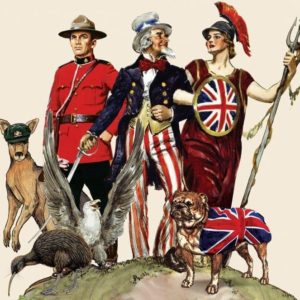 The fictitious bond of whiteness.

The Dawning of the Apocalypse:
The Roots of Slavery, White Supremacy,
Settler Colonialism, and Capitalism in the Long Sixteenth Century
304 pp, $27 pbk, ISBN 978-1-58367-872-5
By Gerald Horne

‘….The Dawning of the Apocalypse shows how “the minor archipelago on the fringes of the continent (the British Isles) was poised to come from behind, surge ahead and manoeuvre adeptly in the potent slipstream created by Spain, Portugal, the Ottomans, even the Dutch and the French”.

And it tells the story of how, under the British, the seeds of the current ideologies in the Republican Party of today were sown hundreds of years ago. Benefitting from the technological advances in the fields of navigation and guns developed by other countries, they drove the process of seizing outposts in foreign lands, establishing settlements, eradicating the indigenous people, confronting rival European powers and clearing land to grow sugar and coffee with African slave labour.

Slavery was not new to the period. There were European slaves in Morocco and within the Ottoman Empire and African slaves in Spain. This was one of the consequences of the wars between the empires of the period fought in the name of religion but which were in reality struggles for power and dominance.

Spanish conquistadors had opened up Mexico and large parts of South America around the Andes in the early part of the 16th century for colonisation as well as for plunder. And it was the Spanish who first set up colonies in Cuba and Florida to start with.

But Spain had a strict policy of allowing only Catholics to make the voyage across the Atlantic Ocean, and of refusing to co-operate with Protestants or Jews of other nations already inside the colonies. This was cruelly enforced by the Inquisition. When soldiers or new settlers were needed in the early Spanish colonies, the settlements often ended up short and became vulnerable to the frequent attacks by the indigent peoples or by uprisings of slaves.

The British had no such sectarian scruples. Walter Raleigh, Francis Drake, Jack Hawkins and others, with their highly profitable raids on Spanish ships carrying treasure back to Europe, had enlisted royal patronage for their exploits and had also fired the imagination of many for wealth and for escape from a rigid system and religious persecution. The defeat of the Spanish Armada in 1588 and the weakening of the dominant power in Europe, opened the way for London’s own invasion of North America.

Spain was over-stretched. By the 1560s Africans out-numbered the Spaniards in the settlements. Being first on the scene, Spain had laid claim to most of the two American continents “but its appetite exceeded its digestive ability in that Spain’s population was too small and much of it could not be allocated overseas given European challenges”. And religious sectarianism was hampering the ability of Madrid to pursue what turned out to be the winning course executed by London.

In the early 1600s, new settlers, were uniting across class and even religious lines, and what united them was their “whiteness”. The settlements had become a kind of joint European enterprise. Religious differences, that had so hampered the Spanish invasions, fell away as the white invaders came together “to bludgeon indigenes and batter Africans”.

This transition, writes Horne, “is best understood as a response to the brutal logic of settler colonialism in an alien land with inhabitants not necessarily polite to invaders”. It was an essential part of the transition from religion as an animation of society to race….’

On committed anti-Zionist elders, such as Rosalind Petchesky, coeditor of “A Land With a People” (Middle East Eye)
The teeth in the Labor Law trap (Marx & Philosophy Review of Books reviews “Tells the Bosses We’re Coming”)