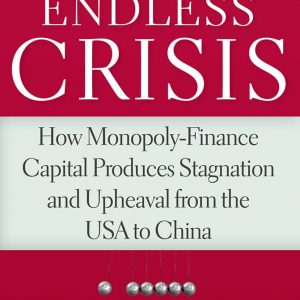 "This valuable inquiry should be carefully studied and pondered, and should be taken as an incentive to action."

From the Newsletter of the Marxist Sociology Section, American Sociology Association, Summer 2013

Book Review: The Endless Crisis: How Monopoly-Finance Capital Produces Stagnation and Upheaval from the USA to China, by John Bellamy Foster and Robert W. McChesney

While not covering the entirety of Marxism today, Monthly Review, since its inception, has been carrying on some of the best works of Marxism today. The foundations for this type of analysis was set out by the economists Paul Baran, Paul Sweezy, and Harry Magdoff. Truly insightful analytic and theoretical works like Monopoly Capital and Magdoff’s work on Imperialism (along with Harry Braverman’s work on Labor and Monopoly Capital) help bring Marx’s political-economic insights into the twentieth and twenty-first centuries. Karl Marx, having written in the nineteenth century, wrote about a particular phase of capitalism that was predicated less on oligopolies than today, although it was moving in that direction. In the best tradition of a historical-materialist approach—which seeks to understand the world as dynamic, rather than static—these authors realized that the organization of capitalism had changed. While the general driving force, the structural imperatives of increased expansion and accumulation, of capitalism remains, the way it goes about doing so is different. Competition, as we commonly think of it, has ended with the rise of monopoly capitalism—a system in which competition is between only a handful of large firms. This, as they point out, is not the result of greedy individuals, but, rather, part of a larger systemic feature of capitalism. What sets these authors apart is not just their keen insight but their ability and desire to engage with and incorporate non-Marxian political economy into their analysis (a feature of Marx’s work that has been overlooked).

John Bellamy Foster and Robert W. McChesney continue this strong tradition of analytically sharp Marxian political economy. In this, they argue that instead of growth being the fundamental feature of capitalist economies, crises of accumulation are. Systemic crisis, then, sets the table for explaining the rise of certain features of our economy. Thus, there is a contradiction within the capitalist system: capitalism is predicated on growth, yet, it is a system that tends towards stagnation. New phases of capitalism are attempts to bring the system out of crisis. Foster and McChesney argue, and very convincingly, that the rise of “Finance Capital” is due precisely to the crisis of accumulation that is endemic to capitalism.

Within their analysis of economic data Foster and McChesney highlight how over-accumulation (a fairly regular occurrence of capitalism) has ensued an era of underconsumption. This is exemplified by low profit rates and chronic excess capacity (waste). To overcome these structural issues capitalists have issued in a transformation towards financialisation. Doing so has greatly expanded and put increased pressure on non-financial corporations (NFCs) to generate an increase in consumption. Corporations are becoming more beholden to financial institutions altering their survival strategies. With an inability to absorb effectively economic surplus—stemming from a high level of effective demand, specifically with respect to the promotion of rising wages along with productivity—NFCs are coerced to paying a larger share of their internal funds to financial institutions. Furthermore, these financial institutions—which are increasingly concentrated in the hands of fewer and fewer people—become some of the most powerful actors. Increasing concentration of control within financial corporations lends credence to Marx’s (1894: 544-45) argument that the age of monopoly finance capital is one in which

The credit system, which as its focus in the so-called national banks and the big money lenders and usurers surrounding them, constitutes enormous centralization, and gives this class of parasites the fabulous power, not only to periodically despoil industrial capitalists, but also to interfere in actual production in a most dangerous manner—and this gang knows nothing about production and has nothing to do with it.

Concentrating control within the realm of financial actors redirects production farther away from meeting social needs and towards the realization of exchange-value. Additionally financial markets are, by their very nature, unstable creating a demand for more short-term survivalist strategies to maximize shareholder values. Therefore, financialisation is prone to, and may even accelerate, the general crises of capitalism (e.g. over-accumulation) through its destabilizing features. We see this, as they argue, with the bursting of the dot-com bubble and the housing market and what has become to be known as the “Great Recession.”

So, what does this book leave us with? The most important thing is that it provides us with a framework through which to analyze contemporary crises. Their argument is that reforming parts of the capitalist system will not end these crises. Therefore, shifting towards financialization is not a solution to the problem but rather an outgrowth of it. As such, thinking structurally and about systemic change is a more realistic solution to resolving the contradictions that stem from the capitalist mode of production.