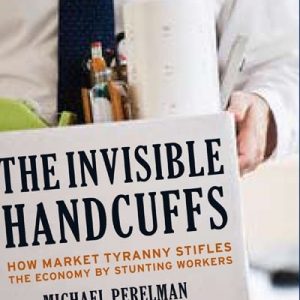 The Invisible Handcuffs of Capitalism

Stretched Too Thin
The Invisible Handcuffs of Capitalism
Michael Perelman

Michael Perelman, economics professor at CSU Chico, uses the Greek legend of Procrustes, who sadistically shortened or stretched unwary travelers to fit them on his iron bed, as a metaphor for a system that cruelly disciplines workers. In The Invisible Handcuffs of Capitalism: How Market Tyranny Stifles the Economy by Stunting Workers, Perelman shows how economic theory marginalizes workers and makes a robust case against the idea that competitive markets create freedom, as claimed by Adam Smith and his ideological heirs. We should be so lucky. Perelman shows that this myth prevents clear insights on how such unrestrained competition actually harms work, workers and working conditions. His main focus is the United States, with a chapter on global issues. Perelman also unzips the birth and life of the gross domestic product, part of the Procrustean bed that ill serves humanity. He concludes with possibilities for an economy that maximizes people’s abilities.

Interview with John Tully, author of The Devil's Milk: A Social History of Rubber
VIDEO: Fred Magdoff and William Camacaro on the Food Crisis