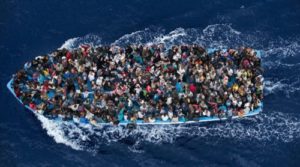 In a brief “Notes from the Editors” following his death last year, Samir Amin was described by his publisher Monthly Review Press as “the greatest single theorist of imperialism of the late twentieth and early twenty-first century.” In 2010 Amin reissued The Law of Worldwide Value, his most theoretical work on this life-project. On the basis of his never-ending theoretical development, the “essential core” of the original work was extensively revised and enriched from its presentation in the original publication 32 years earlier. The book under review here was published just prior to Amin’s death. The first half is an exact reprinting of the 2010 work, while the remaining half consists of a section of two short sets of essays, “Further Comments on Marx’s Capital and Historical Material,” and “Essays on Marx’s Value Theory.” A technical shortcoming to be mentioned in passing is that a detailed table of contents, such as the one in the 2010 edition indicating the chapters and subsections of the 140-page first work, which would be very useful for readers of this book, was somehow omitted.

In the “Introduction” to this work, Amin presents an extremely terse and rich statement concerning the origin, content and significance of his work (both this book and his life’s theoretical work in general), including among many other aspects of its relation to the work of Marx. Amin’s starting point was “a central question, that of ‘underdevelopment’ of contemporary Asian and African societies.” In addressing that, he carefully and thoroughly read Marx. While this “certainly brought considerable intellectual fulfillment and convinced [him] of the power of [Marx’s] thought,” he “found no answer in Marx” (11). “To be a ‘Marxist’ is to continue the work that Marx merely began, even though that beginning was of unequaled power. It is not to stop at Marx, but to start from him” (9).

Marx of course wrote voluminously about “world capitalism,” that is, about the actions of capitalism around the world during his lifetime. But the heart of his theoretical analysis of capitalism was the law of value, and “Marx [never] finished the opus that he set out to complete, and that included not integrating the ‘global dimension’ of capitalism into his analysis” (11). To be sure, concerning any issue Marx’s method (of presentation) was to start at a highly abstract level to indicate the essence of the issue, and then move “down” to more concrete levels to more closely reflect how that issue actually unfolded in the real world. But for his presentation of the law of value — despite his repeated indication of the need, and his intention, to do so — he never carried out the analysis on the more concrete level to indicate how the law of value was modified in a capitalism where the workers are divided into nations. Noting this, Amin says: “So I have tried to do so” (11).

This reviewer, and Amin himself, consider his attempt to do this to be his central and most important contribution to the never-ending project of building Marxism, of constantly deepening the analysis of a constantly changing capitalism. Likewise, it was these fruitful efforts throughout his life to make this extension of the analysis of capitalism that made him such an important theorist of imperialism. Put tersely, Amin summarizes this: “My major contribution concerns the passage from the law of value to the law of globalized value, based on the hierarchical structuring — itself globalized — of prices of labor-power around its value” (11, italics in original; cf. 83 ff.).

Amin takes capitalism around the world as “one and indivisible.” Under the system of capitalism, human labor produces value, and he explicitly rejects any idea that labor in one part of the world might create value at a different rate than in another. Continuing this logic of a single world system of capitalism, he argues that “labor-power has but a single value, that which is associated with the level of development of the productive forces taken globally.” At the same time, there are important asymmetries and hierarchies between different parts of the world system, and of particular concern to his life-project, between the “dominant (imperialist) centers and the dominated peripheries.” Then, key to his results: “Though there exists but one sole value of labor-power on the scale of globalized capitalism, that labor-power is nonetheless recompensed at very different rates.” This then forms the theoretical basis for his position on the “transfer of value from the peripheries to the centers” (all direct quotes in this paragraph from p. 84), or what he sometimes refers to as “super-exploitation” or “unequal exchange.” These latter two terms have become very widely used over the last half century, not only in academic but especially in political and popular discussions. They are almost always used, however, without any careful theoretical underpinning as to exactly what processes they refer to and how those work, beyond some vague idea that “the First World benefits from and harms the Third World.”

Samir Amin participated in many of the debates among Marxists about how to best understand capitalism that took place over the course of his lifetime. This book touches on many of those, including for example the issues of monopoly capitalism and finance capitalism. But this reviewer finds the most distinctive aspect of this book for any reader interested analyzing real world capitalism in a historical materialist framework — “Historical materialism constitutes the essence of Marxism” (10) — to be its discussion of his law of globalized value. In the first place, much is to be gained simply from the clear presentation in this work of the issue of an essential aspect of real-world capitalism that Marx never found time to incorporate into his theoretical work. But beyond that, a reader will also benefit from Amin’s carefully elaborated attempt to address that lacuna, whether or not in the end one fully agrees with Amin’s conclusions, disagrees with them all, or agrees with some and disagrees with others. 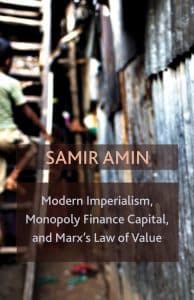