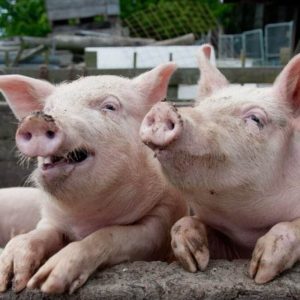 Did you happen to catch Rob Wallace on Last Week Tonight With John Oliver? It’s a primer on what we all wish was “a once in a lifetime nightmare” but which “is actually part of a global trend, because the total number of disease outbreaks has increased significantly since 1980;” And “this is not, by any stretch of the imagination, the worst that mother nature has to offer us.” If the below John Oliver program were merely the ultimate in sardonic entertainment, it might be purely depressing, but instead it’s almost a relief to watch. It’s essentially a 20 minute summary of many aspects of Rob Wallace’s work in both Dead Epidemiologists and Big Farms Make Big Flu, and as such it gives one hope that it is possible for knowledge to actually spread in tandem with all these viruses.

Not surprisingly, it’s when John Oliver gets really serious and starts talking about the root of the problem that (just after a series of images of kissable pigs) Rob Wallace comes in and explains “in the course of industrializing livestock and production, we are also industrializing the pathogens that circulate among them.” This is when it all comes together for John Oliver and his audience: “I know it’s hard to believe, but the cold mechanized factories that cram animals together before stamping their flesh into plastic meatballs and injecting them into supermarket freezer sections across the nation might be doing something bad. And when you put all of this together, it does start to seem, as if we’re actively trying to start pandemics. Which brings us to the question: How do we stop doing that? Well the most effective way would be to: Close down all wildlife markets; Ban Factory farming; Stop eating meat altogether; Halt deforestation; Shut down all state fairs….” Unfortunately, it’s not that simple, because unless we do all of the above without overcoming capitalism, all of the above will lead to massive job loss and even starvation in many cases.

Watch below or head to Last Week Tonight With John Oliver. Scroll over to 14:52 if you’re feeling impatient to see what Rob Wallace has to say.

Rob Wallace is an evolutionary epidemiologist with the Agroecology and Rural Economics Research Corps. He is author of Dead Epidemiologists and Big Farms Make Big Flu, both published by Monthly Review Press, and coauthor of Clear-Cutting Disease Control: Capital-Led Deforestation, Public Health Austerity, and Vector-Borne Infection. He has consulted with the Food and Agriculture Organization and the Centers for Disease Control and Prevention.

Hear the Venezuelan People (Listen: This is Hell)
Tigar on “Sensing Injustice” and almost every case imaginable (Listen: Law and Disorder)