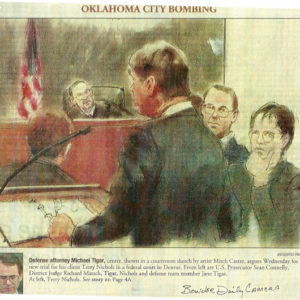 If you want to hear more of the details and stories around the trials of the Chicago 8, Julian Assange, Lynne Stewart, Pinochet, and dozens more dramatic court cases with direct impacts on each of our daily lives, then it will be well worth your while to give your ear to Law and Disorder‘s most recent conversation with Michael Tigar. Still, in his book Sensing Injustice, Tigar goes well beyond merely, if magnificently, narrating a profound array of legal battles. Tigar well understands the limits of law, and the lawyer, in the fight for justice — as do his fellow lawyers Heidi Boghosian and Michael Smith —and challenging existential questions about the nature of the legal profession also come up in the Law and Disorder interview.

During the interview, Tigar responds to Lucy Parsons, as she might have felt about the legal profession after her husband was sentenced to death in the courts: “Your lawyer’s victories, Clarence (Darrow) are like fireflies. You catch them and put them in a jar. By morning their light has gone out and your bugs are dead.” These haunting words were not spoken by Lucy, but written by Tigar, in a play he himself wrote. Sensing Injustice is in some sense in conversation with Tigar’s imagined Lucy Parsons, and other radicals who question the notion of fighting for justice in the courts. In a sense he later responds to her: “Is there some middle ground?…We lawyers did not really invent, and we surely do not own, the law. We act ‘for’ and ‘with’ our clients, seeking to identify the contradictions within the legal system that allow us to gain our—and their—victories. These are the stories in the chapters that follow.” Eventually, he returns to Darrow’s inspired words: “the federal courts should be a sanctuary in the jungle.” And that is the role Tigar is clear that he, and other lawyers seeking true justice, can play.

For more, listen below or at Law and Disorder