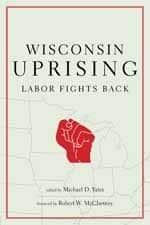 A Look Back in the Mirror at the Wisconsin Uprising

A Review Essay of It Started in Wisconsin: Dispatches from the Front Lines of the New Labor Protest, ed. by Mari Jo Buhle and Paul Buhle; Uprising: How Wisconsin Renewed the Politics of Protest, from Madison to Wall Street by John Nichols; and Wisconsin Uprising: Labor Fights Back, ed. by Michael D. Yates

The Wisconsin Uprising in February-March 2011 was one of the most exciting events in a long time in this country’s history. People mobilized on a scale not seen since the early 1970s, initially to protest a draconian assault on working people and public services intended to serve them, but it developed into a larger protest over the meaning of “democracy” in the contemporary United States. And though the protests ultimately failed to stop passage of an unjust law, it served and still serves as an inspiration to people in Wisconsin and around the world.

We now have three books specifically focused on this Uprising. I think they deserve consideration, and can be used to advance the larger conversation about Labor, protest movements and democracy. Since I have been active in the labor movement for over 30 years, made two visits to Madison (from Chicago) during the Upsurge, and have written some on the Upsurge—I have a chapter in the Buhles’ book, although was not involved in conceptualizing the collection and did not know even who was writing the other chapters, and published an account of the Iraq Veterans Against the War (IVAW) march in Madison on March 19 in “The Veteran,” the paper of the Vietnam Veterans Against the War (VVAW)—and am also an elected labor leader (I’m the Chair of the Chicago Chapter of the National Writers Union, UAW #1981), I thought I’d look at the reporting and analysis about the upsurge. (This review was begun before Scott Walker’s re-election as Governor but finished afterward: I’ve analyzed the books on their own terrain—before the election—unless specified otherwise.) …

… Wisconsin Uprising, which specifically includes contributions by Marxist-inspired and specifically Marxist-identified writers, looks at the Uprising from another perspective. The subtitle announces, “Labor Fights Back,” but the reality is that Labor—and I’m specifically talking about most labor organizations—did not fight back, not the first week and especially not after the first three weeks; it was labor activists and individual workers who fought back, along with many people with little or no connection to the labor movement. Ultimately, however, it was labor leaders—particularly at the national AFL-CIO level, according to Ben Manski in It Started—who undercut the struggle, channeling it from the solidarity and exhilaration of the Capitol Building and the streets into the stale, individualistic and uninspiring world of recall petitions and institutional politics.

In his introduction, Michael D. Yates notes some of the problems faced by working people across the country:

High unemployment, enormous and growing inequalities in wealth and income, and endless wars are pestilences that stalk the land, leaving their wakes a litany of woes: homicides, suicides, heart attacks, hypertension, arrests, prison admissions, mental illness, post-traumatic stress disorder, alcoholism, drug addiction, homelessness, family dysfunctions, and a host of others. Job growth is so slow that it will take nearly a decade just to get the unemployment rate down to 5 percent (20-21).

Yates argues that the future for working class people “is at best stagnant, and at worst continuously downward” (21).

The alternative, he avers, is to organize ourselves to change all of this. His most recent contribution to this project—following years of teaching, writing and publishing—is this collection he edited.

The book is divided into three thematic sections: “On the Ground in Madison,” “Moving Forward: The Lessons of Wisconsin,” and “Broadening and Deepening the Struggle.” I’m going to concentrate on the first section, because that’s where the meat of the collection lies in regard to Madison.

It was a monstrosity designed to destroy public sector unions, expand executive power over all government agencies, and slash health and social services by $50 million while restricting eligibility, raising fees, and excluding undocumented workers. He also aimed to privatize public utilities in no-bid sales. Thought the last item was removed before signing, the rest remained intact: the entire public sector will be ‘right to work’, the state will no longer deduct union dues from paychecks, contracts will expire if union representatives fail to receive support from a majority of members in annual elections, employees’ contributions to pensions will increase to half the actuarial costs, and collective bargaining will be limited to wages. Certain university and health care workers will have no right to organize whatsoever. The legislation promised to land a deadly blow to all of Wisconsin’s public sector unions, on top of an immediate drop in take-home pay totaling roughly $1 billion each year (31).

Yet, it was Andrew Sernatinger who pointed out that this Budget Repair Bill was a “scam,” a pretense to launch Walker’s (and ALEC’s) political attack: Wisconsin had a $121.2 million surplus when Walker entered office, but he and the Republicans paid “over $140 million to special interest groups in January through tax deductions, credits and reclassifications. They could then say that was actually a budget crisis (keeping quiet that they themselves had created it) and move forward with measures to ‘correct’ it” (49).

It was the phony budget crisis, and the draconian “fix” to it, rammed down people’s throats, that provoked Wisconsinites. The initiative of graduate students at the University of Wisconsin-Madison—themselves already organizing against another proposed attack, efforts to separate the flagship Madison campus from the rest of the UW system—along with students from the nearby Stoughton and then Madison and their teachers, that set off the upsurge.

Lee Sustar provides the most detailed description of the struggle. He discusses in detail the “long war” against Wisconsin labor, although he would have benefited from Roger Bybee’s chapter in It Started. Sustar also provides the most detail about how union leaders—especially above the local union level—were to eager to surrender members’ wages in order to keep the institution of collective bargaining intact, as well as the unions’ income streams. He points out that “the big union operations—AFSCME [American Federation of State, County and Municipal Employees], WEAC [Wisconsin Education Association Council] and the State AFL-CIO—literally pulled the plug on mass protests after February 26 and turned their backs on the occupation of the capitol” (80). And how these union “leaders” channeled the protest into recall elections, first against state senators and then later against Walker.

Sustar claims that “union members weren’t confident enough in their own capacity and organization to reject concessions” (82), and he asserts that networks of rank and file labor activists did not exist sufficient to change this. Forty years of “industrial restructuring, a relentless corporate offense against unions and a demographic transition had all but eliminated such rank-and-file union organization in corporate America” (82)….

Read the entire review on ZNet

Read an excerpt of The Contradictions of "Real Socialism" by Michael A. Lebowitz on LINKS
NEW! An Introduction to the Three Volumes of Karl Marx’s Capital by Michael Heinrich