Dear Reader, we make this and other articles available for free online to serve those unable to afford or access the print edition of Monthly Review. If you read the magazine online and can afford a print subscription, we hope you will consider purchasing one. Please visit the MR store for subscription options. Thank you very much. —Eds.
Notes from the Editors
by The Editors
(Dec 01, 2012)
Topics: Ecology History Movements 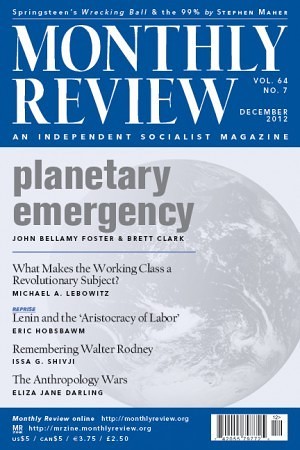 As we write these notes at the beginning of November climate change is once again in the headlines in the United States and around the world. This is because of the devastating impact of Hurricane Sandy, not only on islands in the Caribbean, but also on the northeastern United States and particularly New York and New Jersey, with the impact of the storm dramatized by the damage to New York City. Coincidentally almost twenty-five years ago it was a heat wave experienced in New York, coinciding with climatologist James Hansen’s famous testimony to Congress, that first made global warming a public issue, and increasingly an international one with the formation that year of the United Nations Intergovernmental Panel on Climate Change. Whether Hurricane Sandy’s destruction in New York and New Jersey will lead to a similar elevation of climate change as a public issue this time around remains to be seen.

That climate change was a factor, mixing with natural variability, in the devastation wrought by Hurricane Sandy is not in doubt. According to Mark Fischetti, in “Did Climate Change Cause Hurricane Sandy?” (Scientific American blog, October 30, 2012), one crucial connection between Hurricane Sandy and climate change is associated with the cold jet stream moving south and adding energy to the atmosphere and Sandy, further expanding the storm. The atmospheric pattern (known as a “blocking high”) that sent the jet stream south can be traced to record Arctic sea ice melts in the summer and the effect this had on the North Atlantic Oscillation. In other words, climate change is believed to have had a large and fairly direct effect in increasing the severity of Sandy when it hit the Northeast and in causing its track to take a very unusual turn to the west directly into New Jersey. (Those interested in the scientific details might want to see Dr. Jeff Masters’ WunderBlog.)

But there are numerous other aspects of climate change involved as well, since global warming alters the baseline for storms, amping up the underlying factors by warming the oceans and creating more energy for storms, while also warming the atmosphere so that it holds more moisture, which is drawn into storms.

Scientists are more and more concerned about extreme weather resulting from climate change. The imprint of climate change is increasingly evident in heat waves, droughts, storms, and floods. James Hansen wrote an op-ed piece for the Washington Post on August 3, 2012 (entitled “Climate Change is Here—And Worse than We Thought”) in which he stated emphatically that the deadly European heat wave of 2003, the Russian heat wave of 2010, and the devastating droughts in Texas and Oklahoma in 2011 could all be attributed to climate change. Hansen stated that “the odds that natural variability created these extremes” were “minuscule.”

The advent of extreme weather, then, may be our last chance to wake up and realize that accelerated social change must necessarily occur if the future of humanity is to be secured, involving the rapid phasing out of fossil fuels, and a transcendence of the current socioeconomic regime (the subject of this month’s ROM, “The Planetary Emergency,” by John Bellamy Foster and Brett Clark).

In the future we are likely to look back at the decades that were wasted as capitalism with its accumulation dynamic and its heavy reliance on fossil fuels blocked all serious attempts to deal with the overall environmental problem, and suppressed or systematically filtered out the warnings of science. A case in point is the early warning of the late Barry Commoner, one of the most important environmental scientists and activists of the twentieth century. More than four and a half decades ago, in his Science and Survival (1966), Commoner wrote:

A report by the President’s Science Advisory Committee finds that extra heat due to fuel-dependent carbon dioxide accumulated in the air by the year 2000 might be sufficient [over time] to melt the Antarctic ice cap…. This would result in catastrophe for much of the world’s inhabited land and many of its major cities…. And suppose that, as it may, the accumulation of carbon dioxide begins to threaten the entire globe with catastrophic floods. Control of this danger would require the modification, throughout the world, of domestic furnaces and industrial combustion plants…. Combustion-driven power plants could perhaps be replaced with nuclear ones, but this would pose the problem of safely disposing of massive amounts of radioactive wastes and create the hazard of reactor accidents near centers of population. Solar power, and other techniques for the production of electrical power which do not require either combustion or nuclear reactors, may be the best solution. But here too massive technological changes will be needed in all industrial nations (11, 125–26).

Commoner did not, however, see technology in some simplistic way as a solution to global warming. Rather technology was in many cases the cause of environmental crises and this could be traced to the social relations of production: “Technology has not only built the magnificent base of modern society,” he wrote, “but also confronts us with threats to survival which cannot be corrected unless we solve very grave economic, social, and political problems…. Every major advance in the technological competence of man has enforced revolutionary changes in the economic and political structure.” In short, the problem was the organization of capitalist society itself. In the present age, Commoner declared, “a new conservation movement is needed to preserve life itself” (126–27, 132).

It is clear to us that Commoner’s commitment to socialism, and thus to the confrontation of reason with reality, allowed him to see more than four and a half decades ago what so many failed to see. His call for a “new conservation” or environmental movement dedicated to preserving “life itself” is now more important than ever. Such a movement would have to be socialist in the sense of promoting a society of sustainable human development and substantive equality.

If we fail to stop climate change and the other planetary rifts by transforming society rapidly, then we will need, for sheer survival, to adapt to the new, harsher global environment. In either case the answer is a collective one: the creation of a world of ecological sustainability and social equality beyond capitalism. There is no other way.

We record with sadness the death last May of Elizabeth Ewen, author of the Monthly Review Press book Immigrant Women in the Land of Dollars: Life and Culture on the Lower East Side, 1890–1925 (1985). Her book inspired a 1993 documentary film, Heaven Will Protect the Working Girl. Ewen also wrote a number of other notable books, often coauthored with her husband, Stewart Ewen, including: Channels of Desire: Mass Images and the Shaping of American Consciousness (1982) and Typecasting: On the Arts and Sciences of Human Inequality (2006). At the time of her death she was a Distinguished Teaching Professor in the Department of American Studies, State University of New York at Old Westbury.

Correction: On page 13 of Bob McChesney’s “This Isn’t What Democracy Looks Like” in MR November 2012, Chart 2 should have been titled “Index of Growth in Real GDP Per Capita and Real Median Family Income, 1960–2010.”

The Planetary Emergency
The Psychology of Culture