Dear Reader, we make this and other articles available for free online to serve those unable to afford or access the print edition of Monthly Review. If you read the magazine online and can afford a print subscription, we hope you will consider purchasing one. Please visit the MR store for subscription options. Thank you very much. —Eds.
by Zhun Xu, Wei Zhang and Minqi Li
(May 01, 2014)
Topics: Ecology Places: Asia China
Zhun Xu is an assistant professor of economics at Renmin University of China. Wei Zhang is an assistant professor in the School of Labor and Human Resources at Renmin University of China. Minqi Li is an associate professor of economics at University of Utah. Please address all correspondence to Wei Zhang (wzhang12 [at] ruc.edu.cn).

Some progressive writers have argued that while China’s agricultural privatization achieved short-term gains, it did so by undermining long-term production facilities such as the infrastructure and public services built in the socialist era.1 Environmental scholars have questioned the sustainability of the Chinese agriculture. In a report published in 1995, Lester R. Brown raised the question: “Who will feed China?” He argued that the Chinese population’s changing diet, shrinking cropland, stagnating productivity, and environmental constraints would lead to a widening gap between China’s food supply and demand, a gap the world’s leading grain exporters would not be able to fill.2

This article argues that China’s actual grain production levels may be substantially lower than the officially reported levels; in fact, grain production has stagnated since the late 1990s. China’s growing dependence on imports to meet its demand for grains will impose increasingly untenable pressure on the world grain market. In the long run, China’s grain supply may be further undermined by constraints of land and water resources as well as environmental degradation.

In recent years, some Chinese agricultural experts have questioned the reliability of China’s official grain production statistics, and the second section discusses their opinions. The third section estimates China’s total uses of domestically produced grains; it is argued that the estimated total uses can be a good proxy of China’s grain production levels. China’s official statistics may have overestimated China’s actual grain production level in 2012 by about 100 million tons. The fourth section considers the long-term challenges to China’s food supply, and the last section comments on China’s privatized agricultural system.

According to the Chinese official statistics, China’s grain production reached a record level of 602 million tons in 2013, marking the tenth year of consecutive growth starting from 2004.4

Jiang pointed out that China’s annual consumption of grains as food and feed was about 420 million tons. The official grain production level of 570 million tons in 2011 would imply a massive surplus of 150 million tons. However, there was no evidence of massive increase in grain storage. On the contrary, China’s imports of cereals, soybean, and edible oil amounted to nearly 140 million tons of grain-equivalent in 2011.

In the early 2000s, the Chinese government changed the agricultural subsidy policy. In 2004, the Chinese government started to implement nationwide the “direct grain subsidy” (liangshi zhibu) policy. The policy intended to provide a cash subsidy directly to rural households, often in proportion to the reported sown areas. Li Changjin suspected that the “direct grain subsidy” policy might have given the rural local governments incentives to over-report the sown areas.

Under China’s current agricultural statistical system, the national grain production statistics are inferred from a very small sample. The grain yields from the sample fields are used to project the nationwide yields using estimated sown areas.7 If the sown areas are over-reported and the grain yields in the sample fields do not represent most of the country well, the official statistics would involve large upside biases.

Li Changjin believed that the county where he conducted field research was representative of the rice-growing areas in the Southern provinces. His rough calculation suggested that China’s national grain production was likely to be around 500 million tons.8

Total grain production expressed in terms of use or consumption is thus as follows:

Some statistical discrepancies are inevitable between the reported grain production levels and the estimated total uses. However, the statistical discrepancies should be reasonably small and distributed randomly across different years. One should not expect systematic divergence between the two series in either the positive or the negative direction. The following paragraphs explain how we estimate China’s grain uses.

Food and Feed Consumption. China’s National Bureau of Statistics conducts household surveys in both the urban and the rural areas. The survey data include per capita consumption of rice, edible oil, meat, and other food intakes. Other studies have established the transformation coefficients that transform meat, eggs, aqua-products, and dairy products into grain-equivalents in China. For example, according to Liang Shumin and Sun Qingzhen’s study, 1 kilogram of pork is equivalent to 4.6 kilograms of grains (see the sources of Table 1). Combining these data, we estimate China’s total consumption of grains as food and feed. Table 1 shows how we estimate China’s grain consumption as food and feed in 2012.

Industrial Consumption. BP Statistical Review of World Energy 2013 provides data of China’s ethanol production from 2001 to 2012. In 2012, China produced 1.7 million tons of ethanol.9 We assume that China’s grain input-ethanol output ratios were the same as those in the United States. Based on this assumption, China’s grain consumption for biofuels production in 2012 is estimated to be 7.2 million tons. 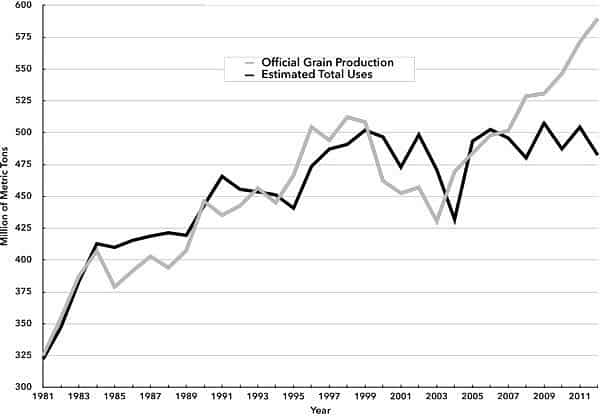 Sources: See the sources of Table 1 and the text of the section on “China’s Grain Production: Evidence from Grain Uses.”

However, since 2008, a significant and systematic gap has emerged between the two series. From 2008 to 2012, the official production level was consistently higher than the estimated total uses and the gap widened from 10.1 percent in 2008 to 22.2 percent in 2012. These systematic and widening gaps cannot be explained by normal statistical discrepancies. Either there are large underestimating biases in the various sources we use to estimate China’s grain uses, or the official statistics have greatly overestimated China’s actual grain production levels.

On the other hand, it would be interesting to note that the Chinese government started to implement the “direct grain subsidy” policy in 2004. It is possible that three or four years after the implementation of the policy, many rural local governments began to realize that they could receive more subsidies by over-reporting sown areas or by not reporting lost sown areas (which might result from labor force migration, urbanization, or environmental degradation), they could maintain previous levels of subsidies.

Who Will Feed China?

The rapid growth of modern agriculture has been based on mechanization, chemical inputs (fertilizers, pesticides, and herbicides), irrigation, and high-yield seeds responsive to fertilizers and irrigation. Modern agriculture depends heavily on the nonrenewable fossil fuels for the production of chemical inputs, operation of farm machines, packaging, and transportation.

From an ecological perspective, modern agriculture is fundamentally unsustainable. Mechanized tillage, use of chemical fertilizers, and large-scale monoculture lead to soil erosion. Pests develop generic resistance to pesticides. Perennial irrigation leads to waterlogging, salinization, and aquifer depletion. In the long run, all elements of modern agriculture suffer from diminishing returns.14 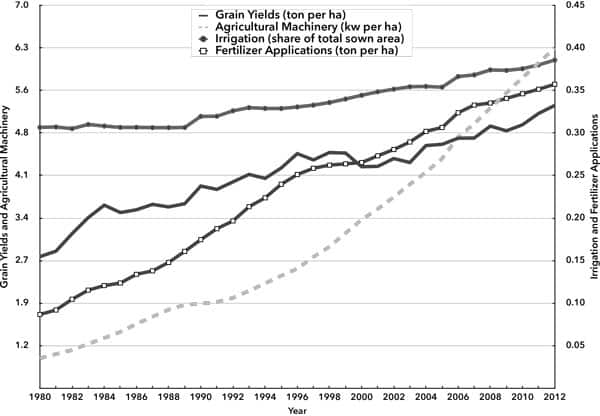 According to research conducted by the Chinese Academy of Sciences, about one-sixth of China’s arable land (or 20 million hectares) has been polluted by heavy metals. About 40 percent of China’s land is affected by soil erosion, salinization, and desertification.16 According to a paper published at the 19th World Congress of Soil Science, under the existing trend of soil erosion, China’s grain yields may decline by 11 percent from 2005 to 2030 and by 15 percent from 2005 to 2050. As a result, China may face a food deficit of 14 percent of the expected food demand by 2030 and a food deficit of 18 percent by 2050.17

In 2012, China’s total water use by the agricultural sector was 388 cubic kilometers, accounting for 63 percent of China’s total water use. Out of the 388 cubic kilometers, 113 cubic kilometers was withdrawn from the nonrenewable ground water.19 As the ground water becomes depleted, about 30 percent of China’s currently irrigated agriculture will be threatened. Given the land, water, and environmental constraints, China will have growing difficulty to raise domestic grain production. Indeed, according to our estimates, China’s grain production has stagnated over the past one and a half decades.

According to Carleton Schade and David Pimentel, due to the loss of arable and irrigated land, the world will struggle to meet the food demand by the mid-twenty-first century. The world will fail to provide enough food for between 1 and 4 billion people by 2050.21 If the world grain and soybean exports fail to increase significantly between now and 2030, China’s rising imports will impose unbearable pressure on the world grain market. Many small and poor countries will be priced out of the world grain market. China may find itself unable to afford the surging food prices.

Even today, the capitalist mode of production has made only limited intrusions into the Chinese agricultural sector. According to a recent survey by China’s Ministry of Agriculture, as of 2012, there were 877,000 capitalist or quasi-capitalist “family farms” in China. The total arable land on which they operate was 12 million hectares, or 10 percent of the national total. Their average land-holding was 13 hectares, much larger than the average land-holding of a peasant family under the “Household Responsibility System,” which was only 0.5 hectare. The largest 16,500 “family farms” each had a land-holding greater than 70 hectares.23

Because of the legacy of the Chinese Revolution, China’s petty peasant agriculture has developed under relatively “free” conditions, without oppression of feudalism or other pre-capitalist social relations, which continue to affect economic and social development in many Asian, African, and Latin American countries.

Despite such “ideal” conditions, the modern Chinese agriculture has produced essentially the same social and environmental consequences as the more typical capitalist agricultural systems. Since the 1980s, China’s rural areas have served as the main supplier of cheap labor force to the urban capitalist economy, undermining the bargaining power of the urban working class. China’s inequality in income and wealth distribution has risen to levels comparable to other capitalist “middle-income” countries.

Like capitalist agriculture, Chinese agriculture of today relies heavily on fossil fuels, synthetic chemical inputs, and, frequently, irrigation water polluted with industrial chemicals, resulting in land degradation and more water pollution. In many parts of rural China, pollution of soil, water, and crops has reached catastrophic levels. It is reported that there are about 250 “cancer villages” in China, where a disproportionally large fraction of the local population has died of cancer.24

The Chinese experience over the past three decades has demonstrated that the individual peasant households, even though they are “petty,” do not have a natural tendency to pursue socially and environmentally sustainable objectives. Surrounded by the capitalist economic system, Chinese peasants are constantly induced as well as pressured by the logic of the capitalist market to pursue short-term private gains at the expense of the community and the environment.

The only “success” the privatized Chinese agriculture can claim is that it has achieved substantial increases in food production (partly by utilizing the infrastructure built in the socialist era) and provided massive amounts of relatively cheap food (though occasionally poisonous) to the labor force employed by the urban capitalist sector.

However, if this article’s analysis proves to be valid, it would suggest that the only “success” of the privatized Chinese agriculture is beginning to fall apart.

The challenge for China and the world is to develop a new agricultural system that can manage the material exchanges between human society and nature in a sustainable way, can provide adequate and nutritional food to the entire population, and can distribute and deliver the food in accordance with social equity. It is difficult for us to imagine that these objectives can be accomplished by a social and economic system other than socialism.

View all posts by Zhun Xu →

Australian Coal: Should It Be Left in the Ground?
Stagnation and Financialization