Dear Reader, we make this and other articles available for free online to serve those unable to afford or access the print edition of Monthly Review. If you read the magazine online and can afford a print subscription, we hope you will consider purchasing one. Please visit the MR store for subscription options. Thank you very much. —Eds.
Notes from the Editors
by The Editors
(May 01, 2014)
Topics: Marxism Movements Places: Americas Global 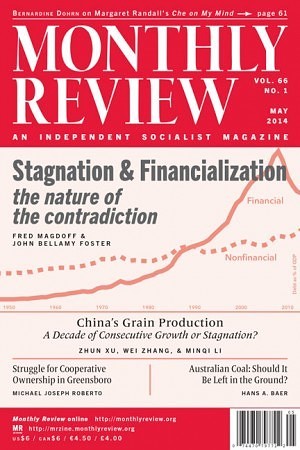 Monthly Review celebrates its sixty-fifth anniversary with this issue. Today the causes for which the magazine has stood throughout its history—the struggle against capitalism and imperialism and the battle for socialism as the only alternative path—are more pressing than ever. Indeed, so great is the epochal crisis of our time, encompassing both the economic and ecological crises, that nothing but a world revolution is likely to save humanity (and countless others among the earth’s species) from a worsening series of catastrophes.

This may seem like a shocking statement; ironically, not so much because of its invocation of the visible threat to humanity’s existence, but rather because of its reference to revolution as the only solution. Would it not be better, one might ask, to concede to the conventional wisdom and call instead for a global reform movement, as far less frightening in its implications than outright revolution? Here we cannot do better than quote from the great artist, writer, and socialist, William Morris:

The word Revolution, which we Socialists are so often forced to use, has a terrible sound in most people’s ears, even when we have explained to them that it does not necessarily mean a change accompanied by riot and all kinds of violence, and cannot mean a change made mechanically and in the teeth of opinion by a group of men who have somehow managed to seize on the executive power for the moment. Even when we explain that we use the word revolution in its etymological sense, and mean by it a change in the basis of society, people are scared at the idea of such a vast change, and beg that you will speak of reform and not revolution. As, however, we Socialists do not at all mean by our word revolution what these worthy people mean by their word reform, I can’t help thinking that it would be a mistake to use it, whatever projects we might conceal behind its harmless envelope. So we will stick to our word, which means a change of the basis of society; it may frighten people, but it will at least warn them that there is something to be frightened about, which will be no less dangerous for being ignored; and also it may encourage some people, and will mean to them at least not a fear, but a hope (“How We Live and How We Might Live,” Signs of Change [1888]).

To advocate for revolution in the above sense, not as a fear but as a hope, obviously does not mean a rejection altogether of the process of legal reform, but rather the abandonment of the usual limited, non-starting, counterproductive reforms, offered up by the system, which are meant to close off the future and to defend the existing order, making real change impossible: what in socialist theory is known as reformism. All actions initiated by popular forces today should rather be aimed at “a change in the basis of society.” Revolution, as Rosa Luxemburg observed, is distinguished from reform not so much in representing a different method of change, or in occurring over a different duration, but rather in its constituting a distinguishing moment of the struggle. (“Social Reform or Revolution,” in The Rosa Luxemburg Reader [Monthly Review Press, 2004], 155–60.)

Such a strategy of social transformation representing a distinct moment of struggle is imbedded in the Review of the Month by Fred Magdoff and John Bellamy Foster in this issue of MR, which closes with a discussion of feasible actions that could reasonably be advanced today—if we were to treat our most urgent social and human problems as our highest priorities, disconnected from the logic of capital accumulation. Similarly, in What Every Environmentalist Needs to Know About Capitalism (Monthly Review Press, 2011) written by the same authors, a two-stage strategy of ecological revolution was outlined—the first consisting of what realistically could be attempted now, if conformity to the rules of the system were not seen as the primary constraint on action; the second addressing the far greater transformations that would need to be carried out over the long-term to create a society of substantive equality and ecological sustainability, i.e., socialism.

Real revolutionary transformations will emerge most readily today, as has been the case for more than a century, out of struggles in the periphery of the capitalist system, where the material conditions that people must confront are more severe due to centuries of imperialist exploitation—compounded now by the fact that climate change is hitting the global South the hardest.

In contrast, within the United States, at the very center of the world empire, the obstacles to the emergence of a powerful movement for revolutionary change are in many ways more formidable. Here the working class has historically been divided off from itself and from most of the rest of the globe by the legacy of centuries of chattel slavery, and by a world-imperialist role growing out of an earlier history of colonial expansion, consummated by global hegemony and multinational-corporate domination after the Second World War. Nevertheless, here too the way forward is clear. What is needed is the rebuilding of the labor movement on an anti-capitalist, internationalist basis; the militant resurgence of all of the new social movements of the 1960s (particularly the radical struggles for race and gender equality and gay rights); and the transformation of the environmental movement into a powerful ecosocialist resistance. None of this is conceivable of course without a drive for democratic control over the cultural apparatus (communications and education). Moreover, due to its strategic presence within “fortress America” at the epicenter of the imperialist world system, the U.S. left is uniquely charged with making the struggle against imperialism and war the very substance of the movement.

Where MR itself is concerned, we are proud to affirm today, sixty-five years after the creation of the magazine, that we stand for the same revolutionary aspirations for which we have stood from the very beginning. As Albert Einstein stated in the very first issue of the magazine: “I am convinced there is only one way to eliminate these grave evils [of capitalism], namely through the establishment of a socialist economy, accompanied by an educational system which would be oriented toward social goals…. Clarity about the aims and problems of socialism is of greatest significance in our age of transition. Since, under present circumstances, free and unhindered discussion of these problems has come under a powerful taboo, I consider the foundation of this magazine to be an important public service” (“Why Socialism?,” Monthly Review 1, no. 1 [May 1949]: 14–15).

Adolph Reed’s important, if controversial, article, “Nothing Left,” in the March 2014 issue of Harper’s, lamented the decline of an earlier dynamic left in the United States centered on a militant labor movement and the New Deal coalition. We were therefore pleased that on the first page of his article he singled out Monthly Review as one of a very few holdouts amongst publications in the rightward shift of a U.S. left that has ceased to be “left”—that is, has largely severed itself from working-class struggles. Reed concludes his article by arguing that “labor may be weak or in decline, but that means aiding in its rebuilding is the most serious task for the American left.”

We agree. And we would like to add that on the front line of this struggle today are K–12 educational workers who are engaging in strikes and various forms of resistance across the country against the privatization of the public school system. Precisely because teachers, supported by parents and community members, are now fighting not just for their jobs, but also for children, society, and community, they constitute, in our view, the heart of a new social unionism both in the United States and in many other countries. We encourage MR readers to get involved in various ways in this struggle, which is now taking the form of a united opt out from testing movement. See http://unitedoptout.com.

Stagnation and Financialization
Rupert Murdoch: Not Silent, But Deadly