Dear Reader, we make this and other articles available for free online to serve those unable to afford or access the print edition of Monthly Review. If you read the magazine online and can afford a print subscription, we hope you will consider purchasing one. Please visit the MR store for subscription options. Thank you very much. —Eds.
Notes from the Editors
by The Editors
(Sep 01, 2014)
Topics: History Movements Places: Global 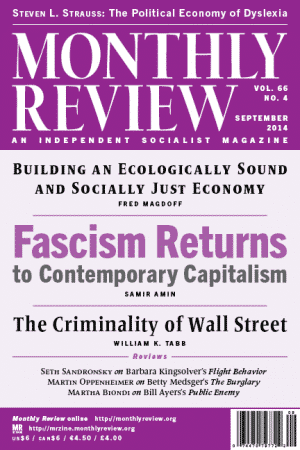 This year is the 150th anniversary of the International Working Men’s Association (IWMA), often referred to as the First International. Formed in 1864 under the leadership of Karl Marx, it operated—in contrast to what were subsequently called the Second, Third, and Fourth Internationals—under the principle of unity with diversity, rejecting a policy of absolute doctrinal unity. After considerable successes, however, it fell prey to sectarian struggles and finally expired in 1876. The 150th anniversary coincides with growing worldwide calls for the construction of a New International. In February 2014, MR published a paper, “Reflections on the New International,” that István Mészáros had drafted in 2010 at the request of Venezuelan President Hugo Chávez. In June 2014, we published Samir Amin’s “Popular Movements Toward Socialism,” addressing the same subject. Both Mészáros and Amin insisted that despite the eventual decline of the IWMA into the factionalism which led to its demise, it—and not the Second, Third, or Fourth Internationals—constituted the model for a New International.

One of the most important institutions of the socialist left in Britain is the Marx Memorial Library in London. Founded in 1933, at a critical moment for the left and the world, it has been a consistent voice for Marxism and internationalism. Its inaugural lecture, “The Life of Marx,” was delivered on November 5, 1933, by Tom Mann, the famous socialist labor leader, who had first risen to prominence in the 1889 London dock strike, and was a friend and comrade of Eleanor Marx and Frederick Engels. (Mann and Eleanor Marx are both central figures in John Tully’s Silvertown: The Lost Story of a Strike that Shook London and Helped Launch the Modern Labor Movement, recently published by Monthly Review Press.)

In spring 2014, the Marx Memorial Library launched its new annual journal Theory & Struggle, intended as an expanded version of its earlier bulletin, Praxis. This inaugural issue includes the annual Marx Memorial Lecture “What Can We Say About the Crisis of 2007?” delivered in February 2014 by Costas Lapavitsas, professor of economics at the School of Oriental and African Studies, University of London, and author of Profiting Without Producing (London: Verso, 2014). In a statement that will interest MR readers, Lapavitsas declared in his Marx Memorial Lecture that:

To me the crisis that broke out in 2007 is a crisis of financialisation…. As a concept, financialisation originates in Marxist political economy. The first reference to it that I can find is associated with Monthly Review and Paul Sweezy. For Sweezy, modern capitalism is characterized by the ceaseless growth of “surplus” which cannot be easily absorbed productively and tends to be used unproductively. A crisis emerges when the “surplus” is so great that the economy becomes inundated with it and tries to find other ways of dealing with its excess.

Sweezy thought that finance could be one of these ways in which the surplus could find some kind of profitable use. When the crisis of 1973–74 broke out and the long post-war boom finished, Sweezy was the first to argue that from now on we are likely to see a period of steady growth of finance because that is where the surplus will end up. So the Monthly Review tradition is where the first intimations and first analysis of financialisation can be found, and it continues to produce valuable work on this issue.

Those interested in Theory & Struggle and the Marx Memorial Library should go to http://marx-memorial-library.org.

The July–August 2014 number of the Progressive is billed as “The Robber Barons Issue” and has as its cover title “Attack the Plutocrats.” It includes a review by its senior editor, Matthew Rothschild, of Thomas Piketty’s best-selling Capital in the Twenty-First Century, unquestionably the most widely discussed economic work today. Rothschild starts out saying: “I admit it: I came to the Thomas Piketty book with some skepticism. I’ve read a lot of books and magazine articles over the last couple of decades about increasing inequality and about the stagnation of our current stage of capitalism. Hell, Monthly Review has been dedicated to the subject for the past forty years.” Rothschild moves on, however, to a serious consideration of Piketty’s work, and to what we think is a realistic if brief assessment of its notable strengths and weaknesses, primarily from a movement perspective. He then follows up this assessment by quoting interviews that he conducted with “two leftwing economists”: Dean Baker, co-founder of the Center for Economic and Policy Research, and John Bellamy Foster, editor of Monthly Review. Baker’s take on Piketty’s book is generally supportive, but he criticizes it for its preferred solution of taxation of wealth as “unrealistic politically.” Foster, in contrast, argues that its “advocacy of a tax on capital (wealth) is a kind of opening of the door to a vital issue,” while adding that “so detached is his [Piketty’s] analysis from concrete developments in political economy that he is unable to explain the power dimensions behind inequality itself.” For more on The Progressive see http://progressive.org.

We would like to congratulate our close friend and MR colleague Brett Clark, a member of the MR editorial committee and the author of three Monthly Review Press books—The Critique of Intelligent Design(2008) and The Ecological Rift (2010), both coauthored with John Bellamy Foster and Richard York; and The Science and Humanism of Stephen Jay Gould, coauthored with York—on his election as chair of the Section on Marxist Sociology of the American Sociological Association. Clark and York—who just stepped down in August from his position as chair of the Environment and Technology Section of the American Sociological Association—are leading lights in the development of a new tradition of critical human ecology (sometimes referred to as CHE).

This summer Monthly Review updated and fully indexed its archives, making every article, going back to the inception of the magazine in 1949, available in PDF form to all subscribers. We have also launched an online-only subscription program. Online-only subscribers, like print subscribers, will have full access to MR’s entire archive. As always, though, MR’s continued existence depends on its MR Associates. Associates receive a regular subscription to the magazine (both print and online), one free book, and a 50 percent reduction on all Monthly Review Press titles. Please consider becoming an Associate; the various options for subscription to MR are to be found at https://monthlyreview.org/subscriptions/.

Nadine Gordimer, the South African author who won the Nobel Prize in Literature in 1991, died at age 90 on July 13, 2014. Gordimer was an indomitable fighter for freedom in South Africa and throughout the world. One of her last publications was her long, moving foreword to Alan Wieder’s Monthly Review Press book, Ruth First and Joe Slovo in the War Against Apartheid (2013). The foreword is available on the Monthly Review Press webpage at https://monthlyreview.org/press/.

The Return of Fascism in Contemporary Capitalism
A Defining Moment: The Historical Legacy of the 1953 Iran Coup