Dear Reader, we make this and other articles available for free online to serve those unable to afford or access the print edition of Monthly Review. If you read the magazine online and can afford a print subscription, we hope you will consider purchasing one. Please visit the MR store for subscription options. Thank you very much. —Eds.
Notes from the Editors
by The Editors
(Jan 01, 2015)
Topics: History Marxism Socialism Places: Americas England Europe Germany United States 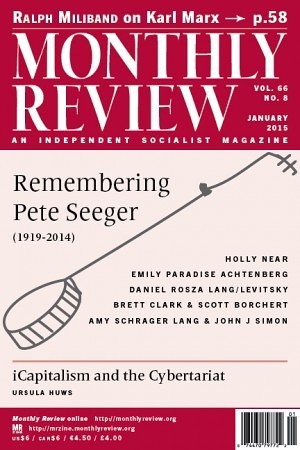 The publication of socialist books in the United States has always encountered serious institutional obstacles. This can be seen in the enormous hurdles that stood in the way of the successful publication 130 years ago of the English translation of Engels’s The Condition of the Working Class in England (1845)—today recognized as the classic account of the impact of the Industrial Revolution on workers. In 1885 Florence Kelley (-Wischnewetzky), the daughter of William D. Kelley, a U.S. Congressman and supporter of Lincoln, translated Engels’s book into English. Her initial plan was to publish the translation in the United States with the respected publishing firm of G.P. Putnam & Co. However, Putnam declined to publish it on the grounds that the book was outdated (even though it was to be presented as an historical work with a new preface and a new appendix by the author) and did not apply to U.S. industrialization, where such conditions of class exploitation were supposedly absent. (Florence Kelley was to be appointed the chief factory inspector in Illinois a few years later and was herself to provide the definitive refutation of Putnam’s claim, revealing the horrific conditions in the factories, sweatshops, and tenements of Chicago, which rivaled Engels’s descriptions of Manchester in 1844.)

While Kelley continued to reside for a time in Zurich (where she had translated the book), her friend Rachel Foster, secretary of the National Woman Suffrage Association, took up the task of finding a publisher. Foster, who had inherited a substantial sum of money, agreed to put up the entire cost of printing the book. On this basis she doggedly made the rounds of publishers in New York. Finding doors constantly closed in her face, she finally went to the executive of the Socialist Labor Party (SLP), which agreed to bring out the book, with Foster picking up the bill. (The SLP at that time mostly consisted of German-American émigrés, predominantly Lassalleans and some Marxists. The principal division was over trade unionism, with the Lassalleans hostile and the Marxists supportive.)

Engels was deeply disturbed by the decision to have the SLP publish his book, which he thought would weaken its chances of success and place him in a compromised political position. In the end, the SLP took the money from Foster, but did not publish the book, due to a number of internecine political disputes. Instead, the unbound sheets were handed over to the publisher John W. Lovell Co. to bind and sell. Lovell’s firm (known as “Book-A-Day Lovell” for the masses of cheap books it published) did a poor job selling it, and in a few years the firm itself failed. It was only in 1892, when an edition of Kelley’s translation was brought out in England by Swan Sonnenschein & Co., that the book was to sell in substantial numbers, remaining in print ever since.

It is owing to these difficulties, associated with the U.S. publication of his book, that we have the benefit of some of Engels’s more important comments regarding the problem of publishing socialist works in a capitalist society. Both he and Marx recognized that books published directly by social organizations themselves faced serious roadblocks because “the booksellers will not deal in works published by outside establishments, belonging to a workingmen’s party. This is why Chartist and Owenite publishers are nowhere preserved and nowhere to be had, not even in the British Museum and why all our German party publications are—and were, long before the Socialist Law—not to be had through the trade, and remained unknown to the public outside the party. That is a state of things which sometimes cannot be avoided but ought to be avoided wherever possible.” Engels pointed out that Marx and he had suffered from this affliction of socialist books for forty years. Ironically, even the most important socialist works were dependent for their success on being “brought out by a firm known in the bourgeois trade” and “accessible to the public generally and everywhere.” (See Karl Marx and Frederick Engels, Letters to Americans, 1848–1895 [New York: International Publishers, 1953], 144–45, 150–51, 158–60; Dorothy Rose Blumberg, Florence Kelley [New York: Augustus M. Kelley, 1966], 43–97; Kathryn Kish Sklar, Florence Kelley and the Nation’s Work [New Haven: Yale University Press, 1995], vol. 1, 359. On the John W. Lovell Co. see http://sdrc.lib.uiowa.edu/lucile/publishers/lovelljw/Lovelljw.htm.)

These same contradictions have persisted into the twentieth and twenty-first centuries. In order to satisfy needs that establishment publishers cannot or will not fulfill, the left has had to create its own independent publishing houses. Monthly Review Press itself was established in 1952 when I.F. Stone, one of most renowned independent journalists of the day, could not find a publisher for his book, The Hidden History of the Korean War. Today most commercial publishers remain reluctant to publish radical or socialist books, and when they do a tacit requirement is that the voice of such works be toned down so as not to offend liberal readers. To be sure, there is at present a considerable academic market, which brings out some Marxist works, but such university press books are generally written by academics for academics, are vetted through a process of “peer review” that often seriously constrains critical analyses, and are now commonly priced for libraries, out of the reach of ordinary buyers. All of this means that there remain a large number of top-notch book manuscripts written by left thinkers who look expressly to a handful of small, independent radical publishers. Yet to survive, these small left publishers have to exist within the regular book trade, which is becoming more concentrated and centralized every day. Few socialist and left publishers are able to last under these onerous conditions. A recent casualty was South End Books.

Monthly Review Press’s own persistence, despite limited resources and a rapidly centralizing book market, is a product of the support of MR Associates, together with the genuine value and historical importance of the works published, which display an unswerving radical-socialist commitment. Monthly Review Press’s achievements over the last year are indeed remarkable. Choice (the review journal for academic libraries) has just announced this month (January 2015) that Paul Le Blanc and Michael D. Yates’s A Freedom Budget for All Americans: Recapturing the Promise of the Civil Rights Movement in the Struggle for Economic Justice Today (2013) has won its “Outstanding Academic Title” award—an award given to less than three percent of the tens of thousands titles submitted to Choice each year for this distinction. Choice also honored both John Bellamy Foster’s The Theory of Monopoly Capitalism (2014, new edition) and John Tully’s Silvertown (2014) with its “Highly Recommended” distinction. Meanwhile, Publisher’s Weekly has declared that Robert W. McChesney’s Blowing the Roof Off the Twenty-First Century (2014) is a “scathing and unflinching look at American culture, media, and politics…. Anyone who gives McChesney’s lucid, accessible State of the Nation his or her time will find it worthy of thought and discussion.” The prestigious Kirkus Reviews has written of John Marsh’s book about Walt Whitman, In Walt We Trust: How a Queer Socialist Poet Can Save America from Itself (forthcoming, February 2015): “Marsh confesses his love for the legendary poet, and by the end of his insightful homage, readers are likely to feel the same.” Those wishing to learn more about or to purchase these books should go to https://monthlyreview.org/press/.

Judging from the correspondence we have received and various articles/blogs we have seen the Review of the Month for November by John Bellamy Foster and Michael D. Yates, “Piketty and the Crisis of Neoclassical Economics,” was well received, and created quite a stir. We thought MR readers would be interested in this excerpt from a much longer letter from our friend and labor organizer Elly Leary:

What I appreciated so much was that you placed the work in context. Piketty is not a Marxist—just a social democrat who wants capitalism with a human face…. What also struck me about the Piketty book and analysis was how neatly its voluminous statistics backed up Samir Amin’s central thesis that this state of capitalism requires a worldwide class of “expendables”—people that the system doesn’t need and frankly, would rather they were not there (or die from the plague, die from lack of medical care, die from civil war, whatever) so that resources wouldn’t be wasted…. [Yet] the expendables (surplus people) exist and are growing.

We think that Leary raises the crucial questions here. A society that puts capital accumulation before all else inevitably reduces the vast majority of the population of the earth (and future generations) to mere “expendables.” It is up to the left to turn the surface interpretation of global injustice represented by thinkers like Piketty into a deeper, real-world, theory-movement (praxis) to change it. (On Samir Amin’s analysis, mentioned by Leary, see his The Implosion of Contemporary Capitalism [New York: Monthly Review Press, 2013], available at https://monthlyreview.org/press/.)