Dear Reader, we make this and other articles available for free online to serve those unable to afford or access the print edition of Monthly Review. If you read the magazine online and can afford a print subscription, we hope you will consider purchasing one. Please visit the MR store for subscription options. Thank you very much. —Eds.
by Holly Near
(Jan 01, 2015)
Topics: History Media Places: Americas United States
For over forty years, Holly Near has been singing for our lives, articulating world events and personal politics though the power of song. With great skill, Near uses her powerful voice and theatrical style on stage to invite creative critical thinking, laughter, and community.

Pete Seeger was bigger than life. And like a character in a mythological tale, before long his shoe size will grow to such a degree that he will scale snowy mountains and wade across oceans. He will look over the tops of Redwood trees and when he dips his hand down into the Hudson River, the water up to his elbow, his fingers will reach down to the bottom of the deepest pool and pull up a giraffe and a baby grand and we will forever sing about the magic river.

This mythology will be enjoyed by the living for generations to come. A next generation of troubadours will sing deep into the little faces who, with wide eyes, imagine such a music man.

Pete? He may roll his eyes and hope everyone returns quickly to the truth OR he may enjoy becoming part of a new “Abiyoyo,” a tale that will sprout banjos of unprecedented size and color and confront the mean fearful spirits of a creature named “houseofunamerianactivitiescommittee”—a wild and inexplicable society of exaggerated creatures with a name so long that only Mary Poppins will attempt its unraveling.

Other mystical visions will dance across the mountain: a Chilean troubadour who nightly passes over the walls of a great stadium and returns to the snow-capped Andes; a Spanish painter who puts limbs and breasts and horses’ heads where none have ever been before; an African American contralto who defies freezing temperatures with simply the sound of her voice and invites a nation to put on its Sunday best.

So it will go, until Pete is no longer a man. In truth, we who have come to mistrust our challenging species, feel relief to know that he was not quite made of the same stuff as the rest.

The sweet children left standing on the sides of playgrounds, last chosen for the teams, will find solace in odd stringed instruments and drums made of garbage cans. They will scale rock so as to wander up behind the banjo now carved into the big stone mountain alongside the heads of presidents. They will survive the bully or the drunken uncle by flatpicking “Freight Train” left-handed and right-handed and Elizabeth Cotton-handed and may someday come to ask, “Who was this Pete fellow?”

And because of who they are, they will find the rough edges, the moments of doubt, the facts of privilege, the courage of political conviction, the actor who knew the power of theater and mythology.

In amazement, they will read the disappointed ramblings of aging folk critics who declare, “Pete was the last of the great political folk singers so let’s name bridges after him.” The children will laugh and, without hostility, they will have the good sense to say, “Really? What about me? I know the same chords. I know how to tell a really good story. Only I am living NOW rather than THEN. And those of us living now are seldom seen until we are invited into that part of memory that is called then.”

The shaman children (who can no longer be identified by a color or a gender because, as the new story will soon reveal, everything went all twirlywick) will discover that there are reasons why “Pete Seeger” was even possible. They will toss the story of Pete into the air and watch a thousand red ‘n gold leaves from the trees of Beacon land in the shape of notes in the bottom of a tea cup.

Old women with hair the color of glaciers and fingers as long as an ax handle will groan, for although the historic reasons for “Pete” will never return in the same shape and form, never be repeated in his image, the dangerous song will come again. How the women wail! “Beware! The reason for the song will be repeated again and again, for it always has and it always will, for pete’s sake.”

And the grieving laughter will shriek along the trail of tears, the appalachian trail, the slave trade routes, the locked windows of the triangle shirtwaist factory, the hanging ropes in the town square of salem, the institutions where sane people went crazy, the hidden paths to camps of internment, the hospitals strewn with roses and bodies of people with AIDS and cancer. Beware the tall tale, the witches will cry. Gather the instruments of music so they will not be destroyed in fire.

The storytellers rest for a moment, exhausted by their theatrical recollection of a time well lived. And the scholars, in somewhat more refined tones, will remember that there could not have been a Pete without a Woody, without a Toshi, without a Harold Leventhal, without the Weavers, without children, without the guardians of children, without a civil rights and labor movement, without songs being covered by pop stars and producing large royalties, without commie summer camps—even without the McCarthy hearings. And in understanding that, they will understand why Pete’s longevity became historic glue.

The children, now musicologists and anthropologists, will hopefully include race, class, gender, technology, capitalism, and all such things in their toolbox of research, which by design, complicates the ways in which we remember Pete Seeger and his legacy.

And these little faces, now grown round and wise, will learn to interpret the intentional silence, the revisionist history, the rounding off of edges. When they see Hudson River, they will insist on adding the words pollutants and factories. When they see the words “We Shall Overcome,” they will demand the words lynching and racism. When they hear the song “Wasn’t That a Time,” they will connect it to the current war and ask why children are sent to die as the first line of defense and know there was good reason why Pete was not allowed to sing his song at the HUAC hearings. They will insist that Pete Seeger was a radical voice for Peace AND Justice. And they will know that he came from education and privilege and did not walk his path alone.

And if they dig a little deeper, they will be relieved to know that icons were not always icons. They had their own ups and downs. And they will notice how we, the living, choose to celebrate these giants and, at the same time, remember that they were not always giants.

Not all, but some, will be wise enough to know that when we honor one and lift that one to iconic stature, we must honor all. We must honor everyone in the social change activist circle around the world who writes, performs, presents, funds, works in service, is imprisoned, followed, and left unemployed even by allies. WE must honor all the troubadours who survive (and those who do not) the life-threatening hazards of telling the truth.

The children, who now no longer wait to be chosen for the team, know that they ARE the team. And if they be vigilant, they will wisely avoid the dangers of honoring our icons, singling them out to such a degree that we forget the hundreds and thousands who hold space for such an icon to flourish. They will ask, without malice, “Has Martin Luther King become more famous than the Civil Rights Movement? Is Victor Jara more remembered than the murdered and disappeared of which he was one? Is Pete Seeger held up so high that memory leaves the banjo in the dust?”

We are artists at heart and whether heard or paid or remembered, we know we are essential to the well-being of soul itself. The poem of Maya Angelou about the morning is more remembered than anything else that happened that day.

We do not know what kind of man John Lennon would have become, but he left a song and it is sung every day in Central Park. In the U.S. military, women sitting around drinking warm beer might ask one another whether they have heard the song “A Gym Teacher” by Meg Christian and, based on the answers, they will know if they can breathe out. The children of Soweto, with no possible reason to believe, danced in the dust and rekindled the lost integrity of people all over the world.

And so, dear artists, be brave. The world will not spin without you. This is hard work, this singing and dancing and painting and acting and drumming and fiddling and filmmaking. Hard work is this truth telling, this noticing. We may get the attention of a thousand or the attention of one. We may see our work financially supported or, more times, not. We may be dismissed for being too political or too feminist or too lesbian or too fat or too dark or too angry or too young or too polished or too loud or too simplistic or too everything worth being. We may be compared to the giants, held up against their light. Still, may we all remember that we are who we are, each carrying a note required in the larger chord.

And the children, especially the children, must be loved and listened to. Can we resist the temptation to compare them to ourselves or to what went before? Ah look! Watch them blossom in our appreciation. Watch them grow up to be their own giants.

And around the campfire, when we know in our hearts that there are better songs than “99 Bottles of Beer on The Wall,” let us remember the man with a footprint so grand he scaled Hitler’s grave and waded across the big muddy. Remember the singer who wondered where have all the flowers gone and mused over hammers, bells, and songs alongside danger, warning, and love. Remember the inquisitive mind that, with one raised hand, taught us to sing our best notes for our rainbow race. Remember the spirit that invited us to come along to go sailing down a golden river en route to old devil time. And if it is late and the campfire embers are fading, you might hear one elder storyteller who no longer sleeps reminisce of the time the big fellow magically pulled out of the Hudson River, a giraffe and a baby grand.

Note: On a sloop tour of the Hudson, a sailor described to me items dredged up during the cleaning effort. Among them were a giraffe and a baby grand, tossed into the mighty Hudson late one night when no one was noticing. I have no proof but it’s the stuff of which “Once Upon a Time” is made. 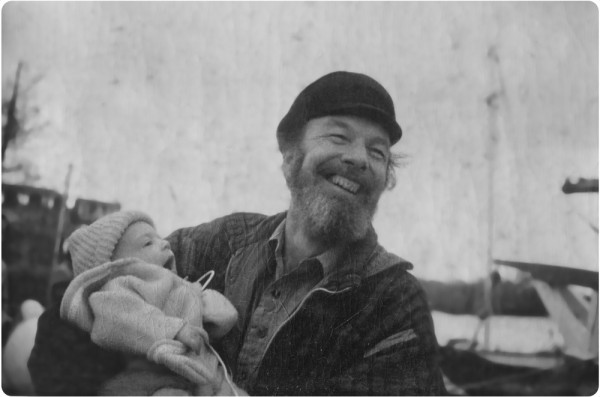 View all posts by Holly Near →