Dear Reader, we make this and other articles available for free online to serve those unable to afford or access the print edition of Monthly Review. If you read the magazine online and can afford a print subscription, we hope you will consider purchasing one. Please visit the MR store for subscription options. Thank you very much. —Eds.
Notes from the Editors
by The Editors
(May 01, 2015)
Topics: History Imperialism Places: Americas Asia United States Vietnam 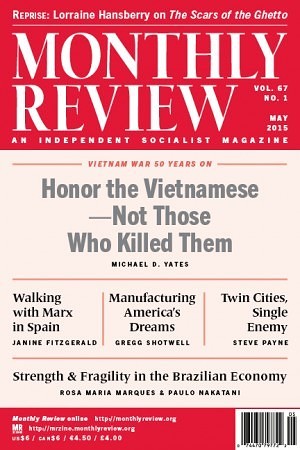 As we write these notes in March 2015, the Pentagon’s official Vietnam War Commemoration, conducted in cooperation with the U.S. media, is highlighting the fiftieth anniversary of the beginning of the U.S. ground war in Vietnam, marked by the arrival of two Marine battalions in De Nang on March 8, 1965. This date, however, was far from constituting the beginning of the war. The first American to die of military causes in Vietnam, killed in 1945, was a member of the Office of Strategic Services (a precursor of the CIA). U.S. intelligence officers were there in support of the French war to recolonize Vietnam, following the end of the Japanese occupation in the Second World War and Vietnam’s declaration of national independence as the Democratic Republic of Vietnam. The French recolonization effort is sometimes called the First Indochina War in order to distinguish it from the Second Indochina War, initiated by the United States. In reality, it was all one war against the Viet Minh (Vietnamese Independence League). By the time that the Vietnamese defeated the French at Dien Bien Phu in 1954, the United States was paying for 80–90 percent of the cost of the war. The United States attended the Geneva Conference following the French defeat, but did not sign the Geneva Accords and refused to be bound in its future actions by them.

The Geneva Accords established a temporary line at the 17th parallel to facilitate the regroupment of troops that had been involved in the combat; the Viet Minh troops pulled back north, and the French troops south, of the parallel. This was to prepare for the removal of all foreign troops and the holding of elections throughout the country, scheduled for 1956. Yet, rather than allowing the elections to proceed—since, as Eisenhower acknowledged, Ho Chi Minh would have won 80 percent of the vote—the United States supported the formation of a dictatorship under Ngo Dinh Diem in the southern part of the country. The 17th parallel was thus converted, in violation of the Geneva Accords, into a dividing line between two separate countries, the Democratic Republic of Vietnam in the north, and the newly created Republic of Vietnam under Diem’s dictatorship in the south. Diem’s rise was followed by a terror campaign against the Viet Minh. This ultimately failed and Diem was removed from power and killed in a coup in 1963 under the direct supervision of Washington, after which a succession of puppet regimes, controlled by the United States, were established in the south.

By 1964 the White House clearly had decided on a full-scale military escalation in Vietnam including direct use of ground troops. A pretext, however, was needed. This was provided by the so-called Gulf of Tonkin Incident on August 4, 1964, according to which North Vietnamese torpedo boats were said to have made an “unprovoked attack” on U.S. destroyers in international waters—although no attack had occurred. Johnson’s repeated false statements in this regard to the American public were used to justify the massive U.S. invasion beginning in March 1965. By 1967, the invading U.S. forces had risen to 400,000, and by 1968 to 500,000. More than 3 million Vietnamese, most of them civilians, died as a result of the war (“Fifty Years of Violent War Deaths from Vietnam to Bosnia,” British Medical Journal [2008]), along with over 58,000 U.S. soldiers.

Although the Pentagon has set up an “Interactive Timeline” on the Vietnam War, it downplays U.S. support of the French attempt to recolonize the country; leaves out Washington’s refusal to go along with the Geneva Accords; avoids mentioning Washington’s role in bringing Diem to power and then disposing of him; and excludes the fabrication of the Gulf of Tonkin Incident. Hence, the distorted history being constructed by the present Pentagon-directed Vietnam War Commemoration constitutes a major propaganda effort designed to whitewash the war.

Monthly Review subscribers have at their disposal in the magazine’s archives (https://monthlyreviewarchives.org) one of the best running commentaries on the Vietnam War from the time. Some of the articles by Monthly Review editors Paul M. Sweezy, Leo Huberman, and Harry Magdoff were published in the collection Vietnam: The Endless War (Monthly Review Press, 1970). To counter the Pentagon’s Interactive Timeline, we are placing Jayne Werner’s “A Short History of the War in Vietnam” and Magdoff and Sweezy’s “Lessons of Vietnam”—both written for the June 1985 Monthly Review—on our website for all to read. We are also publishing in this issue Michael Yates’s powerful Review of the Month: “Honor the Vietnamese, Not Those Who Killed Them.” Veterans for Peace has launched its own “Vietnam Full Disclosure” campaign (http://vietnamfulldisclosure.org), protesting the Pentagon’s distortions.

As Paul Baran and Paul Sweezy argued almost fifty years ago in Monopoly Capital, the K–12 education system in the United States is bound to reflect the overall inequality in the country. Nevertheless, the history of the U.S. education system has been governed by the struggle between a more democratic tradition promoted by teachers and parents (associated in the early twentieth century with John Dewey’s Democracy and Education) and a corporate-driven model of capitalist schooling. The civil rights movement and the rise of a renewed progressive-education movement in the United States in the 1960s and ’70s resulted in important educational advances. Since the 1980s, however, a neoliberal juggernaut has served first to starve the education system of funds, and then to blame teachers for the resulting failures and a growing race-based achievement gap (itself a product of regressive changes in the larger society). All of this has been used to justify the forced removal of the education system’s more democratic aspects. Under the Bush and Obama administrations, the corporate restructuring campaign in education has seemed unstoppable. However, it is now suddenly encountering its nemesis in the form of a massive groundswell of resistance from parents and teachers in nearly every state.

As Gates himself declared in 2013, this has opened up a multi-billion dollar market to educational testing companies. Corporations no longer have to cater to educational diversity, but can maximize their efficiency and profits by supplying standardized educational products to each state. The Common Core Standards/standardized tests are estimated to cost up to $12 billion to implement across the nation. The major monopolistic firms in the education industry (UK-based Pearson, Apollo Group-owned McGraw Hill, Houghton Mifflin Harcourt, and Apple) are receiving contracts worth billions. The standardized tests nominally cost $27 per student, but in reality this cost rises to $1,100 per student once administrative costs are included. Education industry firms obtain the bulk of their profits through the sale of test preparation tools (currently a $13 billion market), not to mention computer-related sales. Testing is thus one of the fastest growing areas of the economy. The standardized tests provided by the two consortiums are deliberately designed so that most students will fail, allowing the further turning of the screw and increased penetration of capital into education. All teaching is to be directed at assessments. Test results are used to evaluate and fire teachers, displace seniority, break union contracts, and close or privatize schools. So-called failing schools are compelled to devote more time to test preparation. The major private foundations involved in educational reform all support the replacement of traditional public schools with privately directed charter schools, mostly destined to be run by for-profit firms, but with public subsidies.

The good news is that a vast opt-out movement against high-stakes standardized testing is emerging from parents, teachers, and students. In New Mexico and New Jersey students themselves have organized against and refused to take tests. For background on this struggle see the special July–August 2012 Monthly Review on “Education and the Structural Crisis of Capital“; Henry Giroux, The American Education Deficit and the War on Youth (Monthly Review Press, 2013); “Companies Cash in on Common Core Despite Controversy,” CNBC, March 11, 2015; Valerie Strauss, “Five Reasons Standardized Testing Isn’t Likely to Let Up,” Washington Post, March 11, 2015; and “The Trouble with the Common Core,” Rethinking Schools, Summer 2013. On the opt-out movement itself see http://unitedoptout.com.

Roger Burbach, who died on March 5, 2015, wrote numerous articles for Monthly Review in the 1980s and ’90s and authored (with Patricia Flynn) Agribusiness in the Americas (Monthly Review Press, 1980). He was a relentless defender of Latin American liberation movements. His most recent book, written with Michael Fox and Federico Fuentes, was Latin America’s Turbulent Transitions (2013).

Corrections: We received a call from a retired farmer and MR subscriber in Iowa commenting on Fred Magdoff’s “A Rational Agriculture Is Incompatible with Capitalism” in the March 2015 issue. The caller said that it was “great work” and that the article “really nailed it down.” He did, however, have one correction: when discussing the confinement of sows after they have given birth, the article should have referred to “farrowing crates” instead of “gestation crates.” He is absolutely correct. However, it is important to point out that pregnant sows are kept confined with very little room in gestation crates until just before giving birth, when they are moved to confined farrowing crates. They are both parts of an inhumane system for producing meat as cheaply as possible.

Due to an error late in the production process of the same issue, some lines between page 56 and 57 were omitted in Bob McChesney’s “The Personal Is Political.” They should have read: “My program, in fact, was the beginning of a real balance at NPR and in the broader media culture. The station manager at WILL gave me unconditional support. It made it a pleasure for me to work there.

In the April 2015 MR, Eric Lichtblau’s name was misspelled on page 55 and 59. Additionally, Michael A. Lebowitz’s biography on page 18 should have indicated he worked as an adviser in Venezuela until March 1, 2011 (not 2015).

Honor the Vietnamese, Not Those Who Killed Them
Boycott, Divestment, and Sanctions at Ten Years