Dear Reader, we make this and other articles available for free online to serve those unable to afford or access the print edition of Monthly Review. If you read the magazine online and can afford a print subscription, we hope you will consider purchasing one. Please visit the MR store for subscription options. Thank you very much. —Eds.
Notes from the Editors
by The Editors
(Sep 01, 2015)
Topics: Imperialism Inequality Race Places: Americas Global United States 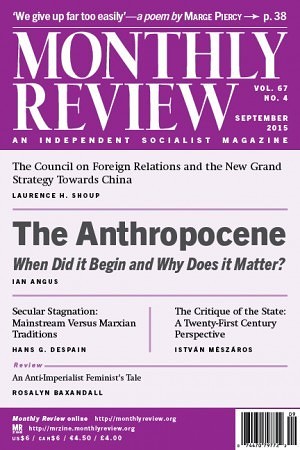 In this number of Monthly Review we are publishing Larry Shoup’s “‘Dangerous Circumstances’: The Council on Foreign Relations Proposes a New Grand Strategy Towards China”— an article published concurrently with his new Monthly Review Press book Wall Street’s Think Tank. Shoup informs us that Washington is increasingly focused on its declining power vis à vis Beijing. Consequently, leading figures in the Council on Foreign Relations are now proposing a much more aggressive imperial grand strategy aimed at China. In contrast, China has been adopting a more conciliatory stance. In preparation for President Xi Jinping’s visit to Washington this month, Beijing has been emphasizing cooperation and mutual understanding. Nevertheless, the growing push in U.S. higher circles for an upgraded imperial strategy with respect to China is reason for serious concern. The simple-minded notion that a declining power should promptly initiate conflict led, in the twentieth century, to great disaster. We have in mind the Tsarist and Hapsburg empires in 1914, when the governing circles and military of both reached this—for them and others—fatal conclusion. (For information on Shoup’s book see https://monthlyreview.org/books/cl5519/.)

The July–August 2015 issue of MR on “The New Imperialism of Globalized Monopoly-Finance Capital” focused on ongoing transformations in the political economy of the capitalist world system. Today accumulation in the center is even more dependent than in the past on capturing value produced in the periphery, with the result that imperialist expansion and exploitation is more, not less, important for the system. This has led to a resurgence of Rudyard Kipling’s racist conception of the “white man’s burden,” this time in the sheep’s clothing of “humanitarian intervention.”

In the U.S. case, imperialism has always been closely tied to a system of racial domination at home. As W.E.B. Du Bois wrote some sixty years ago in “Negroes and the Crisis of Capitalism in the United States” (Monthly Review, April 1953; reprinted in April 2003),

The United States, with its existing social structure, cannot abolish the color line despite its promises. It cannot stop injustice in the courts based on color and race. Above all, it cannot stop the exploitation of black workers by white capital, especially in the newest South. White North America beyond the urge of sound economics is persistently driving black folk toward socialism. It is the United States which is straining every effort to enslave Asia and Africa, and educated and well-to-do black Americans are coming to know this just as well as anybody. They may delay their reaction; they may hold ominous silence. But in the end, if this pressure keeps up, they will join the march to economic emancipation [the struggle against capitalism], because otherwise they cannot themselves be free (41, in the 2003 version).

Despite the gains of the civil rights era, the reemergence of what is now called the “New Jim Crow,” based on the mass incarceration and repeated police killings of unarmed black men, shows that the old systems of racial control have been “modernized” in the present, maintaining the color line, if in modified fashion: not only in relation to black Americans—though they have a special position emerging out of the whole legacy of slavery (as witnessed by the current dispute over the Confederate flag)—but also with respect to all other people of color as well. As MR Associate Editor Michael Yates wrote in “It’s Still Slavery By Another Name” (February 23, 2012, http://cheapmotelsandahotplate.org):

We are left with an inescapable conclusion. Having a black skin, in and of itself, is a grave economic and social disadvantage, while having a white skin confers considerable advantage. That this is true today, 146 years after the end of the Civil War, after three constitutional amendments, the great civil rights movement, a large number of civil rights laws, and lord knows how many college courses and sensitivity training sessions is testament to the power and tenacity of discriminatory social structures.

The new Black Lives Matter movement, that has emerged in response to the color line and the lethal repression used to enforce it, represents the resurgence of one of the great struggles for emancipation in human history. However, the future of the movement depends on recapturing the historical legacy of black struggle in the United States, and its connection to the global struggle over imperialism. This is the message conveyed by Benjamin Woods, co-founder of Students Against Mass Incarceration and a Ph.D. candidate at Howard University. In a piece entitled “From Marikana to Ferguson,” published on his blog in January of this year, Woods compared the radical black movements developing in response to police repression in South Africa and the United States, arguing that,

because of the political repression of McCarthyism and Cointelpro, this generation, my generation, has not had the same level of political continuity and mentorship as our counterparts in South Africa. For example [Julius] Malema and other leaders in EFF [the South African Economic Freedom Fighters organization] received part of their political education in revolutionary Cuba…. The EFF strategy of “economic emancipation in our lifetimes” and a national assembly to create a political program, point a way forward for the Black movement in the U.S.

A radical political project in the United States, Woods argues in his July 8, 2015, article on his blog, “Six Lessons #BlackLivesMatter Can Learn from Cabral,” should draw on the legacy of African figures such as Amilcar Cabral, the revolutionary leader of the African Party for the Independence of Guinea and Cape Verde, who was assassinated by the Portuguese political police shortly before independence was won. Cabral, like Du Bois and Walter Rodney, represented a materialist, Pan-African socialism. Cabral is famous for his statement that “nobody has yet successfully practiced Revolution without a revolutionary theory” and for his efforts to link political economy and culture. In a speech to black Americans in 1972, entitled “Connecting the Struggle,” Cabral stated, “It is also a contribution for you to never forget that you are Africans.” As Woods states, “the important lesson in this instance is for people of African descent to make practical connections across national borders in their struggles for self-determination.”

Woods is just one of a talented group of younger theorists, activists, and writers associated with Black Agenda Report. See his blog, FreeTheLand, http://free-the-land.blogspot.com, and his writings for the Black Agenda Report, http://blackagendareport.com. Cabral’s Unity and Struggle and Return to the Source are both available from Monthly Review Press at http://monthlyreview.org.

So massive and coordinated has been the onslaught against K–12 education in the United States that many of those standing for a non-corporate-driven education system have been caught unawares, unable to understand the power relations involved, entrapped in an ideological web which deceptively employs the language of equality to legitimate the corporatization and privatization of education, while all the time closing down the schools of the poor and underprivileged. In her new book Common Core Dilemma: Who Owns Our Schools? (Teacher’s College Press, 2015), teacher and education activist Mercedes Schneider details how corporate foundations, such as the Gates Foundation, and the education industry, represented by firms such as McGraw Hill and Pearson, have worked with the National Governor’s Association and the Council of Chief State Officers to create a kind of legal “no-man’s-land” between the federal and state governments impervious to any kind of democratic public control. The Common Core State Standards, the main lever for restructuring the education system, are designed by monopolistic educational corporations and copyrighted by the above-mentioned quasi-governmental organizations, which then become its owners and controllers. The Common Core is then foisted on the states by federal government mandates in a process outside public control and democratic accountability. The reason, Schneider tells us, is simple: “The profit margins of the Big Boys. It reduces public education to a dollar sign” (192–93).

In 2012 Occupy Wall Street activists and students in East Williamsburg, Brooklyn, founded the Paul Robeson Freedom School (for ages ten to fourteen), modeled after the Freedom Schools of the famous Freedom Summer struggle in Alabama and Mississippi in 1964. Today, in its fourth year, the school, led by the “The Robeson Fighters”—those who struggled to save and transform their school—continues its mission of Education for Liberation! For more information or to give support go to http://paulrobesonfreedomschool.org.

MR readers who enjoyed reading Stefano B. Longo, Rebecca Clausen, and Brett Clark’s “Capitalism and the Commodification of Salmon: From a Wild Fish to a Genetically Modified Species” in the December 2014 issue of the magazine will be interested to know that a book by the same authors, The Tragedy of the Commodity: Oceans, Fisheries, and Aquaculture, has just been published by Rutgers University Press. Their book is nothing less than an attempt to apply critical ecological materialism to the analysis of various crises threatening the world’s oceans, as well as fish species and habitats.

Corrections: On page 62 of the Notes from the Editors in the June 2015 issue of Monthly Review the correct spelling is Rockström. On page 16, paragraph 3 of “The New Imperialism of Globalized Monopoly-Finance Capital” by John Bellamy Foster, in the July-August 2015 issue, the reference to “$13 trillion” should have read “£13 trillion or $21 trillion.” In Janine Fitzgerald’s “Marx on the Camino de Santiago” in the May 2015 issue, on page 56, it should be “2 trillion euros” instead of “2 billion.”

When Did the Anthropocene Begin…and Why Does It Matter?
The Part of “Illegal” They Don’t Understand