Dear Reader, we make this and other articles available for free online to serve those unable to afford or access the print edition of Monthly Review. If you read the magazine online and can afford a print subscription, we hope you will consider purchasing one. Please visit the MR store for subscription options. Thank you very much. —Eds.
Notes from the Editors
by The Editors
(Feb 01, 2016)
Topics: Climate Change Ecology Political Economy Stagnation Places: Europe France Global 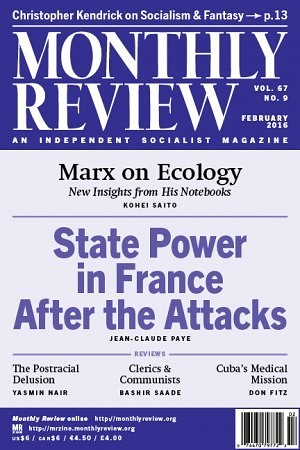 From mainstream news reports, one might easily conclude that the Paris climate agreement, presented to the world on December 12, 2015, was a complete triumph. The Guardian headlined it as “The World’s Greatest Diplomatic Success.” However, by any meaningful criteria, the Paris climate change agreement was fraudulent, based on a fabric of illusion. Moreover, the distorted media coverage of the climate deal, presenting it as a historical agreement virtually without shortcomings, was made possible in large part by the French government’s banning of the mass climate protests, following the November 2015 terrorist attacks in Paris. With radical protestors silenced and their demands marginalized, the global power elite could make virtually any public claims it wished, without acknowledging any other public voice or alternative view.

A close look at the climate agreement shows that the devil is in the details. The 196 countries party to the agreement reiterated the goal (established in Copenhagen in 2009) of keeping global average temperatures well below a 2°C increase, and even added that efforts should be pursued to limit it to a 1.5°C increase—a victory on paper for the most vulnerable nations. Yet the pledges made by individual countries (known as Intended Nationally Determined Contributions) would push global average temperatures up by as much as 3.7°C, with irreversible and catastrophic results. The agreement itself contains no legally binding limits to carbon emissions, includes no meaningful mechanisms for achieving its stated aims, would not even go into effect until 2020, and would be subject to reconsideration every five years. More important, it does a runaround with respect to reductions in greenhouse emissions. Although it states that “parties [to the agreement] aim to reach global peaking of greenhouse gas emissions as soon as possible…and to undertake rapid reductions thereafter,” it presents as its ultimate aim the achievement of “a balance between anthropogenic emissions by sources and removals by sinks of greenhouse gases in the second half of this century.”

The “balance” referred to here, to be achieved in 2050–2100, is what is called carbon neutrality (or greenhouse gas neutrality). It is the idea that there is no need for ultimate limits on the burning of fossil fuels provided that corresponding sinks to absorb the emissions are put in place, mainly in the forms of reforestation and what is called Bioenergy with Carbon Capture and Storage (BCCS), i.e., the burning of biomass, with the carbon captured and stored deep underground. In fact, the whole Paris agreement has as its unwritten premise the development of future “negative emissions” technologies such as BCCS that do not exist at present. Hence, the agreement has been characterized by Kevin Anderson, deputy director of the Tyndall Center for Climate Change in the United Kingdom, as “techno-utopian.” The climate deal also exempts from consideration all greenhouse gas emissions from international air traffic and shipping, despite the fact such emissions are now as great as those of Germany and the United Kingdom combined and are growing rapidly.

That a climate agreement of any kind was reached might be regarded as a significant achievement. Yet the present climate deal could turn out to be worse than nothing, insofar as it blocks real change. As James Hansen, the leading U.S. climatologist, declared of the Paris climate agreement,

It’s a fraud, really a fake. It’s just bullshit for them to say, ‘We’ll have a 2°C warming target and then try to do a little better every five years.’ It’s just worthless words. There is no action, just promises. As long as fossil fuels appear to be the cheapest fuels out there, they will continue to be burned.

In Anderson’s words, the Paris agreement overall is “weaker than [the] Copenhagen” agreement of 2009, and “not consistent with the latest science.” While “zero carbon energy technologies are a prerequisite of a 2°C future…they are far from sufficient. They will only deliver the necessary levels of mitigation if they are accompanied by fundamental changes to the political and economic framing of contemporary society.” See Oscar Reyes, “Seven Wrinkles in the Paris Climate Deal,” Foreign Policy in Focus, December 14, 2015; Jayanta Basu, “Climate Conference Goes Into Extra Time,” The Telegraph (Calcutta), December 12, 2015; Oliver Milman, “James Hansen, Father of Climate Change Awareness, Calls Paris Talks ‘A Fraud’,” The Guardian, December 12, 2015; Kevin Anderson, “The Paris Agreement,” December 13, 2015, http://kevinanderson.info; United Nations Framework Convention on Climate Change, December 12, 2015, http://unfccc.int.

The Review of the Month in this issue, “France: An Algorithmic Power,” by Jean-Claude Paye, takes us to the heart of the perilous politics of our time by addressing the French legal counterpart to the U.S. Patriot Act. Paye focuses on the development of all-encompassing (“panoptic”) surveillance and the rise of “algorithmic power,” by which populations, under the cover of anti-terrorism, are induced to consent to the permanent reduction of their own power and privacy vis-à-vis the state. He connects this to the recent terrorist attacks in Paris and the French government’s response, including the bans on street protests that silenced the climate demonstrators. Paye’s essay provides an important update to his article “Merging the Law of War with Criminal Law: France and the United States,” in MR‘s July–August 2014 special issue on “Surveillance Capitalism.”

These topics are closely related to two new books just published by Monthly Review Press: America‘s Addiction to Terrorism by Henry A. Giroux, and The Politics of the Right, the 2016 edition of Socialist Register, edited by Leo Panitch and Gregory Albo. In his book, Giroux highlights the terrorism promoted globally by the U.S. state itself, and its relation to growing fear and oppression domestically. In The Politics of the Right, leading left analysts point to the shading of neoliberalism into neofascism in many capitalist societies today. For further information and to purchase these books, go to monthlyreview.org.

In his last article for Monthly Review, “More (or Less) about Globalization,” from September 1997, Paul Sweezy referred to

the three underlying trends in the recent history of capitalism, the period beginning with the recession of 1974–75: (1) the slowdown of the overall rate of growth [secular stagnation]; (2) the worldwide proliferation of monopolistic (or oligopolistic) multinational corporations; and (3) what may be called the financialization of the capital accumulation process.

Orthodox neoclassical economists have long ignored all three trends, although they have long been documented in Monthly Review and elsewhere. However, a decade after Sweezy’s article was published, the great financial crisis of 2007–2009 and subsequent global economic malaise finally led some establishment economists, like Paul Krugman, to acknowledge stagnation, monopolization, and financialization, at least to some extent. Krugman’s most explicit discussion of monopolization is to be found in a recent review essay, “Challenging the Oligarchy,” in the December 17, 2015, New York Review of Books, addressing Robert Reich’s new book Saving Capitalism. Remarkably, Krugman says: “Here’s the thing: it’s obvious to the naked eye that our economy consists much more of monopolies and oligopolists than it does of the atomistic, price-taking competitors economists often envision.” Yet orthodox economists, he explains, found various ways to discount this essential fact—which, it turns out, “was both an intellectual and a policy error.” One might expect such an acknowledgement to be immediately followed by a discussion of the insights of Michał Kalecki, Sweezy, and a whole host of post-Keynesian and Marxist economists who put monopoly at the center of their analysis. Instead, Krugman presents the centrality of monopoly as a new insight.

We were therefore very much taken by the response of Marxian commentator Zoltan Zigedy, who wrote in his blog on December 20, 2015,

Where Krugman arrives is nothing short of amazing: he, no doubt unwittingly, describes an evolved capitalism that Marxists described well over half a century ago.… He urges that we consider the centerpiece of Reich’s study: monopoly power. It is the concentration of economic power in the hands of fewer corporate players that accounts for growing economic inequality.… So why did it take Reich and Krugman so long to arrive at this juncture, a place that Lenin visited a hundred years ago? Marxist writers like Paul Baran and Paul Sweezy devoted an entire influential book to monopoly capitalism nearly fifty years ago.

Krugman…attributes the mainstream economic neglect of monopoly to an influential paper written by Milton Friedman in 1953 that emphatically dismissed the effects of monopoly power on significant economic behavior. Thus, non-Marxist economists and their political allies have scorned the concept of monopoly power until recently, a concept that Marxists have made a centerpiece of their analyses for most of the twentieth century. (Zigedy, “After State Monopoly Capitalism?,” ZZ’s Blog, December 20, 2015, http://zzs-blg.blogspot.com)

All we can say with respect to Krugman, Reich, and other like-minded liberal economic commentators is: welcome back to “real-world economics,” as the Union for Radical Political Economics has long called it. Indeed, Reich’s book is based on the idea of restoring what John Kenneth Galbraith dubbed “countervailing power,” namely the power of unions, as essential to democracy. Even couched in Reich’s reformist terms as a policy for “saving capitalism,” such a stance, which Krugman describes as “in effect a call for class war” from below, is to be heartily welcomed today.

We would like to congratulate Makoto Itoh, author of the 1980 Monthly Review Press book Value and Crisis, for winning the 2015 JSPE-Routledge Book Prize. Founded in 1959, the Japan Society of Political Economy (JSPE) is the country’s largest grouping of heterodox economists. The prize, funded by Routledge, is awarded annually to a living political economist in recognition of her or his “lifetime achievement.” Itoh received the award based primarily on two more recent books, Political Economy for Socialism (Macmillan, 1995) and The Japanese Economy Reconsidered (Palgrave, 2000), but was also duly recognized for his lifelong political-economic critique of capitalism.

Corrections: During production of the January 2016 issue, several errors and omissions were made in the endnotes to articles by Christian Fuchs, John Tully, and Leontina M. Hormel. Please see the online versions of these articles on the Monthly Review website for corrected endnotes.

On the last line of page 25, the name of the translator of Marta Harnecker’s essay should have read Richard Fidler, not Fielder.

As this issue was going to press, we learned of the death of former MR Editor and author Ellen Meiksins Wood on January 14. The Notes from the Editors for the March issue will include a full appreciation of Ellen and her work.

France: An Algorithmic Power
Beyond Pedagogies of Repression