Dear Reader, we make this and other articles available for free online to serve those unable to afford or access the print edition of Monthly Review. If you read the magazine online and can afford a print subscription, we hope you will consider purchasing one. Please visit the MR store for subscription options. Thank you very much. —Eds.
Notes from the Editors
by The Editors
(Sep 01, 2016)
Topics: Democracy Inequality Movements Race Places: Americas Europe United Kingdom United States 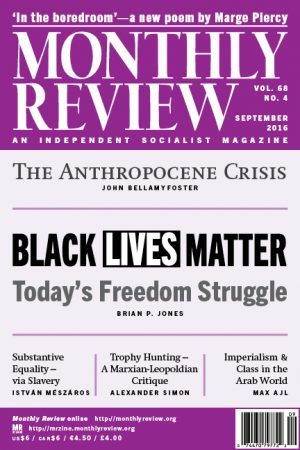 On July 14, 2016, Cornel West, a Monthly Review contributor and Monthly Review Press author (his 1991 book The Ethical Dimensions of Marxist Thought remains in print) issued a historic statement in the Guardian, under the headline “Obama Has Failed Victims of Racism and Police Brutality.” West wrote:

A long and deep legacy of white supremacy has always arrested the development of US democracy. We either hit it head on, or it comes back to haunt us…. I have deep empathy for brothers and sisters who are shot in the police force. I also have profound empathy for people of color who are shot by the police. I have always believed deliberate killing to be a crime against humanity. Yet, Obama didn’t go to Baton Rouge. He didn’t go to Minneapolis. He flew over their heads to go to Dallas. You can’t do that. His fundamental concern was to speak to the police, that was his priority. When he references the Black Lives Matter movement, it’s to speak to the police. But the people who are struggling have a different perspective….

The American empire is in deep spiritual decline and cultural decay. The levels of wealth inequality and environmental degradation [are] grotesque. The correct response to this is: tell the truth about what is going on. Bear witness. Be willing to go to jail to fight for justice if need be. When the system is declining, it can bring despair. That’s why Black Lives Matter—and all other young people of all colors who are mobilizing—is a beautiful thing. We are having a moral and spiritual awakening. It gives us democratic hope. It is not about having hope but being hope. It’s time to move from being spectators, to being actors.

West was a strong supporter of Bernie Sanders’s presidential campaign, and the article was part of an open rejection of what he called Donald Trump’s “neo-fascist” and Hilary Clinton’s “neo-liberal” and militarist strategies, and his public declaration of support of Green Party candidate Jill Stein. Yet while the mainstream news in the United States reported West’s declaration for Stein, very little of what he actually said about this and about Black Lives Matter and its relation to broader political struggles in the United States was covered. (See, for example, CNN, “Cornel West Endorses Green Party Candidate Jill Stein,” July 15, 2016.)

The Review of the Month in this issue, “Black Lives Matter and the Struggle for Freedom,” by Brian P. Jones, which examines Keeanga-Yamahtta Taylor’s new book From #BlackLivesMatter to Black Liberation, argues in the same tradition as West, that “Black people will no doubt lead any movement for black liberation, but…the question of black liberation should be an urgent concern for all people fighting for genuine freedom justice, and equality” (8).

Gerald Horne, author of Confronting Black Jacobins (Monthly Review Press, 2015) appeared on Democracy Now! on July 12 to discuss gun control and the Second Amendment and its relation to white supremacy. The interview can be found at http://monthlyreview.org/press.

In early July, MR editor John Bellamy Foster delivered a keynote talk on “The Anthropocene and Marxism Today” at the Marxism Festival in London. (It can be accessed on the Climate and Capitalism website, http://climateandcapitalism.com.) He gave special emphasis to the analysis provided in Ian Angus’s pathbreaking new book, Facing the Anthropocene: Fossil Capitalism and Crisis of the Earth System, just out from Monthly Review Press. Foster’s foreword to Angus’s book appears in this issue of MR under the title “The Anthropocene Crisis.” In his talk, Foster also spoke on the question of the deep division that has opened on the left, even among those who claim some connection to Marx’s ideas, on such questions as whether nature can be seen to exist at all, independent of human society and capitalism—or whether nature is now to be understood as subsumed or “bundled” by society, in a way that goes against the prevailing views of the radical ecological movement. This crucial question will be addressed in the next issue’s Review of the Month, “Marxism and the Dialectics of Ecology.”

Political events took an extraordinary turn in the United Kingdom in the early summer, beginning with the Brexit vote, in which a majority of British voters cast their ballots in favor of leaving the European Union. As a result, David Cameron abruptly stepped down as Prime Minister and was replaced by Conservative MP Theresa May. These events coincided with a number of attempts on the part of a majority of Labour Party MPs to force Jeremy Corbyn out of his position as the party’s leader. And in the midst of all of this came the long-awaited release of the official Chilcot Report, assessing the lies and deceptions used to justify Blair’s support of Bush’s invasion of Iraq.

A few pertinent points can be made about this complex situation. The Brexit vote was not, as commonly reported in the United States, simply a result of racist, anti-immigrant, anti-refugee sentiment, though that aspect cannot be discounted, given the role played by the United Kingdom Independence Party. It was also for many a vote against the neoliberal establishment in the United Kingdom and the European Union, and the austerity measures imposed under Cameron. It was thus a vote deeply affected by class and regional contradictions (in which London’s financial district, the City, was a main target).

Corbyn’s survival as Labour leader in this context has been based on his enormous mass support: party membership has more than doubled under his leadership, with registered members now totaling half a million. The basis of this mass enthusiasm for Corbyn—which has been compared to the Bernie Sanders campaign in the United States—is his strong advocacy of a movement toward socialism. Describing the differences between his policies and those of previous Labour (as well as Conservative) governments, Corbyn queried: “Do you want to be bargain-basement Britain on the edge of Europe, cutting corporate taxation, having very low wages, having grotesque inequalities of wealth? Or do you want to be a high-wage, high-investment economy that actually does provide decent chances and opportunities for all?” (“Jeremy Corbyn: Labour Could Win Snap General Election,” Guardian, July 29, 2016). Corbyn has openly opposed imperialism in all of his positions, whether with respect to Palestine, the invasion of Iraq (praising the Chilcot report and condemning Blair’s previous Labour Party government for duping the population and leading them into the war with disastrous consequences), or the question of new nuclear submarines. Currently, Corbyn faces a leadership election that will be decided on September 24. (We hope to run a more thorough analysis of Corbyn’s rise in a future issue.)

As for the new Conservative Prime Minister Theresa May, she began her first day in office by closing the UK Department of Energy and Climate Change.

John Bellamy Foster and István Mészáros have issued a call to MR friends and associates to help save the Georg Lukács archive, which is under attack by Hungary’s right-wing government. For more information, visit https://monthlyreview.org/press/save-the-georg-lukacs-archive.