Dear Reader, we make this and other articles available for free online to serve those unable to afford or access the print edition of Monthly Review. If you read the magazine online and can afford a print subscription, we hope you will consider purchasing one. Please visit the MR store for subscription options. Thank you very much. —Eds.
Review
by Kohei Saito
(Oct 01, 2016)
Topics: Ecology Marxist Ecology Places: Global 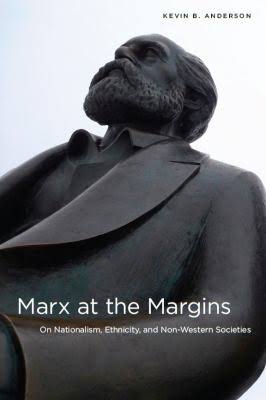 Kohei Saito is a visiting scholar at UC-Santa Barbara and a Japan Society for the Promotion of Science postdoctoral fellow. His first book, Natur gegen Kapital (Campus, 2016) has just been published.
Kevin B. Anderson, Marx at the Margins: On Nationalism, Ethnicity and Non-Western Societies, expanded edition (Chicago: University of Chicago Press, 2016), 344 pages, $25, paperback.

Recent years have seen the development of a fresh area of research into Marx’s critique of political economy, based on his previously unpublished economic manuscripts and notebooks, which have been made newly available in the updated edition of the complete works of Marx and Engels, the Marx-Engels-Gesamtausgabe (MEGA).1 Lucia Pradella published the first detailed analysis in English of Marx’s London Notebooks, and Brill’s Historical Materialism book series recently celebrated its hundredth volume with a translation of Marx’s original manuscript for volume 3 of Capital, based on the new MEGA edition. The same series also published Heather Brown’s Marx on Gender, which drew extensively on his late notebooks.2 And earlier this year, the second, expanded edition of Kevin Anderson’s Marx at the Margins: On Nationalism, Ethnicity and Non-Western Societies appeared. The first edition of Anderson’s book, published in 2010, inaugurated this new trend in Marxist studies, and it remains among the most important achievements in the field.

The book’s title can be read in two ways: it not only addresses Marx’s analysis of marginalized (i.e., peripheral) societies under capitalism, but also the marginalized texts of Marx’s own work, such as his newspaper articles, the French edition of Capital, and, most importantly, his research notebooks. Six years on, this latter sense of “marginality” is gradually but surely changing, due in no small part to Anderson’s pioneering work. Due to his careful study of Marx’s marginal writings and notebooks, the book has opened both a new path for research and a strong tool to counter familiar criticisms of Marx’s “productivism” and “economic determinism.” Anderson and other scholars have persuasively shown that the depth and diversity of Marx’s critique of capitalism extended to such supposedly neglected areas as race, gender, and ecology.

In the second edition, Anderson finds the original task of the book fulfilled: to “undercut the fashionable argument that Marx was fundamentally a Eurocentric thinker trapped in the narrow frameworks of his time, the mid-nineteenth century, and thus largely impervious to contemporary issues like race, gender, and colonialism” (vii). Critics have long claimed that Marx’s theory assumed, with a mixture of optimism and condescension, that the development of productive forces in Western European countries would be the driving factor in a historical progress toward socialism, even if it produced misery and destruction in peripheral, colonized societies. Marx was the target of repeated criticism by postcolonial scholars such as Edward Said, who accused both Marx and orthodox Marxism of a naïve, orientalist affirmation of the “great civilizing influence of capital,” which effectively ignored the cruel reality of the colonized countries.

Anderson concedes that Marx, from the Communist Manifesto through his New York Daily Tribune articles on India in the early 1850s, was still trapped by the prevailing ethnocentrism of the time, and did believe uncritically in the progressive character of capitalist domination in the colonies (237). Thus it is not wrong to accuse Marx, in his earlier writings, of imposing a Eurocentric, unilinear vision of history on non-Western countries, though even these works include descriptions of British domination as “barbarism” (238).

However, as Anderson demonstrates, Marx’s critique of capitalism grew far more subtle and sophisticated as a result of his theoretical and practical engagement with the Taiping Rebellion, the Second Opium War, the Indian Rebellion, and the American abolitionist movement against slavery. The decisive change came in the late 1860s, when Marx voiced his unequivocal support for Irish independence. In an 1869 letter to Engels, he wrote: “The English working class will never accomplish anything before it has got rid of Ireland. The lever must be applied in Ireland. This is why the Irish question is so important for the social movement in general.”3 Marx not only argued that the English working class could not entrust the eventual emancipation of their Irish counterparts to the development and expansion of British capitalism; he maintained that English workers could not liberate themselves as long as they remained reluctant to take action against British colonialism. Instead of passively waiting for emancipation, Marx argued, the working classes of both England and Ireland had to take up the Irish cause as a central issue.

In the following years, Marx went on to study non-Western and pre-capitalist societies, efforts that are documented in his notebooks of 1879–82. In what is probably the book’s most original and important chapter, Anderson carefully examines these little-known notebooks, arguing for the later Marx’s nuanced, multilateral understanding of history. He marshals impressive evidence in this regard, uncovering the background to Marx’s famous admission—first in a letter to Vera Zasulich and later in the preface to the Russian edition of the Manifesto—that his analysis in Capital was “explicitly restricted to the countries of Western Europe.” Decades before the Bolshevik Revolution, Marx even recognized the possibility of a unique Russian path to socialism:

Thanks to the unique combination of circumstances in Russia, the rural commune, already established on a national scale, may gradually shake off its primitive characteristics and directly develop as an element of collective production on a national scale. Precisely because it is contemporaneous with capitalist production, the rural commune may appropriate for itself all the positive achievements and this without undergoing its frightful vicissitudes.4

Since Marx published little after the first volume of Capital appeared in 1867, it is often difficult to understand fully the theoretical depth of these later writings, which are often scattered and fragmentary. However, by tracing the intellectual and political themes in the late notebooks, Anderson demonstrates their vital importance for understanding Marx’s changing ideas toward non-Western socialist revolutions. After intensively studying Russian village communes and other non-Western and pre-capitalist societies, through works by Lewis Henry Morgan, Maksim Kovalevsky, and Robert Sewell, Marx came to recognize the “natural vitality” of existing pre-capitalist communes that could serve as a social basis for future revolutions.5 The contradictions of capitalism manifest themselves most clearly when the violent forces of economic development confront the natural vitality of other social formations outside capitalism. This is why the “margins” became so vital for the late Marx, as David Norman Smith also points out: “Now he needed to know concretely, in exact cultural detail, what capital could expect to confront in its global extension. So it should not be surprising that Marx chose to investigate non-Western societies at precisely this point. Euro-American capital was speeding into a world dense with cultural difference. To understand this difference, and the difference it makes for capital, Marx needed to know as much as possible about non-capitalist social structures.”6

Of course, Anderson rightly emphasizes that natural vitality alone is not a sufficient condition for revolution, which also requires “an outside subjective factor, a revolution on the part of the Western working classes” (235). Still, it is clear that Marx believed that “a Russian revolution could lead to a ‘communist development.’ Russia would not need to go through an independent capitalist development to reap the fruits of modern socialism, provided that its revolution became the spark for a working class uprising in the more democratic and technologically developed world.” This is a more radical and complicated image of socialist revolution than the rather unilinear view of history that Marx held in the 1850s. Anderson concludes that Marx would not restrict this theory to Russian village communes, but would apply similar logic to other colonized societies (236).

Anderson’s book received global recognition, and has been translated into Persian, Japanese, and French (Chinese and Indonesian translations are also in preparation). The expanded edition includes a new preface, in which Anderson offers a succinct summary of further excerpts from Marx’s late writings that will be published for the first time in MEGA IV/27. According to Anderson, Marx in the 1870s and ’80s was reading not only about the Russian and Indian communes, but also ancient Rome, through the works of classicists such as Karl Bücher, Ludwig Friedländer, Ludwig Lange, and Rudolf von Jhering, with particular attention to issues such as class, social status, and gender, from the city’s founding through the late empire. Even in these excerpts, Anderson argues, Marx did not simply trace a general, universal history, but was strongly interested in non-capitalist societies in the midst of “transition,” both in his own time and earlier, especially with regard to “a possible transition to capitalism” (xi). Marx studied various concrete historical cases with the aim of understanding whether the transformation of these earlier non-capitalist forms under the influence of the capitalist mode of production had resulted in strong resistance or in obedience to the dominant classes. Thus these late notebooks confirm and extend Anderson’s contention that the late Marx never sought to establish a universal law of history: “Most importantly, these late writings and notes on Russia, India, and ancient Rome show that Marx was interested in a deep and specific analysis of each society in its own right, rather than any general formulas applicable to all societies across the globe, regardless of sociohistorical specificity” (xi).

In addition to these archival discoveries, Anderson’s new preface also acknowledges his intellectual debt to his mentor, Raya Dunayevskaya, who first recognized the importance of Marx’s late notebooks in the 1980s.7 However, despite the extensive discussion by earlier Marxists going back to the 1970s—including in the pages of Monthly Review—of Marx’s changing views on imperialism and ecology from the 1860s on, Anderson still gives only limited attention to these prior contributions in the new edition of his book. In his later years, after moving away from an optimistic productivism, Marx’s research expanded to include not only pre-capitalist and non-Western societies, but also natural science.

Marx defined labor as a mediation of metabolic interchange between human beings and nature, and analyzed how different historical “forms” of labor have altered the entire social and natural metabolism.8 Marx’s theory of metabolism deals with the problem of “metabolic rift” in capitalism, inspired by Justus von Liebig, leading him to spend more and more time studying natural sciences after 1868. Further, Marx’s concept of metabolism addressed different ways of organizing the transhistorical metabolism between humanity and nature. He recognized that various systems of labor and property in non-European and pre-capitalist societies have employed distinct processes of metabolism between human beings and nature. In addition to the metabolic rift in Liebig’s sense, the disturbance of social and natural metabolism also occurred under the radical “transition” of traditional village communes after their confrontation with capitalism—the transition that is the focus of a significant section of Anderson’s book. Thus, Marx’s theory of metabolism could contribute to a still more comprehensive framework for understanding his late writings, but this connection has still to be examined more thoroughly in the future. Nevertheless, Anderson’s work will remain an invaluable point of reference in the ongoing reconstruction of Marx’s unfinished project of the critique of political economy.

View all posts by Kohei Saito →

The Science and Politics of DNA
The Internet and Monopoly Capitalism