Dear Reader, we make this and other articles available for free online to serve those unable to afford or access the print edition of Monthly Review. If you read the magazine online and can afford a print subscription, we hope you will consider purchasing one. Please visit the MR store for subscription options. Thank you very much. —Eds.
Notes from the Editors
by The Editors
(Nov 01, 2016)
Topics: Imperialism Political Economy War Places: Americas Europe Middle East Russia Syria Ukraine United States 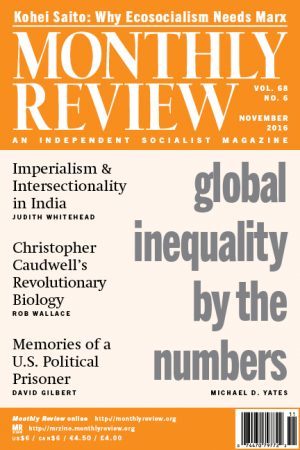 U.S. presidential elections, if nothing else, throw considerable light on the ideology and imperatives of the system. This is particularly the case with respect to imperialism, where one sees signs of a declining and increasingly desperate U.S. empire. Hillary Clinton has been calling for a no-fly zone in Syria (which would include Russian planes!), thereby threatening a confrontation with Russia on a level not seen since the Cuban Missile Crisis. Meanwhile, she has proposed sending arms to the Ukraine. Putin is, in her words, a “bully” and to be treated as such. She is on record as determined to “obliterate” Iran if it threatens Israel. On Iraq, she says that U.S. troops will “never again” be sent there to fight a ground war. Trump, for his part, while appearing to suggest a kind of détente with Russia, is ready to intervene directly and massively in Iraq against the Islamic State (ISIS, ISIL, Daesh), including the use of ground troops. He supports the extension of torture and the slaughter of whole families of suspected terrorists. He claims that he would raise Israel from being a second-level power (“Clinton vs. Trump: Where They Stand on Foreign Policy Issues,” Wall Street Journal, http://graphics.wsj.com, accessed September 26, 2016; “2 Big Problems with Hillary Clinton’s No-Ground-Troops Pledge,” Washington Post, September 8, 2016; Bruce Fein, “Hillary Clinton’s Appalling Enthusiasm for War,” Huffington Post, February 4, 2016).

In short, the presidential nominees for the two major political parties are each posturing over who is the most aggressive and bellicose upholder of U.S. militarism and imperialism—and in ways that threaten further escalation of war in the Middle East and in opposition to Russia. Of the two candidates, the Democratic candidate has been most inclined to propose military escalation against another superpower. Yet, the proposals of the Republican candidate are—except in this one important respect—hardly less warlike.

Behind the hawkish positions of the two presidential candidates are disputes over how best to wage the war in the Middle East, and whether this should coincide with a new “Cold” War with Russia—as control of the situation in the Middle East rapidly eludes U.S. grasp. The failure has to do with Washington’s recent inability fully to extend its “empire of chaos,” as Samir Amin first called it—see his Empire of Chaos (Monthly Review Press, 1992)—in Syria, as planned. In August 2012 the U.S. Defense Intelligence Agency (DIA) generated a national security report, declassified in May last year, that stated: “THE SALAFIST, THE MUSLIM BROTHERHOOD, AND AQI [Al Qaeda in Iraq] ARE THE MAJOR FORCES DRIVING THE INSURGENCY IN SYRIA” (capitalization in original). It continued: “IF THE SITUATION UNRAVELS THERE IS THE POSSIBILITY OF ESTABLISHING A DECLARED OR UNDECLARED SALAFIST PRINCIPALITY IN EASTERN SYRIA (HASAKA AND DER ZOR), AND THIS IS EXACTLY WHAT THE SUPPORTING POWERS TO THE OPPOSITION WANT, IN ORDER TO ISOLATE THE SYRIAN REGIME, WHICH IS CONSIDERED THE STRATEGIC DEPTH OF THE SHIA EXPANSION (IRAQ AND IRAN).” The “supporting powers to the opposition,” as indicated in the document, consist of the “WESTERN COUNTRIES, THE GULF STATES AND TURKEY” (declassified DIA Memo from 2012, available at http://judicialwatch.org; Pepe Escobar, “The U.S. Road Map to Balkanize Syria,” RT, September 22, 2016, http://rt.com).

The DIA document, which circulated in key U.S. national security circles, confirms that U.S. policy has been aimed at the dismemberment and balkanization of Syria, for which Iraq is the model. The DIA report also contemplated the possibility of the rise of what became ISIS, which it said could end up claiming a chunk of the dismembered Syria. Lt. General Michael Flynn, former head of the Defense Intelligence Agency and an adviser to Trump, argues that Washington stood by and made a “willful decision” to permit the emergence of the Islamic State (“An Ex-Intelligence Chief on ISIS Rise: It was ‘a Willful Washington Decision,'” RT, August 10, 2015).

In September 2015 Russia changed the equation by intervening militarily in Syria, bolstering the Assad regime, overturning the empire-of-chaos strategy of the United States and other supporters of a Salafist (fundamentalist Islamic) state. A negotiated ceasefire in the Syrian war, with the stated goal of allowing the Syrian government forces, Russia, and NATO to direct their attacks on the Islamic State, collapsed with the U.S.-led coalition’s bombing on September 17 of Syrian troops in Syria’s eastern province of Deir Ezzor. Washington declared the bombing “accidental,” an explanation Moscow has rejected. Deir Ezzor, mentioned in the DIA report as “DER ZOR,” was regarded as a crucial base for the establishment of a “Salafist Principality.”

Trump has seized on this disintegrating situation to accuse the Obama Administration of mismanaging the war on the Islamic State, while Clinton has countered by vowing to consolidate the U.S. position in the region by confronting Russia and imposing a no-fly zone in Syria—and “taking out” the Islamic State. Clinton has publicly stated that Obama’s strategy in the Middle East has been too weak—something that she promises to rectify (Jeffrey Goldberg, “Hillary Clinton: ‘Failure’ to Help Syrian Rebels Led to the Rise of ISIS,” The Atlantic, August 10, 2014).

As Samir Amin writes in his new book The Reawakening of the Arab World (Monthly Review Press, 2016, p. 14): “The strategy of contemporary imperialism for the region (the ‘great Middle East’) does not aim at all at establishing some form of democracy. It aims at destroying the countries and societies through the support of so-called Islamic regimes which guarantee the continuation of a ‘lumpen development.'” But this has made the United States and NATO into promoters of a political Islam, representing some of the most regressive movements in the region. Washington’s goal in Iraq, Amin writes, has been one of instigating “permanent civil war between Shiites and Sunnis, Arabs and Kurds.” This has meant that “US armies have protected those who subsequently had to take the direction of the Daesh (or ISIL), the Caliph himself!” (Amin, Reawakening, 79—he is referring to Abu Bakr al-Baghdadi, known as the Caliph of the Islamic State, whom the United States detained in Iraq in 2004 and released).

On September 8, the Washington Post reported that over Labor Day weekend (September 3–5), the United States dropped bombs or fired missiles on six different, largely Islamic countries: Afghanistan, Iraq, Libya, Somalia, Syria, and Yemen. In 2015 the United States officially dropped over 22,000 bombs, including drone strikes, on Iraq and Syria alone (“A Reminder of the Permanent Wars,” Washington Post, September 8, 2016; Micah Zenko, “How Many Bombs Did the United States Drop in 2015?” Council on Foreign Relations, January 7, 2016, http://blogs.cfr.org; Tom Engelhardt, “You Must Be Kidding: The Exasperating, Never-Ending Sprawl of American Empire,” In These Times, September 23, 2016).

To understand Russia’s role in this growing conflict, it is necessary to revisit the first articulation of the new imperial grand strategy by U.S. Undersecretary of Defense Paul Wolfowitz, following the 1991 Gulf War. In May of that year, Wolfowitz told General Wesley Clark: “We learned that we can intervene military in the [Middle East] region with impunity and the Soviets won’t do a thing to stop us…[W]e’ve got about five to ten years to take out these old Soviet ‘surrogate’ regimes—Iraq, Syria, and the rest—before the next superpower comes along to challenge us in the region” (General Wesley K. Clark, Don’t Wait for the Next War [New York: Public Affairs, 2014], 37-40). As MR editor John Bellamy Foster explained in Naked Imperialism (Monthly Review Press, 2006), it was the disappearance of the Soviet Union from the world stage that created the geopolitical power vacuum in the Middle East, as well as in Eastern Europe and Central Asia, which the United States immediately sought to exploit, while also striving to further weaken Russia. The fundamentalist, reactionary political-Islamic forces that emerged in Afghanistan were themselves clients of the United States in its surrogate war with the Soviet Union in Afghanistan, which contributed to the Soviet Union’s destabilization and demise. This became a breeding ground for terrorism and led to the 9/11 attacks. Nevertheless, U.S. grand strategy appears determined to continue using right-wing, fundamentalist, and terrorist forces as wrecking balls, a policy which has led directly to the rise of the Islamic State.

The U.S. strategy in the Middle East cannot be separated from its larger goal of permanently weakening Russia, which, even after the Soviet Union’s demise, is treated as a threat to a U.S.-dominated world order, especially as part of a potential Eurasian alliance of Russia, China, and Iran. This too has been captured by Samir Amin, who writes in his new book Russia and the Long Transition from Capitalism to Socialism (Monthly Review Press, 2016):

Perhaps Putin has now understood that the objective of the United States and its European allies is to destroy Russia and not to help it renew itself….Russia is searching for a place in the world system of today and tomorrow. It is now encircled by NATO forces….In response to the expansionist project of the United States and German Europe, Putin seems to have adopted the idea of building a vast alliance of peoples from the former USSR. The alliance is now known as “Euro-Asian.”…Moscow’s fight against the imperialist order in Ukraine and elsewhere, will be victorious only if the people involved resolutely support it. This support, in turn, will be possible only if Russia frees itself from neoliberalism, the origin of social disaster, in Russia as well as elsewhere (104, 127–28).

Corrections: In the October 2016 issue, on page 54, paragraph 2, line 5 of Kohei Saito, “Learning from Late Marx,” the words “in volume 4 of MEGA” should have read “in MEGA IV/27.” On the same page, paragraph 3, line 4, the sentence should have read: “However, despite the extensive discussion by earlier Marxists going back to the 1970s—including in the pages of Monthly Review—of Marx’s changing views on imperialism and ecology from the 1860s on, Anderson still gives only limited attention to these prior contributions in the new edition of his book.”