Dear Reader, we make this and other articles available for free online to serve those unable to afford or access the print edition of Monthly Review. If you read the magazine online and can afford a print subscription, we hope you will consider purchasing one. Please visit the MR store for subscription options. Thank you very much. —Eds.
Notes from the Editors
by The Editors
(Jan 01, 2017)
Topics: Biography Fascism History Philosophy Places: Americas Asia China United States 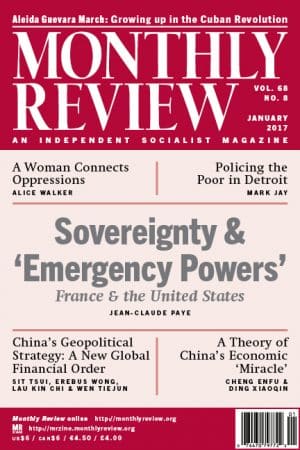 Shortly after the election of Donald Trump, the alt-right organization Turning Point USA introduced its notorious Professor Watchlist (http://professorwatchlist.org), listing some 200 radical academics in the universities as dangerous professors. Stories regarding this list were soon being carried in major papers throughout the country. In contrast to David Horowitz’s list of “the 101 most dangerous academics in America” a decade ago, the current Professor Watchlist has behind it the new sense of power on the extreme right provided by Trump’s electoral victory. Turning Point immediately announced the creation of Watchlist Chapters at universities across the country. These local Watchlist Chapters are top-down creations. All crucial decisions are made by Turning Point at the national level.

There can be no doubt that this is part of an attempted new McCarthyism. In terms of its overall orientation, the alt-right strategy here resembles the Gleichschaltung (“bringing into line”) in 1933–35 in Hitler’s Germany, where intimidation was directed at all the major cultural institutions, including universities, with the object of getting them to align with the new dominant views. Among those on Turning Point’s Professor Watchlist is MR editor John Bellamy Foster, a professor of sociology at the University of Oregon. Foster was on the earlier Horowitz list as well, and the comments with regard to him by the Professor Watchlist are lifted from Horowitz’s book The Professors. A number of other MR writers are also included on the Professor Watchlist, such as William Ayers, Zillah Eisenstein, and Richard Wolff.

The alt-right’s Professor Watchlist raises challenging issues about how this should be countered. In early December, Noëlle McAffee, a professor of philosophy at Emory University, set up a satirical professor watchlist as a liberal response to Turning Point. The satirical list was posted on a new blog called Watchlist Redux (http://professorwatchlist.blog). Inside Higher Ed carried a story by Coleen Flaherty on Watchlist Redux on December 6, entitled “Reclaiming the Watchlist.” In a widely distributed email statement on December 3, 2016, McAffee had explained the principles governing Watchlist Redux. The satirical list included past figures like Socrates and Jesus, as well as present-day figures, most of whom were not on Turning Point’s Professor Watchlist. McAffee declared in her December 3 statement: “If we were to list Marx, we’d need to tame him”—so Marx was not included among Watchlist Redux’s “radical” figures of the past. With respect to the listing of present-day figures, McAffee indicated that it was important to make those “who have been deemed dangerous,” like those that the alt-right had placed on its Professor Watchlist, “sound perfectly reasonable.” She went on to say: “The goal is to both reclaim the word ‘radical’ and to tame it.”

The McAffee statement was shared among the faculty in Foster’s department for purposes of discussion. The following is Foster’s response to his colleagues, which we present here, given the importance of the issues involved:

Thank you for sending this [McAffee’s December 3, 2016, statement] to the department and raising the issue for discussion. I hope I will not offend anyone if I say I personally and politically find the approach being adopted here to be extremely objectionable and something of a betrayal, though I perfectly realize this is not the intention of any of the people involved.

What does it mean to say, as McAffee does?: “If we were to list Marx we’d need to tame him somehow…. And for the list of those present, I think it works best to make those who have been deemed dangerous sound perfectly reasonable…. The goal is to reclaim the word ‘radical’ and to tame it.”

Reasonable by whose standards? Are we so timid that already we are talking about “taming” thinkers in the universities? Are we then abandoning our academic colleagues, trying to make them fit some acceptable line—some kind of tamed radicalism? What then happens to academic freedom? What is the purpose of the satire, then? Is it to defend those who do not need defending, or ideas that are somehow on the edge of acceptability, but still acceptable? Then in the second attack that will inevitably follow we will no doubt ratchet things back further. This is exactly what Gleichschaltung (the “bringing into line,” as the Nazis called it) is designed to accomplish. This is how it works. The intimidation is aimed at making us all seek to “sound reasonable,” and to “tame” (or cast aside) those who are not. To accede to this is akin to the vital center strategy in the McCarthy Era where various people tried to separate themselves from the radicals rather than directly opposing and denying any legitimacy to the inquisition. In my opinion, we cannot afford to play games at this point, we should not be talking about the intellectual/political positions individual professors take within the academy, as this is not the point here. The point is whether self-appointed conservative thought police are to be allowed to commence a witch hunt, targeting particular academics. We should definitely not engage in a satire where we deliberately make concessions by falsifying (taming) positions. The alt-right has already falsified the views of those it is attacking and this would just make it all the worse.

Karl Marx, it is true, is not on the Professor Watchlist, so we don’t have to “tame” him. But I am editor of Monthly Review and a Marxist. Should my views be tamed? There are other MR authors besides myself who are on the list, such as Bill Ayers, Zillah Eisenstein, and Richard Wolff. Past MR authors have included Albert Einstein, W. E. B. DuBois, Che Guevara, Bernadine Dohrn, Barbara Ehrenreich, Noam Chomsky, and Adrienne Rich. Should their ideas be tamed? Should we make them sound more “reasonable” within the ever-narrowing scope allowed by U.S. ideology (forgetting the rest of the world)? Or maybe some people are simply too dangerous to be mentioned even in a satire.

This is no joke. We are in a difficult political era. What makes this different than the Horowitz list is that there is real political power here and people are being targeted by figures connected to the incoming administration. There is a clear alt-right agenda which requires bringing the universities in line. We should turn the tables, and fight with courage and integrity. If we are going to stand with professors who are under attack, we have to defend their right to express their views. And that means attacking the witch hunt.

This issue includes two articles written by leading Chinese Marxists, exploring questions related to the Chinese economy and China’s position in the world: Cheng Enfu and Ding Xiaoqin on “A Theory of China’s ‘Miracle’,” and Sit Tsui, Erebus Wong, Lau Kin Chi, and Wen Tiejun on “One Belt, One Road.” We are running these pieces because they are interesting and important and otherwise unavailable in English; definitely not because we think they represent revealed truth. Even some of the best left expressions of today’s Chinese development strategy, such as the article by Cheng Enfu and Ding Xiaoqin, have seemingly as their main objective a Marxist-inspired, progressive national strategy of catching-up with the West through capitalist means in the context of globalization, while seeking at the same time to hold on to key aspects of the Chinese peoples’ revolution—an approach questioned by Samir Amin in “The Election of Donald Trump” (MRzine, November 30, 2016). What is crucial, as Amin points out, is: (1) the extent to which those promoting this catch-up strategy come to realize that such a goal is both impossible and irrational within the existing rules of the game, and (2) the degree to which they leave room for or envision “popular-sovereign projects.” Development through a regulated neoliberalism is contradictory and, in our view, can only lead to a dead end. To be sure, in the special circumstances of the early twenty-first century, it appeared to be a successful strategy. However, its limits are already becoming apparent. We are optimistic, though, that the Chinese Marxist interlocutors who have sought us out are realists and honest, and as reality demonstrates the impossibility of going forward with that project they will acknowledge the fact, and shall seek to promote an alternative path. Meanwhile, Sit Tsui and her colleagues, along with Cheng Enfu and Ding Xiaoqin, have much that is positive to teach to those who sympathize, as we do, with the historic struggles of the Chinese people.

The sad news of the death of Fidel Castro arrived just as this issue was being prepared, reminding us of the long connection between MR and the Cuban Revolution.

When Herbert Matthews of the New York Times “discovered” Fidel Castro and his guerrilla army in Cuba’s Sierra Maestra in 1957, the corporate media did what they usually do: they reduced Fidel to a kind of celebrity brand, to be defined not by what he and his movement actually did, but how he could best sell newspapers. So he became either the romantic guerrilla or the steely Communist tool of the Soviet Union right off the Florida coast. Except for occasional and censored reports by Matthews, most of the U.S. press read like treatments for a Hollywood western.

It is only a small exaggeration to suggest that, until Leo Huberman’s and Paul M. Sweezy’s “Cuba: Anatomy of a Revolution” appeared in MR in the summer of 1960, there had been no definitive examination of the roots, prospects, and especially the socialist character of the Cuban Revolution. Understanding that something historically significant was occurring, Huberman and Sweezy (and on one trip accompanied by Paul Baran) visited the island a number of times in 1960. They were often in the company of Fidel Castro (who sometimes even chauffeured them!). They saw the workings of an agrarian reform movement as it transmuted into social revolution. Their findings were published as a bestselling book, Cuba: Anatomy of a Revolution. (Subscribers can find it online in the MR archives.)

So began an enduring friendship and comradely collaboration between MR and the Cuban Revolution that has enlightened and energized this publication and its readers. Fidel and his compatriots transformed an age. We mourn his death and salute their achievements. It is, of course, impossible to predict the post-Castro course of Cuba. But one thing, at least, is certain: An important part of Fidel’s legacy is that for the first time since the 1898 Spanish-American War, the United States confronts its nearest Caribbean neighbor as an equal, no longer a colony.