Dear Reader, we make this and other articles available for free online to serve those unable to afford or access the print edition of Monthly Review. If you read the magazine online and can afford a print subscription, we hope you will consider purchasing one. Please visit the MR store for subscription options. Thank you very much. —Eds.
Notes from the Editors
by The Editors
(Apr 01, 2017)
Topics: Labor Political Economy Places: Americas United States 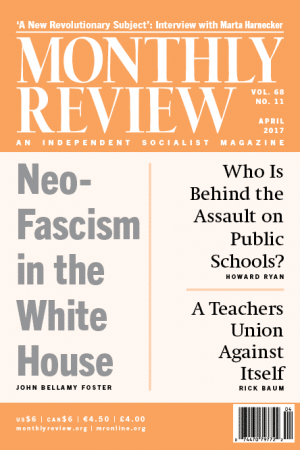 Much has been made of the support of white workers, including union members, for Donald Trump. But while Kim Moody (“Who Put Trump in the White House?“) and others have shown that the depth of this has been exaggerated, there is no doubt that it did exist. Both the Pennsylvania county in which Associate Editor Michael Yates grew up and the county in which he worked, each once solidly working class, heavily unionized, and mostly white, went overwhelmingly for Trump. And according to the local union president, 30 to 40 percent of the 600 workers at the Momentive chemical plant in Waterford, NY, recently engaged in a bitter strike and represented by the progressive and fiercely anti-Trump Communication Workers of America, chose Trump. Nationwide, according to an AFL-CIO exit poll, 37 percent of union members voted for Trump.

It is remarkable that those who labor for a living would vote for a billionaire who has never shown the slightest sympathy for them. He has never displayed concern for low pay, job safety, health, education, the environment, racism and sexism, or the plight of immigrants in the workforce. He infamously said that U.S. wages are too high! Since becoming president, Trump has nominated cabinet members hostile to the working class, from the abhorrent enemy of public education and public school teachers, Betsy DeVos, who is now Secretary of Education, to the racist, sexist wage thief, Andrew Puzder, Trump’s first nominee for Secretary of Labor. Mercifully, Puzder withdrew after a flurry of protests and revelations about his personal life and his violation of labor laws. But the new nominee, conservative lawyer Alexander Acosta, will offer little relief for employees, having served on George W. Bush’s pro-employer National Labor Relations Board (NLRB).

What is more, Trump will be joined in his war on workers by a reactionary Congress and numerous conservative state legislatures. As labor scholar Penny Lewis warns (“What’s Coming for Unions under President Trump?“), we can expect national right-to-work legislation (unions will have no right to collect dues equivalents from nonmembers); a ruling by the Supreme Court making all public-sector employment right-to-work; attacks on the job security of federal employees; weak enforcement of wage and hour laws; a push for school privatization, which weakens teachers’ unions; and an overturning of recent pro-worker decisions by the NLRB.

One would think that with such an anti-worker president, the U.S. labor movement would be primed to do all in its power to mobilize union members to resist, much as millions of people have protested Trump since the day he took office. But such has not been the case. The leaders of the country’s building trades unions met with Trump in the White House. These worthies were lavish in their praise for him, presumably keen on the possibility of new construction employment rebuilding the nation’s infrastructure, the Dakota Access Pipeline, and the wall along the border with Mexico. Perhaps they saw Trump as a kindred spirit, given that like them, he has had no qualms about being in bed with mobsters nor with organizations with long histories of racism and sexism. They practice a “me first, last, and always” business unionism just as Trump practices a similar kind of business. Solidarity is not in their vocabularies.

More troubling still was the meeting AFL-CIO president Richard Trumka had with Trump in New York City a week before his inauguration. Afterward, Trumka said that he and Trump had “a very honest and productive conversation.” This after the union chief had sharply and vigorously condemned Trump for his anti-unionism and much else. How is it that as millions were protesting a man very likely to be the worst president since James Buchanan, the country’s top union official was meeting with him? Shouldn’t he have been leading the protests? Trumka stooped even lower when more recently he lavished praise on Trump for the president’s first address before Congress.

In a perceptive essay for Truthout, Daniel Werst and Elizabeth Schulte argue that Trumka, like most U.S. union leaders, prefers “negotiations at the top” with minimum conflict and minimum democracy. And what they bargain for is “the terms of exploitation between employers and workers,” all the while keeping their own power and privileges intact (“What Was Trumka Doing in Trump Tower?” February 5, 2017). Trumka and those who think like him—that is, most major union leaders—will make any concession politically to maintain a seat at the table. All of which reflects decades of unions abdicating their principles, their duty to educate members, their responsibility to end all forms of discrimination, and their commitment to class struggle against their enemies.

Had unions done these things, neither Trump nor the liberal establishment, which long ago abandoned workers, could ever have been elected. We would not hear so many media commentators speaking and writing as if the working class was exclusively white and male. We would not see the foolish divide between class and identity politics. Solidarity would mean something, even in the building trades.

If there is to be any hope of building a labor movement worthy of the name, one that will lead the struggle against the neofascism that Trump is inaugurating and for a radical politics capable of someday creating a socialist United States, it is time to once and for all give up hope that the U.S. labor movement as presently constituted can be reformed. New forms of organization, radically democratic and egalitarian, must be built from the ground up. We will be writing about this in future issues and in the new MR Online. Stay tuned.

Readers looking for an account of class-conscious unions in action may wish to buy a copy of James Young’s Union Power, just published by Monthly Review Press.

The Review of the Month in this issue is a response to the rise of the Trump administration. Although the possible development of fascism in the United States and abroad has been a longstanding concern in the pages of MR, we have to confess that the actual developments with the election of the Trump administration, the rise of the alt-right, and the Gleichschaltung that has followed, caught us flat-footed, and the events of the last two months have forced us to reconsider the conditions that led, as Cornel West put it just after the election, to “the neoliberal era” ending in “a neofascist bang” (“Goodbye, American Neoliberalism. A New Era is Here,” Guardian, November 7, 2016).

In this respect, the recent book People Get Ready! (Nation Books, 2016) by former MR editor Robert W. McChesney and Nation Washington Correspondent John Nichols, stands out for having raised the alarm on the systematic danger of fascism in the United States. A strength of McChesney and Nichols’s argument was that it was not directly focused on the elections—Trump’s name does not even appear in their book—but rather on the structural conditions leading to the undermining of labor, work, and employment in the United States. Essentially, their argument was that secular stagnation, coupled with robotization, meant that not only the economic conditions of the 1930s were having a comeback, but inevitably the political conditions as well, including the threat of fascism—wherever the advance of the left was halted. A central point of their analysis was that the whole country was already in what Richard Falk (see the Review of the Month in this issue) has since called a “pre-fascist moment.” We highly recommend the McChesney and Nichols book for these and other reasons.

MR readers may also be interested in a 2006 discussion of fascism and its contemporary relevance in the United States by Gregory Meyerson and Michael Joseph Roberto, “It Could Happen Here,” on the Commentary section of the MR website.

As the Review of the Month in this issue argues, neofascism in the United States at present has no more than a beachhead in the government. It is our job to stop it before it spreads, and that requires a movement of tens of millions. The encouraging thing is that this was recognized almost everywhere at the grassroots from the start, and the people are now truly on the march. U.S. politics will never be the same.