Dear Reader, we make this and other articles available for free online to serve those unable to afford or access the print edition of Monthly Review. If you read the magazine online and can afford a print subscription, we hope you will consider purchasing one. Please visit the MR store for subscription options. Thank you very much. —Eds.
by Maxine Lowy
(May 01, 2017)
Topics: Culture Education Feminism Human Rights Inequality Philosophy Places: Americas Chile 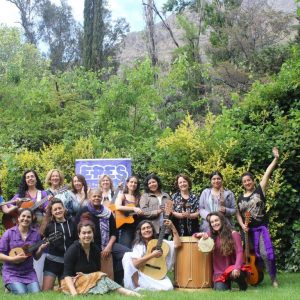 Maxine Lowy is a Santiago-based journalist and translator, and the author of Memoria latente (LOM Ediciones, 2016).

Elizabeth Vilma Uribe and her husband, Alan Velasquez, were known to their neighbors in Coronel, in the heart of Chile’s former coal mining region, as a “very nice, very friendly couple.” They were shocked on November 16, 2016, when Uribe, a schoolteacher and mother of two, was choked and stabbed to death by her husband of thirty years. The next day would have been her fifty-fifth birthday.

Under the country’s military dictatorship (1973–1990), thousands of political prisoners, but especially women, were subjected to sexual violence and torture. In today’s Chile, the murder of women by a spouse or boyfriend has become so common that the press routinely categorizes such killings as “femicide.”1 Elizabeth Uribe’s death was the fiftieth femicide in Chile in 2016. 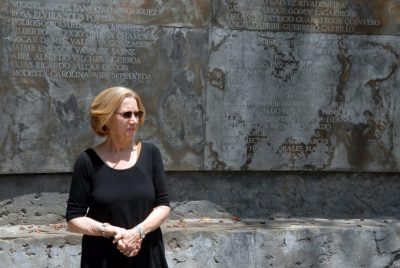 As the news of her untimely, vicious death resounded in the Chilean media, three hundred kilometers to the north, a group of a dozen women came together at an idyllic setting in the Cajon del Maipu canyon, near the capital city of Santiago. Along with their bags, several carried guitars and percussion instruments into a sprawling two-story wooden house, the Tremonhue Spirituality and Integral Health Center, in the shadow of the gritty mountains towering above the river. The twelve women were songwriters and musicians convened by the iconic singer, feminist, and peace activist Holly Near, in collaboration with the Popular Education for Health foundation (EPES) of Santiago, for a weekend workshop to channel the power of song against violence to women.

For more than forty years, Near’s music has decried violence in armed conflicts around the globe. Her voice has also rallied thousands against sexual assault during the Take Back the Night campaigns that began in the 1970s and resumed with force in the early 2000s. Near’s song “Hay una mujer desaparecida” (There’s a woman missing) helped ignite international condemnation of the dictatorship’s forced disappearances and systematic human rights violations.

EPES was founded in 1982, at the height of the Pinochet dictatorship, to help working-class women organize for better living conditions and health care. In its more than thirty years, EPES has developed innovative participatory programs that have helped shape public health policy on issues such as HIV/AIDS prevention and violence against women, framing these as both public health and human rights concerns. Art, in the form of murals and music, is a vital element of EPES’s popular education strategy.

Near and EPES have been partners more than a decade. EPES organized Near’s first visit to Chile, and the singer has taken part in fundraising events in the United States to help support the organization’s work. The latest fruit of their creative collaboration, last year’s workshop invited participants to think of themselves as feminist artists, and promised to create an intimate space conducive to musical composition. Claudia Stern, a longtime songwriting instructor with two original albums to her name, imagined the workshop would address technical aspects of composition. What she discovered over the weekend was instead “a completely different way of approaching musical composition.”

Thematic considerations—a sobering EPES presentation about violence against women and Near’s reflections on effective political uses of song—were the workshop’s major focus. Near likened the songwriting process to the movement of a camera, with a close-up and then a long shot: “One can start with the personal and pull back to the global, or have a long shot and then zoom in to the personal,” she advised. “Either way, it gives depth to the story.”

But the Tremonhue retreat center was also electric with emotion from sharing personal stories and experiences, and, of course, singing. Deep bonds were forged among participants, few of whom knew each other prior to the workshop. Moreover, the invitation was to compose women-identified songs in a setting that alternated between individual and group composition. With the sounds of nature and majestic scenery as inspiration, the musicians went off alone under a tree, facing the mountains, or along the house’s shady veranda to write their own songs, then came back together to sing their new compositions.

For Stern, who describes her music as “very intimate, speaking from deep inside me,” Near’s approach to song was difficult at first: it was “less metaphorical” than her own, “with a more concrete message…intended to be easily sung by people at a rally.” Stern had previously avoided politically charged lyrics, but now she sees a need to channel her music against violence toward women. The challenge now will be to convey a direct, forceful message without compromising her personal style and vision.

In contrast, music as a tool for social change has long been part of the repertoire of Evelyn Gonzalez, a songwriter and playwright who frequently writes in the Mapudungun language of her indigenous Mapuche ancestors. Gonzalez, a psychologist at a municipal women’s advocacy center, believes the workshop was “a seed that will foster a new creative alliance that will flourish to prevent violence to all women.”

Another participant, Vasti Michel, who lives in the heart of rural Mapuche territory, has been acutely aware of marginalization and discrimination since she was a child. “From this kind of invisiblized violence, normalized over centuries, arise my creations as a tool of liberation and personal healing.” She speaks of the workshop as having strengthened her vision of “a universe of women musicians…who help build a more dignified, fair and loving society for all.”

The continuing prevalence of violence toward women suggests it is deeply—though not necessarily permanently—ingrained in Chilean society. Karen Anderson, the founder of EPES and director of its International Training Program, says the workshop was motivated by the conviction that music has the power to bring about a rift in cultural practices. She and Near believe one product of the workshop in particular may have that potential: a collectively composed song entitled “Nunca más mujer” (Never again, woman).

Claudia Stern and singer Cecilia Concha Laborde voluntarily co-produced “Nunca más mujer,” a song with a captivating melody and simple, direct lyrics. After recording the music track, in late March the workshop participants reunited at the recording studio to add the vocals. The song’s release, planned for April, will be accompanied by a nationwide promotional campaign.

“I believe that music will always be a guiding force for social change,” affirms Near. “When I stand in the wings of a theater before singing, my mantra to myself is: I am here to heal, educate, inspire, challenge and entertain.” Anderson imagines “Nunca más mujer” being sung in marches and events where little boys and girls sing together with their parents, learning through song that it is never acceptable for men to hit women, or vice versa.

Maybe Elizabeth Uribe’s children, coming to grips with the brutality that tore their family apart, will also hear the song, and begin to feel that it is possible to rebuild their lives free of violence.

You can read more about the women songwriting workshop at the Popular Education for Health foundation (EPES) website. The following is a video that was made about the event (also available at the EPES website).

View all posts by Maxine Lowy →