Dear Reader, we make this and other articles available for free online to serve those unable to afford or access the print edition of Monthly Review. If you read the magazine online and can afford a print subscription, we hope you will consider purchasing one. Please visit the MR store for subscription options. Thank you very much. —Eds.
Notes from the Editors
by The Editors
(May 01, 2017)
Topics: Democracy Ecology Inequality Movements Political Economy Race Places: Americas United States 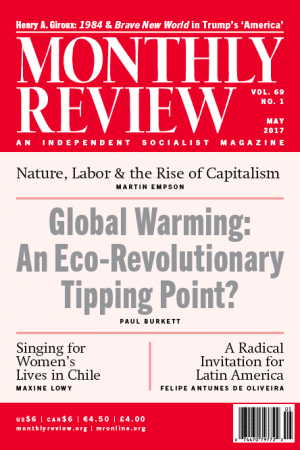 The Review of the Month in the April 2017 issue of MR, “Neofascism in the White House,” by John Bellamy Foster, pointed out that the Trump administration has been exceedingly slow to fill the more than 500 political positions in the executive branch that need Senate confirmation. That article attributed this failure to the chaos of the new administration’s early days, and to the struggle to find appointees “loyal” to its larger project, including the “deconstruction of the administrative state,” as White House chief strategist Steve Bannon put it. However, at the end of February, Trump offered another partial explanation, claiming that he was allowing the seats to remain empty because “many of those jobs, I don’t want to fill.” Subsequently, critics have taken a much closer look at Trump’s “beachhead” transition teams, consisting of more than 400 interim placements whereby those hired are allowed to work for up to eight months without Senate confirmation (“Trump’s New Personnel Plan: Leave Parts of His Administration Empty,” MSNBC, February 28, 2017).

As journalist Matt Taibbi writes in Rolling Stone (April 6, 2017), “a darker explanation” has emerged in various sources suggesting “that Trump sent waves of nonpolitical appointees to the agencies in so-called beachhead teams, i.e., people sent in groups under temporary appointments of four to eight months. These appointees did not have to be confirmed by Congress…. A fair number carry amorphous ‘special assistant’ titles, making it difficult to know what their duties are.” Indeed, all the indications are that the normally very temporary positions are being maintained as long as possible—thus constituting part of a larger effort to bring the government in line, while circumventing the separation of powers.

What is particularly revealing, adding to these growing suspicions, is the extraordinary nature of these “beachhead” appointments. Dozens of them are well-known lobbyists, contradicting Trump’s promise to “drain the swamp.” Eight are Heritage Foundation staffers. One “special assistant” just graduated from high school. Others are political appointees from the alt-right and Breitbart. Many are little more than names, with no known profile or qualifications. The Trump administration, departing from precedent, has refused to offer such information when questioned—or even to deny or confirm their existence as individuals (“Meet the Hundreds of Officials Trump Has Installed Across the Government,” ProPublica, March 8, 2017; “Mystery Trump Workers Hold DOE, Interior Jobs,” Greenwire, March 30, 2017).

One key member of the Breitbart contingent in the beachhead transition team is Curtis Ellis, appointed as special assistant to the secretary of labor. Ellis was executive director of the American Jobs Alliance, a right-wing nationalist group which opposed the Trans-Pacific Partnership (TPP). He also was a columnist for the WorldNetDaily, notorious for pushing the “birther” lie that Obama was born outside the United States. Ellis first emerged as a major alt-right ideologue with his May 2016 article “The Radical Left’s Ethnic Cleansing of America,” in which he argued that the goal of the left was to kill off white working-class families. In his own words:

The New Left sneered at white, blue-collar men as racists and the labor unions that represented them as bastions of white privilege that must be destroyed. After all, it was AFL-CIO construction workers who beat up antiwar protestors in the Hard Hat Riot of 1970, while working-class voters were George Wallace’s base in his bid for the presidency…. The party cadres set out to build their brave new world and eliminate their class enemies—read: white working people. It is in this context that we understand why Clinton and company push so-called “free trade” deals like NAFTA and Obamatrade, corporatist schemes that move America’s manufacturing assets—and jobs—to Mexico, China and elsewhere. If you believe, as do the leftists, that America has more than it deserves and Americans are racists, the global redistribution of our wealth and the death (literally) of white working people is a desired outcome, a feature not a bug.

Race warriors, displaying group solidarity or guilt, were pleased to see the jobs of white Americans moving to the Third World…. For 30 pieces of silver, they delivered working Americans to the slaughter. And so, dear readers, that is how the death of American working-class whites was planned by the radical left and carried out with willing executioners at the highest levels of American politics, academia and business. (Curtis Ellis, “The Radical Left’s Ethnic Cleansing of America,” WorldNetDaily, May 20, 2016; “Trump Advisor: Hillary and Obama Want ‘Ethnic Cleansing’ of ‘White Working People,’” Mediaite, August 22, 2016.)

Bannon, then running Breitbart, conducted a sympathetic interview with Ellis only a few days after this piece appeared. There Ellis stated: “The decimation of America’s middle class and industrial strength is a case of murder, not accidental death. It was done with premeditation, malice, and forethought…. The story begins in the 1960s with the rise of the ‘youth culture’ and the New Left, student activists who were smoking dope, taking over college buildings, and sporting Che Guevara T-shirts and Viet Cong flags while protesting the Vietnam War” (“Curtis Ellis Discusses ‘The Radical Left’s Ethnic Cleansing of America,’” Breitbart, May 24, 2016). In another interview with Bannon in August 2016 on the Trans Pacific Partnership, Ellis promoted the clearly neofascist view—twisting arguments that originated on the left—that “crony capitalists” were working with “the communist dictators of Vietnam” and selling out ordinary Americans by relying on “slave labor” abroad. Promoting Trump’s push for “Americanism, not globalism,” he declared, “they [the left] can’t stand that. My gosh, that’s cyanide to them” (“Curtis Ellis: TPP Is About ‘Redistributing the Wealth of America to the Rest of the World,’” Breitbart, August 10, 2016).

Jon Perdue, another key member of the “beachhead transition team,” is the author of the 2012 book The War of All the People: The Nexus of Latin American Radicalism and Middle Eastern Terrorism, which argued that Hugo Chávez of Venezuela and Mahmoud Ahmadinejad of Iran were working together to spearhead a “war of all the people” against the United States to combat its imperial hegemony. Perdue is a Breitbart contributor, who has sought to justify the 1973 U.S.-supported military coup against President Salvador Allende in Chile, as a basis from which to contest all left criticism of U.S.-aided coups and repression in Latin America (Jon Perdue, “Chavez’s Alliance with Iran—And How to Stop Him,” Breitbart, July 8, 2010).

The fact that alt-right figures like Ellis and Perdue are playing key roles in the Trump administration, while circumventing the Senate confirmation process, is an ominous indication of the wider effort by the administration to construct a new political order, further concentrating power in the White House and bringing the rest of the state into line.

In This Changes Everything: Capitalism vs. the Climate, Naomi Klein famously introduced the argument that “the right is right”—in its perception of the threat that climate change mitigation poses to capitalism. Faced with a choice between capitalism and the climate, the right, true to its class allegiances, chose the former. It then had to justify this to its base by attacking climate science.

A corollary of the right’s stance on climate change was that it was willing to at least partially acknowledge the validity of climate change science in the case of solar geoengineering (today euphemistically called “albedo modification”); since this meant addressing the climate problem by hacking the planet—putting sulfur particles into the atmosphere to shield the earth from the effects of solar radiation—while allowing business as usual to continue unimpeded.

All of this is playing out today in the Trump administration. Trump packed his cabinet with climate-change deniers. He has issued an executive order demolishing Obama’s Clean Power Plan, as too expensive. Nevertheless, all the indications are that the new administration is ready to back geoengineering schemes to address climate change. Thus Trump adviser David Schnare, general counsel for the Energy and Environment Legal Institute (formerly the American Tradition Institute), who has pushed legal cases against leading climate scientists, making him one of the nation’s most active climate denialists, is nonetheless a strong proponent of federal support for solar geoengineering. Rex Tillerson, former CEO of ExxonMobil now secretary of state, has similar views; as does Trump supporter Newt Gingrich, who says this is the way to kill “the green pig” of environmentalism. According to a report in the Guardian in March, the Trump administration seems quietly disposed to “open the doors” to solar engineering experiments, such as those being developed by a group of scientists at Harvard, who expect to be able to carry out tests next year (“Trump Presidency ‘Opens Door’ to Planet-Hacking Geoengineering Experiments,” Guardian, March 27, 2017).

Setting aside the issue that many climate scientists believe that albedo modification may be more dangerous that climate change itself, there is the question of the grand hypocrisy involved here. Unwilling to admit to the reality of climate change, which the climate-change-denier-in-chief has called a “hoax,” the Trump administration nonetheless seems ready to consider hacking the planet to “shield” the world from climate change—as long as this means that capitalist business as usual can continue.

We note the deaths of two longtime friends and supporters of MR. Lewis “Bud” Rowland, who died on March 16 at age ninety-one, became national president of the Association of Interns and Medical Students (AIMS) while in medical school in the 1940s. Under his leadership, AIMS advocated universal health insurance, equal medical care for rich and poor, and more admissions of minorities to medical school. The group was suspected of Communist leanings, and its members suffered the persecutions of McCarthy-era witch hunts. Bud went on to a distinguished career as a scientist, author, and mentor, and served for many years as chairman of the neurology department at Columbia University. According to the New York Times, March 23, 2017: “Dr. Rowland was a prolific researcher and writer, with nearly 500 published scientific articles that focused on devastating neuromuscular diseases, including muscular dystrophy, myasthenia gravis and many rare syndromes.”

Peter Kwong, who died on March 17 at age seventy-five, was the author of the 1979 Monthly Review Press book Chinatown, New York: Labor and Politics, 1930–1950. Though trained as an engineer, he became involved in social issues, which led to a lifetime of scholarly work on the history of Chinese immigration to the United States, from the mid-nineteenth century to the present. Described by the Times (March 23, 2017) as “an authoritative scholar on America’s Chinatowns and Chinese immigration,” he explored the lasting forms of labor exploitation and resistance associated with the development of Chinatowns as segregated but vibrant urban communities.

An Eco-Revolutionary Tipping Point?
A Progressive City Fights Back