Dear Reader, we make this and other articles available for free online to serve those unable to afford or access the print edition of Monthly Review. If you read the magazine online and can afford a print subscription, we hope you will consider purchasing one. Please visit the MR store for subscription options. Thank you very much. —Eds.
Review
by Daniel M. Berman
(Jun 01, 2017)
Topics: Ecology Movements Strategy Places: Americas United States 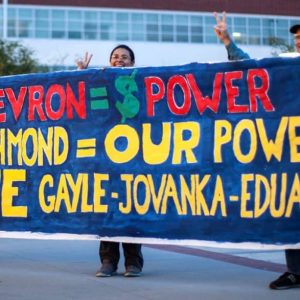 Steve Early’s new book Refinery Town tells the story of how a coalition of progressives transformed Richmond, California into the largest city in the United States governed by a Green Party mayor. But Richmond is not just Anytown; its economy and government has been dominated for a century by a giant Chevron refinery that processes 250,000 barrels of oil a day, billions of dollars’ worth of gasoline and other petroleum products every year.

Working-class and more than two-thirds black and Latino, Richmond does not fit the stereotype of a city where the Greens would be expected to thrive. But since its first electoral success in 2005, the Richmond Progressive Association (RPA) embarrassed Chevron’s political machine so decisively in the 2014 election—despite the company’s more than $3 million campaign spending—that the oil giant has apparently retreated from blatant efforts to control city politics, at least in the immediate future. In the November 2016 city election, the progressives smashed the old guard by a stunning 5–2 margin.

Many of the harshest realities of contemporary urban life have played out in Richmond: lack of jobs, high murder rates, racial discrimination, battles over aggressive policing directed at racial minorities, polluted air, and nagging fears that the oil refinery could catch fire and explode at any time. Deindustrialization has exacerbated the employment crisis, which Chevron has done little to alleviate, because few Chevron workers actually live in Richmond.1 Joblessness helped fuel a major crack epidemic in the early 1980s, and clashes between rival drug gangs drove annual murder totals from about a dozen in the 1960s to a high of 62 by 1991. The Richmond Police Department (RPD) had traditionally dealt with these problems by acting as a kind of commando occupation force in poor, largely nonwhite neighborhoods. The movement to demilitarize the police is perhaps the issue which has most captured people’s attention in Richmond and around the country. The campaign to convert the RPD from an occupying force into a community-oriented ally occurred under the improbable leadership of Chris Magnus, the former police chief of Fargo, North Dakota.2

Richmond’s transformation into a multiracial city began during the Second World War, when Henry Kaiser founded the four Kaiser Shipyards there—the first mass-production shipbuilding operations in the world. Kaiser quickly dwarfed the refinery itself. Faced with acute labor shortages, the company recruited tens of thousands of workers from states like Oklahoma, Texas, Louisiana, and Mississippi, who were eager to take well-paying union jobs in the city’s war industries. Many were blacks eager to escape sharecropping and racist terror in the South. Their presence effectively integrated the workforce, especially at Kaiser, and the wartime influx of workers quadrupled Richmond’s population, to 135,000. Henry Kaiser even built a hospital to serve the mass of new arrivals.

Richmond’s white population initially sought to harass and exclude African American workers and their families by any means possible—but the city’s new black residents refused to take it lying down. Even the Standard Oil refinery, which had employed only nine black workers out of 3,000 when the war began, had hired over a hundred by the war’s end, along with several hundred women.

African Americans working at Kaiser Shipbuilding were allowed to join the International Brotherhood of Boilermakers as full dues-paying members, but were initially banned from filing grievances. In protest, they founded the Shipyard Workers Against Discrimination, whose leaders in turn went on to found a famously activist chapter of the NAACP.

Once the war ended, many in Richmond’s established white “core community” assumed that black residents would “go back to where they came from,” but most chose to stay. To drive them out, the Richmond Housing Authority tore down buildings where tens of thousands of blacks had resided, despite protests by the inhabitants. Efforts by war veteran Wilbur Gary and his family to move into an all-white neighborhood met with determined resistance from white mobs hurling bricks and planting Klan-style crosses. After multiracial group of activists from the Civil Rights Congress traveled from around the Bay to shield Gary’s family from harm, they finally moved in, and some of their new neighbors even extended them a kind welcome.

Decades later, however, racial antagonisms continued to roil the city. During a Cinco de Mayo celebration in 2002, Andrés Soto, his two sons, and dozens of other Latinos were beaten by police and jailed. Soto, charged with resisting arrest and assaulting a police officer, responded by organizing local Latinos to protest the unjustified arrests, an increasingly common experience among the city’s growing Latino community. A police investigation later found that excessive force had been used. All charges were dropped, and Soto won a $270,000 settlement. A leading activist and an eloquent speaker in both English and Spanish, Soto would go on to become one of the key organizers of the Richmond Progressive Alliance.

For years, Darrell Reese, a white Richmond fire captain who lived in a suburb outside the city, ran the local political machine on behalf of Chevron. His ostensible program was “to save the Black seats on the City Council,” and Chevron kept the money flowing to his favored candidates, so long as they resisted potentially costly demands on the refinery and kept the wage increases flowing to police and fire fighters. When Isaiah Turner, the last old-guard city manager, was edged out in 2003, it was discovered that Richmond had a $35 million budget deficit, forcing layoffs of 200 workers and the closing of libraries, parks, and firehouses.

The concatenation of “cronyism, corruption, and incompetence” spurred the creation of a cross-class, multi-ethnic reform movement. The founder of what would became the Richmond Progressive Alliance was Juan Reardon, an immigrant from Argentina forced into exile for his opposition to the country’s military dictatorship. He had emigrated to the United States in the 1980s, earning graduate degrees in epidemiology and biostatistics. His research on the city’s drug-related AIDs epidemic—caused by infected needles—triggered his initial interest in Richmond politics. Reardon helped create the Richmond/El Cerrito Day Laborers Association, whose protests led to an agreement with the Richmond Police Department to stop arresting Latino day laborers for vagrancy when they assembled on public property to seek jobs.

The budding Richmond Progressive Alliance (RPA) soon decided that to achieve their larger goals, they had to run their own candidates. In 2004 Andrés Soto, who focused on police reform, and Chicago native Gayle McLaughlin both decided to run for city council. McLaughlin had experience campaigning against U.S. wars in Central America and with PUSH, the social justice organization founded by Jesse Jackson. Running under the slogan “Another Richmond is possible,” McLaughlin won a council seat, but Soto lost after police and firefighters unions painted him as a “dangerous radical” for calling them “attack dogs for corporate power.” In 2005, the council hired Bill Lindsay for city manager away from an upscale suburb, and he proved to be a competent financial caretaker, often saying, “If you don’t want horrible press, do good work.” As local administration improved, Richmond began to shed its reputation for corruption and dysfunction. McLaughlin also initiated a successful campaign to require Chevron for the first time to curb toxic emissions, and to file permits and pay fees for its construction projects, like any other builder.

Nevertheless, on August 6, 2012, the refinery burst into flames, sending nineteen workers—one with serious burns—running for their lives, and frightening thousands of residents, some of whom checked into emergency rooms with respiratory complaints. The RPA’s dire warnings seemed to have been decisively confirmed. The final report on the incident by the U.S. Chemical Safety Board corroborated almost everything the reformers had asserted about Chevron’s “cowboy” attitude toward safety.3 In the wake of the disaster, Chevron signed an Environmental and Community Investment Agreement obliging the company to contribute $90 million to upgrade certain carbon steel pipes and air monitors whose failure had contributed to the explosion, and to spend $30 million to support college-bound Richmond high school seniors. In addition, the new city government won a $7.6 million increase in Chevron’s annual taxes for the next fifteen years.

A few years later, Gayle McLaughlin ran for mayor and won, this time bringing with her a working majority. Perhaps the most celebrated action of Richmond’s new governing group was to hire Chris Magnus away from Fargo, North Dakota, to serve as its new police chief. At first glance, Magnus looked like an odd choice: majority-nonwhite Richmond was then experiencing more than twenty times as many murders per year as Fargo, one of the whitest cities in America, and Magnus was openly gay. On arrival, he moved quickly to reform the culture and policies of the RPD. He disbanded groups of cops who had became known in minority neighborhoods as “the jump-out boys,” because they liked to pop out of unmarked cars toting submachine guns.

Instead, Chief Magnus talked about community policing and increasing the number of cops who walked regular foot patrols—and he even walked them himself from time to time, to get the feel of the city. He also stopped the harassment of political protesters and pointedly stated, “I think it’s really important [to give] very clear direction and supervision: if someone behaves badly toward you, you just smile, and you don’t need to respond or take it personally. A successful event is not one where you’ve had to get into a fight with somebody. It’s actually one where everybody leaves, there are no arrests and no injuries, and everyone feels they have been treated with respect.” And unlike most RPD officers who lived outside of Richmond, Magnus bought a house in Richmond proper, from which he would often bicycle to work, hear the occasional shots and police sirens, and be accessible to the residents of the neighborhood association who had concerns about the police and crimes to report.

Under Magnus, the city initiated a program that spent $1.1 million per year to hire a half-dozen full-time youth mentors with past prison or gang experience as “neighborhood change agents,” helping to identify candidates for Peacemaker Fellowships that “pay kids to stay alive.” From 2006 through 2015, the annual number of murders fell from forty-two to twenty-one, and for seven years, beginning in 2008, no one was killed by Richmond police. (In nearby Vallejo, another majority-minority city only slightly larger than Richmond, six residents were killed by police in 2012 alone.)4

The police reforms in Richmond have attracted attention from citizens and police reformers around the country. Even if Early had focused only on Richmond’s success in taming the police and freeing the city from Chevron, Refinery Town would deserve a careful read, but the book’s other stories show how much a progressive city can accomplish.

Of course, major problems persist. Corruption still surfaces in city government, as the city’s targeting of whistle-blower Stacie Plummer seemed to show, and some residents complain that the city’s air pollution alert systems often misfire.5 Certainly no one would claim Richmond has “solved” the problems of unemployment or gentrification, though a start has been made with a recent rent control ordinance.6 (Rent increases forced Andrés Soto himself to move to Benicia, where he went on to help organize a ban on dangerous oil deliveries by rail to its Valero refinery.)

Today it is not San Francisco, Berkeley, Oakland, Palo Alto, or San José, but Richmond that is the most politically fascinating city in the Bay Area, and perhaps the country. Its recent history proudly exemplifies Frederick Douglass’s famous dictum: “If there is no struggle, there is no progress.”7 Life in Richmond is no nirvana, but it is far more humane than it used to be.