Dear Reader, we make this and other articles available for free online to serve those unable to afford or access the print edition of Monthly Review. If you read the magazine online and can afford a print subscription, we hope you will consider purchasing one. Please visit the MR store for subscription options. Thank you very much. —Eds.
Review
by Rebecca Clausen and John Bellamy Foster
(Sep 01, 2017)
Topics: Ecology Places: Americas United States 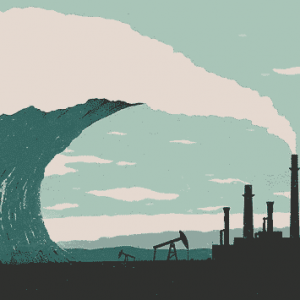 Rebecca Clausen is a professor of sociology at Fort Lewis College, and coauthor, with Stefano B. Longo and Brett Clark, of The Tragedy of the Commodity: Oceans, Fisheries, and Aquaculture (Rutgers, 2016). John Bellamy Foster is the editor of Monthly Review.
Del Weston, The Political Economy of Global Warming: The Terminal Crisis (New York: Routledge, 2014), 230 pages, paperback, $53.95.

Although the Australian scholar Del Weston died shortly after finishing The Political Economy of Global Warming, her authentic voice and intellectual courage shine through in the book’s opening pages: “I am writing this book,” she begins, “in the belief that it is not too late, that we still have a small window of opportunity to change the current course of human history, and that we have a moral imperative, given the potential scale of suffering, to act” (3). She retains this strong sense of conviction throughout the impressive analysis that follows, reflecting her remarkable ability to combine political-economic and ecological inquiry with a vision of a future society based on equality and justice. She insists on the need to understand climate change not as an isolated environmental issue, but rather as the product of interrelated problems and crises arising from the capitalist economic system.

Weston notes that “it has become contentious to acknowledge that we live in a capitalist system, as if society has been whitewashed and depoliticized and ‘just is'” (9). Against this depoliticizing trend, she takes the system head on, with a confidence based on a firm foundation in Marxian theory and a sound understanding of scientific sources. This insightful book should be considered alongside recent works such as Naomi Klein’s This Changes Everything, Ian Angus’s Facing the Anthropocene, and Andreas Malm’s Fossil Capital, all of which recognize climate change as a historical and material symptom of a political-economic system in crisis.1 Weston breaks new ground, however, by extending Marx’s theory of “metabolic rift,” making novel connections between social and ecological alienation. Furthermore, she applies these frameworks to study concrete conditions in South Africa, and outlines a possible path toward “metabolic restoration”—a closing of capitalism’s rift between society and nature.

The first part of the book surveys both the contemporary global political economy and the latest science on global warming. The second part analyzes the political situation and social movements in South Africa, where Weston lived and studied from 2008 to 2010, and the last section maps out a new direction for the global struggle for ecological justice.

Weston’s analysis gains much of its power from her brilliant use of the concept of metabolic rift. “In a general sense,” she writes,

the metabolic rift refers to a disruption between social and natural systems, leading to ecological crisis. In Marxist ecological theory, humans exist in a “metabolic” relation with nature that is fundamental for survival….The metabolic rift thus refers to a rupture in the metabolism of the whole system, including humans’ part in that system. The concept is built around how the logic of accumulation severs basic processes of natural reproduction, leading to the deterioration of the environment and ecological sustainability and disrupting the basic operations of nature. It neatly captures the lack of balance between “expenditure and income” in the Earth’s metabolism under the capitalist system. (65–66)

However, it is in relating the metabolic rift to human alienation that Weston develops some of her most original insights. Here she writes:

The human-social relationship to nature is central to the metabolic rift and it is at this very point that alienated labour mediates the relationship within the capitalist relations of production. [Istvan] Mészáros’s Marx’s Theory of Alienation (1970) describes the double alienation of humans in the complex relationship between humanity, labour, and nature. Marx, and Hegel before him, treated human labour as fundamental…[seeing] the particular labouring relationship of humans under the capitalist system as the basis of class relations and the source of alienation of humans from one another (as alienated labour) and from nature. (74)

As Weston lucidly shows, only by overcoming the alienation of labor can we begin to heal the metabolic rift. She describes multiple levels of human alienation, rooted in the social relations of production and extending through technology, culture, and schooling, demonstrating convincingly that “human alienation on all levels has a synergistic effect on humans’ ability to tackle issues such as global warming and other ecological problems” (76). Weston rightly points to the domination of people’s social and ecological relationships by the logic of capitalist markets as the foremost obstacle to any project of metabolic restoration (77).

The frank realism of Weston’s account of things as they are is matched by her radical enthusiasm for what might be. Her work warns against turning away or inward in the face of the Anthropocene crisis, instead exhorting readers to take action. “The world is in desperate need of utopian and radical visions,” she writes, “without which there is little chance of redirecting the current course of human history” (181). Unlike many other works on the subject, which give at best a cursory glance toward a better future, The Political Economy of Global Warming devotes three full chapters to this. She articulates seven principles that, in her view, would undergird a just, ecologically sustainable society: (1) Metabolic Restoration, (2) Restoration of the Commons, (3) Food Security, (4) Community of Producers, (5) No-Growth Economies, (6) Equity, Ecological Justice, and Redistribution, and (7) Real Participatory Democracy (170–80).

Each of these proposals aims to address a profound structural problem of capitalism. She writes:

The Marxist concepts of metabolic rift and metabolic restoration are my starting points for establishing the principles for future social organization…. [The] principle of metabolic restoration is founded on a need for humans, in producing their livelihoods, to re-establish their relationships to the land and biosphere, to care for, to rebuild and restore the health of the land to allow it to sustain them, and to help restore the health of the biosphere. (170–71)

Weston envisions a future “community of producers” (comparable to Marx’s “associated producers”) organized around the task of metabolic restoration, under conditions of ecological and social justice rooted in substantive democracy. A vital part of this transformation is the restoration of the commons—collectively shared resources, spaces, and institutions—which would remake basic relationships between people’s labor and land, encouraging values of mutuality, interdependence, and reciprocity. Weston makes clear that this means transcending colonialism and imperialism, for example through repayments of “ecological debt” by the North to the global South, as part of a larger effort to help the latter to transition to non-fossil fuel economies.

Throughout The Political Economy of Global Warming, Weston demonstrates her personal dedication to praxis. Although its theoretical contributions alone would mark the book as a major achievement, Weston’s work also contributes valuably to the concrete analysis of contemporary ecological and political-economic crises and of grassroots resistance movements. Her study of South Africa extends metabolic rift analysis to what scholars have called the “minerals-energy complex.” In her account, the political economy of South Africa, based on diamonds, gold, and coal, stands revealed as a microcosm of the “rift in the interdependent process of social metabolism, a metabolism prescribed by the natural laws of life itself,” demanding a revolutionary metabolic “restoration.”2 Neoliberal efforts to mitigate the effects of climate change, which would continue to siphon out the country’s ecological and social wealth in the form of cheap energy exports, while doing little to address crushing poverty and pollution, cannot be considered a solution. “We in the West too easily distance ourselves from what is happening in the South,” Weston writes. Advanced capitalist countries maintain an “almost pathological disassociation from what global warming really means” (157). By focusing on the harsh realities of South Africa, she directly challenges this proclivity of the global North to distance itself from the horrors of what Archbishop Desmond Tutu called “the incineration of Africa” (12).

Weston concludes the book with a sweeping vision of a future beyond capitalism, which can only be achieved “by building new political, economic and cultural systems and societies that are metabolically restorative, equitable, resilient, just, diverse, and democratic. It is a challenge that could bring the different peoples of the world together, to build something better together and make history for the benefit of all people. We cannot afford not to try, nor to fail” (197).

Scholars, scientists, politicians, and others are moved to write about climate change for a variety of reasons, including scientific advance, political influence, and public education. For Del Weston, it was clearly love. In her writing, one hears the voice of someone who loved the potential to be found in all people, the ability—and the necessity—to care for one another and the earth.

View all posts by Rebecca Clausen →