Dear Reader, we make this and other articles available for free online to serve those unable to afford or access the print edition of Monthly Review. If you read the magazine online and can afford a print subscription, we hope you will consider purchasing one. Please visit the MR store for subscription options. Thank you very much. —Eds.
Notes from the Editors
by The Editors
(Jul 01, 2017)
Topics: Imperialism Movements Political Economy Revolutions War Places: Europe Global Soviet Union (USSR) 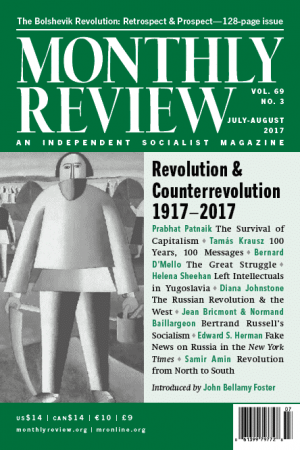 Monthly Review, we never tire of pointing out, is subtitled An Independent Socialist Magazine. From the beginning, this meant that MR was associated with no particular socialist political party, grouping, or sect, and that its analysis was open to various views on the left. To be sure MR has always been to some extent the individual product of its editors in interaction with its readers, giving it its intellectual coherence. All of MR‘s editors over its history have seen themselves as Marxists (though “Marxism is,” as the Canadian political scientist Robert Cox once said, “a rich world,” including diverse views within it). Nevertheless, MR has always sought to connect with other traditions on the left and has opened its pages to authors who would not identify themselves as Marxists, but as social liberals, social democrats, guild socialists, radicals, New Dealers, black nationalists, socialist feminists, revisionist historians, critical theorists, anarchists, and any number of other political and intellectual viewpoints—provided that these thinkers were able to engage in the rock-bottom radical questioning of capitalism.

In this special issue, the variety of views to which the magazine is open should be evident. On a topic as ambitious as “Revolution and Counterrevolution, 1917-2017” it would be irrational to expect complete agreement or to assume that one perspective has all the answers—the historical issues are too complex and the human stakes are too high. In planning this special issue, we therefore chose instead to invite some of the most profound left thinkers in the world, with whom we were familiar, to comment on this topic, certain that they would have important things to convey on the historical contours of the last century. Naturally, not all of the views expressed in this issue are ones with which we fully agree. Nor do the various authors fully agree with each other. Nevertheless, there is a common denominator in these analyses, which reinforce each other in many ways, providing in their totality a fairly coherent response to the problem of revolution and counterrevolution, from the Russian Revolution to today. Indeed, if there is a single underlying theme to the articles included here, it is that they all indicate that in interpreting revolution and counterrevolution over the last century emphasis must be placed on the strength and virulence of the counterrevolution, and that the errors of the revolutionists can only be assessed in that context.

MR readers will be interested in a new book by Paul H. Johnstone, From Mad to Madness: Inside Pentagon Nuclear War Planning (Atlanta, Georgia: Clarity Press, 2017). The core of the book is “Memoirs of a Humanist in the Pentagon” by Johnstone. But the book as a whole (the actual title is not Johnstone’s and goes somewhat beyond his purview) includes commentary in the form of two crucial essays by Johnstone’s daughter, Diana Johnstone, a contributor to this special issue of MR. Paul Howard Johnstone was for two decades a senior analyst in the Strategic Weapons Evaluation Group in the Pentagon. He was also one of the principal authors of the Pentagon Papers on the errors of the Vietnam War (famously leaked by Daniel Ellsberg, himself a Monthly Review Press author). Before the Second World War, Johnstone had worked in Franklin Roosevelt’s New Deal Administration under then Secretary of Agriculture (and former U.S. Vice President) Henry Wallace—who also went on to contribute to MR in the early 1950s. Days after Pearl Harbor, Wallace was put in charge of the Board of Economic Warfare, and brought Johnstone in to direct the Far East Enemy Division. It was this background that led Johnstone to be recruited to the Air Force Intelligence as an expert in target planning in 1949, leading to two decades as a senior intelligence analyst. His handwritten memoir was handed to Diana Johnstone in 1981 when her father was “literally on his death bed.” He asked her to “make it public.” She was unable initially, however, to get it published. “Now 35 years later,” she writes, “this document seems more pertinent than ever” (21).

Johnstone’s memoir is a riveting account of the irrationality of most strategic planning for nuclear war. It points to the failure to account for the real complexities and contingencies, thereby enhancing the chances of total catastrophe. Many of the leading figures in the development of U.S. strategic policy appear here in different, and somewhat unflattering, guises. By giving an insider’s view, Johnstone strips the veil away from nuclear war planning and reveals the intended (and unintended) courting of disaster that lies within.

It is Diana Johnstone’s informed commentary, however, that adds a sense of context, and a sense of urgency to Johnstone’s memoir, bringing out its importance in the present. In two essays, “Doomsday Postponed?” and “The Dangerous Seduction of Absolute Power,” she makes it clear that the New Cold War with Russia and the U.S. quest for “strategic primacy,” i.e., nuclear supremacy, now combine to pose potentially the gravest threat of thermonuclear war that the world has ever seen—since it is now widely believed in U.S. strategic circles that the United States can launch a first strike, known as a counterforce strategy, eliminating the nuclear arsenals (at least in land-based ICBM sites) of its opponents including Russia. The result is a shift from MAD (mutual assured destruction), which was the heart of the old nuclear deterrence strategy, to actual madness.

In the process of making this argument, Diana Johnstone addresses the Obama administration’s expansion of U.S. nuclear capabilities under the cover of the “modernization” of the nuclear deterrent. She also delves into the growing dangers of the new missile defense systems, such as those installed in Romania and those the United States has sought to deploy in South Korea, intended not so much as defensive but offensive weapons—useful mainly in stopping the smaller number of an opponent’s missiles following a U.S. first strike. What From MAD to Madness and other reports reveal (see also John Bellamy Foster’s introduction to this issue) is that we are in a new, more risk-ridden, nuclear age—and that the New Cold War presents threats even greater than the old.

Chris Dillow, who was an economist for one of Japan’s biggest banks and who more recently has been an economic writer at Investor’s Chronicle (what he calls his “day job”), has an interesting blog called Stumbling and Mumbling, that we have been drawn to a number of times, and which he describes as “left-libertarian/Marxist.” (See “Blogger Profile: Chris Dillow,” Total Politics, July 15, 2010.) On May 18, 2017, he had a blog entry called “The End of Competition,” which summed up a lot of the points now being raised about increasing degrees of monopoly and the attendant superprofits in the U.S. economy. (A key article in setting off this discussion was “Monopoly and Competition in Twenty-First Century Capitalism” by John Bellamy Foster, Robert W. McChesney, and R. Jamil Jonna in the April 2011 issue of MR.) Dillow ends his blog piece, with the following, for us, fascinating statement:

If all of this is right, and these are long-lasting changes [toward monopoly and superprofits]—which is a big if—then we need to ditch some old mental models and rediscover some others. We should abandon the idea that competition equalizes profits and restrains monopolies and perhaps return to some older Marxian ideas.

Marx thought capitalism tended to generate monopolies. Some of his followers, most famously Baran and Sweezy, thought that this would generate a tendency toward stagnation, as those monopolies generated more profits than they could spend.

For a long time these ideas were mistaken. However, at a time when we’re seeing superstar firms build up massive cash piles amid talk of secular stagnation, perhaps we need to rethink their relevance and implications.

We naturally agree, but with one small emendation. We would state instead: “For a long time these ideas were thought mistaken.” It is hardly possible to argue today, after decades of increasing concentration and centralization of capital, growing monopoly profits, secular stagnation, and financialization, that a theoretical framework which perceived all of these factors and their interrelations as they were developing, and at a time when mainstream economics saw none of them, was “for a long time mistaken.”

Correction: The epigraph on page 1 of John Bellamy Foster’s “This Is Not Populism” in the June 2017 issue of MR was mistakenly attributed to Adolph rather than Adolf Hitler. Although “Adolph” was for much of the twentieth century a common Anglicization of Hitler’s first name, it is now considered incorrect, and the German spelling is used exclusively.

Revolution and Counterrevolution, 1917–2017
The Need for Ecological Restoration