Dear Reader, we make this and other articles available for free online to serve those unable to afford or access the print edition of Monthly Review. If you read the magazine online and can afford a print subscription, we hope you will consider purchasing one. Please visit the MR store for subscription options. Thank you very much. —Eds.
Notes from the Editors
by The Editors
(Sep 01, 2017)
Topics: History Labor Marxism Movements Places: Americas United States 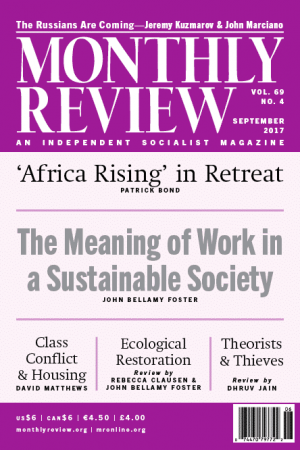 The publication last month of The Age of Monopoly Capital: The Selected Correspondence of Paul A. Baran and Paul M. Sweezy, 1949–1964, edited by Nicholas Baran and John Bellamy Foster, constitutes a landmark for Monthly Review Press. It is the second work to receive the press’s Baran–Sweezy Memorial Award, after John Smith’s Imperialism in the Twenty-First Century in 2016. Sweezy was one of the founding editors of MR, and Baran was a close advisor to the editors and an important contributor to the magazine from the beginning. Their book Monopoly Capital (1966) remains the most influential work of Marxian political economy originating in the United States. It gave rise to a whole radical tradition of critical analysis of economic concentration, secular stagnation, financialization, and imperialist globalization—a legacy that continues into the present.

Baran and Sweezy wrote around one thousand single-spaced typed pages of letters over the period covered by the collection, but more than fifty years after the publication of Monopoly Capital, this correspondence remains almost unknown. The Age of Monopoly Capital is thus a crucial addition to their body of work. Not since the correspondence of Karl Marx and Frederick Engels in the nineteenth century has there been as formidable and insightful an exchange of letters between two Marxian political economists, directly connected to their development of a major critique of capitalism. Indeed, the editors modeled this new volume in part after Marx and Engels’s Selected Correspondence, published in English in 1955. The editors have culled the crucial discussions from Baran and Sweezy’s enormous epistolary exchange, supplemented by a preface, introduction, detailed annotations and bibliographies, a chronology, index, name glossary, and archival photographs.

Baran and Sweezy’s correspondence provides deep insights into their working relationship. We see their core ideas in the making, both in relation to Baran’s pathbreaking The Political Economy of Growth (1957)—the foundational work of dependency theory—and Monopoly Capital. Many vital insights are to be found in this correspondence and nowhere else. Other ideas familiar from their published work can be understood more fully in the context of these letters, showing the intense arguments and discussions through which they worked out their views, all animated by the deep love and respect each man felt for the other.

A historical document in itself, The Age of Monopoly Capital is not simply about the writing of their magnum opus, but also provides a window onto an entire era of American life. Baran and Sweezy address nearly every major development of the Cold War and U.S. empire in the postwar decades, including the Marshall Plan, the division of Germany, the formation of the Eastern bloc, the Korean War, the McCarthy Era, Sweezy vs. New Hampshire (argued before the U.S. Supreme Court), the Soviet invasion of Hungary, the Cuban Revolution, the Bay of Pigs invasion, the Cuban Missile Crisis, the Sino-Soviet split, the Indochina War, and the future of the Chinese Revolution. They invariably brought a rigorous historical-materialist perspective to these events, presenting what Baran called “the longer view,” and developing an analysis of their time that is of more than mere historical interest.

Sweezy once said that his purpose in life was to help develop an authentic Marxian intellectual tradition in the United States. Although Sweezy continued, as coeditor of MR, to build this tradition for nearly four decades after the publication of Monopoly Capital, it was in the mid-1960s that the real foundations of this new critical tradition were laid. The Age of Monopoly Capital is the best view we have into the intellectual breakthroughs of that time, as they happened.

The Review of the Month in this issue, “The Meaning of Work in a Sustainable Society,” can be seen as part of a continuing debate on the left over the role of work in a future egalitarian, sustainable society. Recent years have seen a surge of interest in what Peter Frase, an editor at Jacobin and the author of Four Futures: Life After Capitalism, has called “post-work socialism” or the “post-work left”—a term encompassing such figures as André Gorz and Frase himself, as well as radical degrowth thinkers such as Serge Latouche and Tim Jackson. Some “accelerationist” thinkers—leftists, like Paul Mason, who argue for full automation as the wave of the future—also subscribe to such notions. According to these newly fashionable views, the primary object of a post-capitalist political economy should be minimized working hours and maximized leisure, underpinned by a universal basic income. Many of these thinkers base their ideas on the notion that automation, particularly through robots, is already replacing human labor to the extent that a “post-work” society is within reach.

We cannot go into all the weaknesses of these arguments here. But for one thing, a large part of the decline in industrial employment in the rich countries in recent decades is attributable not to automation (much less robotics), but to the shift of such work to low-wage countries in the global South, as part of a system of global labor arbitrage. Any assessment of existing work relations must consider not just technological change, but also the role of this new form of imperialism. Beyond its empirical shortcomings, to speak of a post-work society as just around the corner when workers in the global South producing Apple iPhones and Nike shoes are being “superexploited”—working extraordinarily long and grueling hours for miniscule wages, leaving them unable adequately to support their families, or even themselves—is questionable from the standpoint of egalitarianism and solidarity.

But the wider question is: what should the attitude of socialists be toward work? Marx and Engels in The Communist Manifesto wrote of “the equal liability of all to labor.” The Marxian critique, while stressing equality in work relations, has always aimed to transcend the alienation and exploitation of labor and the degradation of work. The goal is a society of creative work that fulfills the essential needs of all people—including the need for human development itself. This view was perhaps most fully expressed by William Morris, who emphasized that art was integral to work and work to art; work should therefore be a pleasure, not a punishment. (See also Harry Magdoff, “The Meaning of Work,” MR, October 1982.) In contrast, the dominant conception of work as a disutility, to which even many leftists now seem to subscribe, is itself a product of the reified reality of capitalist class society. Above all, it neglects the revolutionary potential of human beings in the creation of a world of associated labor.

One thing all socialists should be able to agree upon is that a sustainable future now depends on strengthening the power of labor globally, including higher wages and full employment. Indeed, this seems the only viable means of ultimately transcending the profit-and-wage system, and of creating a society aimed at the classic socialist principle “from each according to one’s ability, to each according to one’s need.”

Since July, MR has greatly expanded its social media presence, through the recently launched MR Online and the magazine’s Facebook page—both supervised by Associate Editor for Communications and Production, R. Jamil Jonna. We are now posting multiple items every day on MR Online, including news, essays, reviews, interviews, and more. At a critical moment for the left, MR Online has thus been able to provide analyses of a full range of the most pressing issues, events, and ideas. Readers are encouraged to join this effort, particularly on Facebook, by posting their own comments and by sharing these critical analyses with others. We also welcome new, original contributions to both MR Online and the magazine.

Corrections: In John Bellamy Foster’s introduction to the July–August 2017 issue, references to “Leo Huberman and Paul Sweezy” on pages 9 and 10 and in endnote 35 should have read “Harry Magdoff and Paul Sweezy.”

In the final paragraph of Edward S. Herman’s article “Fake News on Russia and Other Official Enemies,” also in the July–August 2017 issue, “2003” should have read “2013.”

The Meaning of Work in a Sustainable Society
Stronger Together?