Dear Reader, we make this and other articles available for free online to serve those unable to afford or access the print edition of Monthly Review. If you read the magazine online and can afford a print subscription, we hope you will consider purchasing one. Please visit the MR store for subscription options. Thank you very much. —Eds.
Notes from the Editors
by The Editors
(Jan 01, 2018)
Topics: Marxism Political Economy Places: Global 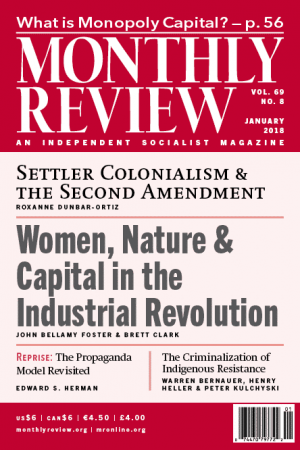 The Review of the Month in this issue, “Women, Nature, and Capital in the Industrial Revolution,” is intended as a contribution to the rapidly growing body of work on social reproduction theory, which represents one of the most remarkable attempts to extend historical materialism in our time, comparable only to the dramatic emergence of ecosocialism. This breakthrough is evident in many recent publications, including Silvia Federici’s Caliban and the Witch (Autonomedia, 2004) and Revolution at Point Zero (PM, 2012), and her essay “Notes on Gender in Marx’s Capital” (Continental Thought and Theory, October 2017); Lise Vogel’s reissued 1983 classic Marxism and the Oppression of Women (Haymarket, 2016), with a new introduction by Susan Ferguson and David McNally; Heather A. Brown’s Marx on Gender and the Family (Haymarket, 2012); and three important collections: Kate Bezanson and Meg Luxton, eds., Social Reproduction (McGill-Queens University Press, 2006), Shahrzad Mojab, ed., Marxism and Feminism (Zed, 2015), and Tithi Bhattacharya, ed., Social Reproduction Theory (Pluto, 2017). Most important from our standpoint are three landmark pieces by Nancy Fraser: “Behind Marx’s Hidden Abode” (New Left Review, March–April 2014), “Expropriation and Exploitation in Racialized Capitalism” (Critical Historical Studies, Spring 2016), and “Crisis of Care?” (in Bhattacharya, ed., Social Reproduction Theory).

Social reproduction feminism originated almost half a century ago, with the publication of Margaret Benston’s classic article “The Political Economy of Women’s Liberation” in the September 1969 issue of Monthly Review. Benston argued that “household labor, including child care, constitutes a huge amount of socially necessary labor” upon which commodity production under capitalism is dependent; that such domestic labor is chiefly carried out by women; and that this is the political-economic root of women’s oppression in capitalist society. Benston’s contribution touched off an intense international debate on the role of domestic labor in the Marxian scheme that lasted more than a decade, and played a key role in the development of Marxist and socialist feminism. A central issue in that debate was whether (commodity) value could be attributed to unpaid household work in a capitalist system. It was generally concluded that unpaid household labor did not directly promote valorization in capitalism’s alienated regime of accumulation—but that domestic labor nonetheless indirectly impacted economic value through the reproduction of labor power.

All of this, however, contributed to a deep division among feminist thinkers on the left. A majority were to follow the lead of those like Heidi Hartmann (“The Unhappy Marriage of Marxism and Feminism,” Capital and Class, Summer 1979) in charging that Marx’s failure explicitly to examine domestic labor, coupled with the “sex-blind” analysis of most Marxist theorists, had prevented historical materialism from adequately addressing women’s working conditions. Socialist feminists thus increasingly moved toward a dual-system perspective joining capitalism and patriarchy. This shift, meanwhile, was overtaken by the cultural turn in social theory, in which materialist issues such as the debate over domestic labor were largely discarded.

A few thinkers, however, continued to explore the dialectic of women’s work in all its aspects. Crucial here was the struggle, mostly in Italy, associated with the campaign for Wages for Housework, to which the pioneering theoretical works of such notable figures as Mariarosa Dalla Costa, Selma James, Leopoldina Fortunati, and Federici were related. Although these thinkers continued to argue (partly against Marx’s analysis and, more importantly, disregarding capitalism’s alienated system of economic valuation) that unpaid household labor generated value for capital, they nonetheless did so in ways that brought out many of the specificities and complexities of reproductive labor—thereby pushing the analysis forward. Hence, they increasingly emphasized how such labor, even where not directly value-generating, was connected to the capitalist accumulation process—such that the two could not be separated. Federici, Maria Mies (in Patriarchy and Accumulation on a World Scale [Zed, 1986]), and Ariel Salleh (in Ecofeminism as Politics [Zed, 1997])—important thinkers in this general tradition—extended their analyses to embrace issues of primary accumulation, imperialism, and ecological degradation. Meanwhile, Vogel developed a classical Marxian approach to social reproduction theory in Marxism and the Oppression of Women, as did Canadian historical materialists such as Luxton (see her contributions to the book Social Reproduction); Pat and Hugh Armstrong (joint authors of the Double Ghetto [McClelland and Stewart, 1984]); and Ferguson, who has written a steady stream of noteworthy articles on this subject.

The meteoric rise of interest in social reproduction theory in the last few years is a product of such continuing critical research on the margins, coupled with historical changes that have brought this tradition of thought to the forefront. Chief among the latter is the rise of neoliberalism, and its role in generating renewed crisis and dissolution in working-class families. Feminists of color and those in the global South have long challenged the failure of dominant, white feminist perspectives to take into account class, race, and imperialism. This in turn inspired the growth of intersectional theory (focusing on the intersections of gender, race, and class), giving further impetus to social reproduction feminism, with its emphasis on rooting these intersections in underlying material conditions, particularly in the family.

From our standpoint, the most impressive development in the recent rise of social reproduction theory is found in the work of Fraser, who, in the three key essays listed above, argues for an expansion of our understanding of capitalism in ways that explicitly converge with ecological Marxism, including the analysis of the metabolic rift. In Fraser’s perspective, as in ecosocialist works such as John Bellamy Foster, Brett Clark, and Richard York’s The Ecological Rift (Monthly Review Press, 2010), the weight of the analysis is placed on capitalism’s constant efforts to reproduce itself by controlling (or seeking to surmount) its absolute limits or boundaries. This means understanding how the capital system seeks to control reproductive labor/family/gender, nature/ecology/planetary boundaries, and nation-state/imperialism/race/ethnicity. A key point of agreement in this emerging synthesis, arising from both ecological Marxism and social reproduction theory, is the need to place renewed stress on expropriation, as distinguished from the exploitation of labor—what could be called the dialectic of exploitation and expropriation. Hence, the crucial contradictions in our time are not reducible to exploitation in a context of equal exchange within the value circuit of capital, but also encompass expropriation or robbery (dispossession) in the context of unequal exchange on the boundaries of the system. Today such boundary struggles, associated with “the activation of capital’s absolute limits,” reflect, in the language of István Mészáros, the widening “structural crisis of capital,” necessitating the creation of a whole new system of “social metabolic reproduction” dedicated to “substantive equality” and ecological sustainability.

With the death of James O’Connor in November 2017, at age eighty-seven, the world lost one of the foremost Marxian political economists (and contributors to Monthly Review) and a key figure in the ecosocialist tradition. Writing twenty years ago in the Review of Radical Political Economics, MR editor John Bellamy Foster called O’Connor “the leading representative of ecological Marxism.”

O’Connor will likely be best remembered for two achievements: his landmark book The Fiscal Crisis of the State (1973), which brought altogether new elements to bear on Marxist theorization of the state; and his role in founding the journal Capitalism Nature Socialism in the 1990s, developing in the process a distinctive approach to ecological Marxism known as the “second contradiction theory.” His most enduring contribution to the ecological discussion was undoubtedly his incorporation of Marx’s concept of “conditions of production” into an ecological critique of the system, in what has been described as a synthesis of the ideas of Marx and Karl Polanyi.

In addition to his contributions as a major Marxist theorist, O’Connor, as his long-time partner Barbara Laurence rightly reminds us (“James O’Connor Testimonials,” Center for Political Ecology, http://centerforpoliticalecology.org), was a political activist, especially in his early years. This included “his days in Cuba helping to stabilize the revolutionary government; his leaving relatively safe New York for the dangers awaiting his bus caravan to the South during the Freedom Rides; and his part in organizing the Faculty Against the War during the horrible days of Viet Nam.” In this and many other respects, he was a model for us all.

Women, Nature, and Capital in the Industrial Revolution
Patriarchies East and West