Dear Reader, we make this and other articles available for free online to serve those unable to afford or access the print edition of Monthly Review. If you read the magazine online and can afford a print subscription, we hope you will consider purchasing one. Please visit the MR store for subscription options. Thank you very much. —Eds.
Notes from the Editors
by The Editors
(Feb 01, 2018)
Topics: Political Economy Places: Americas United States 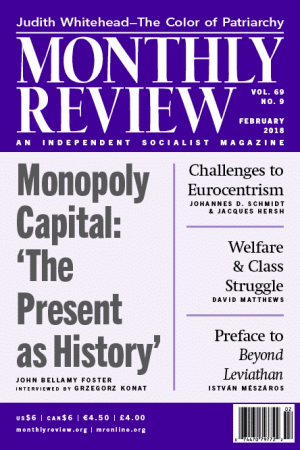 The Fall 2017 issue of the journal Continental Thought and Theory, available online, includes an article by Riccardo Bellofiore entitled “Between Schumpeter and Keynes: The Heterodoxy of Paul Marlor Sweezy and the Orthodoxy of Paul Mattick,” that raises issues of clear interest to many MR readers. Bellofiore wrote his dissertation on Rosa Luxemburg’s Marxian theory of crisis. He is a professor of economics at the University of Bergamo and an editor, with Ewa Karwowski and Jan Toporowski, of The Legacy of Rosa Luxemburg, Oskar Lange, and Michał Kalecki: Essays in Honour of Tadeusz Kowalik (discussed by John Bellamy Foster in this issue’s Review of the Month). Other important works by Bellofiore that we are aware of include three essays with Joseph Halevi: “Deconstructing Labor: What is ‘New’ in Contemporary Capitalism and Economic Policies: A Marxian-Kaleckian Perspective,” MR Online, April 9, 2009; “Magdoff-Sweezy, Minsky and the Real Subsumption of Labour to Finance,” in Daniela Tavasci and Jan Toporowski, eds., Minsky, Crisis and Development (Palgrave Macmillan, 2010); and “The Global Crisis and the Crisis of European Neomercantilism,” in Leo Panitch, Greg Albo, and Vivek Chibber, eds., Socialist Register 2011 (Monthly Review Press, 2010).

Bellofiore focuses the greater part of “Between Schumpeter and Keynes” on the work of Sweezy, including a discussion of his arguments in support of Marxian value theory, a scrutiny of the famous Sweezy-Schumpeter debate in the 1940s, and a consideration of Paul Baran and Sweezy’s analysis of wages in “Some Theoretical Implications,” a missing chapter of their 1966 book Monopoly Capital published in the July–August 2012 issue of MR. Particularly significant is Bellofiore’s treatment of Sweezy’s dynamic theory of monopoly capital. But the essay’s most noteworthy contributions, in our view, relate to Harry Magdoff and Sweezy’s role in the 1970s and ’80s in developing a theory of financialization, and what their analysis can tell us about our current situation. Bellofiore writes that the group around Sweezy “was able to perceive—much more than the rest of Marxism and post-Keynesianism”—the growth of financialization as a systematic response to the economic crisis tendencies within production. Beginning in the late 1970s,

Sweezy, almost always together with Harry Magdoff, substantially enriched the theory of monopoly capitalism, grasping with remarkable timeliness the crucial role of debt and finance…. Already in the second half of the Seventies Sweezy and Magdoff stress that the explosion of debt, both public and private, introduces qualitatively novel mechanisms, signalling a discontinuity…. The two Marxists…identify a tendency to a “shortening” of debt. A few years later in the collection of 1981 [The Deepening Crisis of U.S. Capitalism], they detected, in real time, the systematic increase in the ratio between household consumption and disposable income. These phenomena stemmed from—but also replied to—the stagnation tendency: hence the ratio between household consumption and disposable income went into a spiral helping to prevent a full realization of that tendency. (94–95)

Most important today are Bellofiore’s conclusions. Looking at the developed financialization of monopoly-finance capital in the twenty-first century, he notes that

This new form of financialization is better understood as an authentic “real subsumption” of labour to finance (to the financial markets and to the banks). It has not only included “households” in a subaltern way. It has also, on the one side, accelerated the “deconstruction” of labour in many ways, heavily affecting capitalist labour processes; on the other, it has internally stimulated a rise of effective demand, politically manoeuvred. A sort of paradoxical “privatized Keynesianism,” of [a] financial nature [has emerged]…. The world of workers has been everywhere consigned to insecurity, and has been burdened with risks and adjustment costs. Instability has been repressed within an ultimately unsustainable capitalism, in which capital’s tendency to a systemic crisis has re-emerged in new and violent forms…. In a word, what is at stake by now are the conditions of existence and reproduction of human beings in their entirety. (107–08)

It was drawn to our attention that the Review of the Month in the January issue (“Women, Nature, and Capital in the Industrial Revolution” by John Bellamy Foster and Brett Clark) neglected a major early Marxist contribution to social reproduction theory, Eli Zaretsky’s Capitalism, the Family, and Personal Life (Harper and Row, 1976). What makes Zaretsky’s analysis of particular interest in this context is his discussion of “The Proletarian Family” (62–65), in which he may well have been the first to point to what has since become a core thesis of social reproduction theory: that “early socialists did not experience the family as a ‘separate’ political problem” where the working class itself was concerned. This was because the working-class “family’s internal life was [then] dominated by the struggle of its members for their basic material needs,” reflecting the reality that “industrial capitalism was destroying the [working-class] family.” It was this that led to “protective legislation” in the late nineteenth century, transforming the household and employment within industry into two so-called separate spheres. If Marx and Engels and other socialists of the mid-nineteenth century failed to see the contradictions that would emerge in the later evolution of the family under capitalism, this was a result of the conditions of their times, as well as their overly optimistic revolutionary expectations about the imminent triumph of socialism. In addition to this crucial point, Zaretsky’s work explores many others that are hardly less important. Capitalism, the Family, and Personal Life is definitely a classic, one well worth studying today.