Dear Reader, we make this and other articles available for free online to serve those unable to afford or access the print edition of Monthly Review. If you read the magazine online and can afford a print subscription, we hope you will consider purchasing one. Please visit the MR store for subscription options. Thank you very much. —Eds.
Review
by Helena Sheehan
(Mar 01, 2018)
Topics: Ecology Marxist Ecology Places: Global 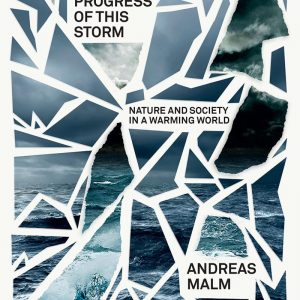 Andreas Malm, The Progress of This Storm: Nature and Society in a Warming World (Verso, 2018).

Helena Sheehan is a professor emerita at Dublin City University and the author of Marxism and the Philosophy of Science, The Syriza Wave, and a forthcoming memoir, Navigating the Zeitgeist.
Andreas Malm, The Progress of This Storm: Nature and Society in a Warming World (London: Verso, 2018), 256 pages, $24.95, hardback.

In his prize-winning 2016 book Fossil Capital, Andreas Malm traced the history of climate change from nineteenth-century Britain to twenty-first-century China, emphasizing the connection between carbon-driven development and capitalist accumulation, culminating in the catastrophic implications of climate change. In his latest book, The Progress of This Storm, he turns his attention to an array of theories that he feels are undermining our capacity to understand and act on climate change.

Malm begins by characterizing the postmodern condition, with its simultaneous obliteration of history and nature. Citing Fredric Jameson on postmodernism, he observes that today, “we are stranded in the mega-city where glass surfaces mirror each other, where images and simulacra rule over night and day, where the free play of masks and roles goes on and on without any real, material substance. But towards this city a storm is on the move” (2). Malm speaks of the age of omnipresent screens as an ever-expanding house of mirrors, free of any depth, memory, or long-term expectations. While I sympathize with the thrust of Malm’s argument, I want to remind him that much of the research and communication about climate change also goes on in this digital world. Indeed, it is within this world of screens that I am receiving, reading, and reviewing his book. This more grounded participation in cyber-life needs to be integrated into our conception of the digital world, however tempting it is to go the way of hyberbole.

Nevertheless, Malm is right to argue that climate change supercharges our moment of time. Postmodernity, penetrating our psychic condition, is being confronted by its antithesis. Yet denial remains the hallmark of the present.

The “storm” that Malm foresees promises to bring back time, as the fires lit in the past prompt questions of what can be done in the present to prevent catastrophe in the future. Every sentence of this book is suffused with urgency about understanding and resisting climate change.

To this end, Malm surveys the ways that contemporary social and political theorists have understood the relation between nature and society. He scrutinizes various theories and asks if any of them provide a map of the path of the storm and our options in the face of it, directing special attention (and ire) toward those that have only cluttered or obscured that map. Subsequent chapters focus on a series of theoretical currents—constructionism, hybridism, post-humanism, actor-network theory, new materialism—and theorists, such as Noel Castree, Donna Haraway, Paul Wapner, Adam Trexler, and many more. Chief among his opponents is Bruno Latour, whose work embodies the postmodernization of science studies.

These chapters are closely argued polemics with blistering conclusions. As the biosphere began to catch fire, Malm contends, social theory retreated further from sooty matter into airy text. He takes issue with theories that dissolve all distinctions between the natural and the human into assemblages of “actants,” with none more central or determinant than any other. After all, as Latour observes, hammers hit nails and kettles boil water. Beasts, clouds, acids, rivers, and trees, then, are the co-creators of history.

Contra Latour and others, Malm insists that intentionality is essential to agency. If anything and everything is accorded agency, the concept is not enhanced but eviscerated. It allows no contrastive effect and forecloses responsibility for human activity. An analytic distinction between nature and society is necessary to deal with ecological crisis – indeed, to make any sense of many things. Yes, there is one substance – matter – but it gives rise to emergent properties, which are connected and interactive, while not reducible to each other. There is something qualitatively different between, say, the rotation of the planet and gentrification of a neighborhood, between photosynthesis and United Nations climate negotiations. Latour, a master dissolver of distinctions, ends up with a philosophical program and a prose style evacuated of meaning, “an orgy in the mud” (187).

Malm likewise shows how theories such as idealist constructionism and new materialism, which might seem opposed, in fact tend to converge. Both collapse nature and society: if idealism posits that we can do anything, new materialism means we can do nothing. Both are dissimulating and disempowering.

The epistemological nihilism of constructionism has undermined scientific knowledge and can even be used to support climate denialism. After all, if we slide “down the slope where everything and nothing is true and false at the same time” (173), where are the grounds for seeing things one way rather than another? If there is no climate change, only stories about climate change, where is the imperative to do something rather than nothing?

Global warming urgently requires us to break with both epistemological anti-realism and political neoliberalism. Turning from his list of theoretical dead ends, Malm makes the case for Marxism, which, he claims, outshines all contenders in the realm of both theory and practice, demonstrating its superior conceptual insight into our environment in epistemological, historical, sociological, political, and economic terms. He cites the work of John Bellamy Foster, Ian Angus, Kate Soper, and others for making the most persuasive case about both the nature of the problem and the path to a solution. Any analysis of climate not connected to an analysis of capitalism is bound to be uncomprehending and ineffectual.

Malm believes that countering the threat of climate change demands the total de-carbonization of the global economy, and the expropriation of the top 1 to 10 percent of global wealth. Instead of progressing in this direction, the present era seems to be a time of regression, both ecologically and politically. The warming condition will not only intensify extreme weather events, but also deepen and multiply social fractures. Those most at risk are the world’s poorest people, those most marginal to circuits of capital. The wealthiest, with their fortified towers, gated communities, and reserve generators, may be able to shield themselves to a point, but ultimately not even they can escape it.

Malm concedes that theories can only play a limited part in tackling the vast injustices of our times, but at least they should not act as obstacles to understanding and action. This book maps those obstacles and proposes a path through them. I hope it will be read by readers in need of such clarity and direction, particularly those who have come under the unfortunate influence of anti-science science studies and anti-systemic social theory.

View all posts by Helena Sheehan →