Dear Reader, we make this and other articles available for free online to serve those unable to afford or access the print edition of Monthly Review. If you read the magazine online and can afford a print subscription, we hope you will consider purchasing one. Please visit the MR store for subscription options. Thank you very much. —Eds.
Notes from the Editors
by The Editors
(Mar 01, 2018) 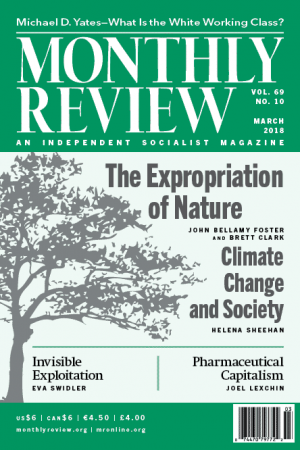 In January 2018, the Bulletin of the Atomic Scientists moved its doomsday clock forward by thirty seconds, to two minutes to midnight, indicating that the world is now as close as it has ever been to doomsday—tying 1953, at the height of the Cold War—due to growing threats of both nuclear war and irreversible, catastrophic climate change.

In this context, Daniel Ellsberg’s new book The Doomsday Machine: Confessions of a Nuclear War Planner (Bloomsbury, 2017)—the most important concrete warning with respect to nuclear war preparations to appear in decades—takes on added urgency. Ellsberg is best known for his role in leaking the Pentagon Papers, of which he was an author. But as a special assistant and then consultant to Secretary of Defense Robert McNamara, Ellsberg also played a central role in nuclear war planning. He was the principal author of what he calls in this book “the other Pentagon Papers”—a set of documents which were, in his view, of even greater significance, since they detailed U.S. preparations for nuclear war (6).

In 1971, Ellsberg had carefully separated these nuclear war papers from what were to be the Pentagon Papers, and decided, because of the urgency of the Vietnam War, to leak the latter first, followed by the former. But with the FBI after him, Ellsberg had his brother Harry hide the nuclear war papers in his backyard in Hastings-on-Hudson, New York. Harry then transferred them (just ahead of the FBI) to a pit dug at the edge of a municipal waste dump, where they could easily be recovered—but when a tropical storm hit the area, caving in parts of the dump, the papers were irretrievably lost.

Nevertheless, in the decades since, many of those nuclear war planning papers have been declassified, and Ellsberg himself retained numerous documents, which he has posted on his website, http://ellsberg.net. It was therefore possible for him finally to tell the story of “the other Pentagon Papers” and the doomsday machine, with sufficient corroboration to make it credible.

It is difficult to convey the extraordinary range of revelations and—more importantly—the careful, probing analysis that Ellsberg presents. A number of these, though, should be mentioned. The doomsday machine dramatized in Stanley Kubrick’s 1964 film Dr. Strangelove, is, it turns out, substantially real. Due to the shift of nuclear war strategy toward “decapitation”—targeting and removing leaders—the feared general thermonuclear exchange has in effect been put on automatic. Any nuclear attack on Moscow or Washington would set off “doomsday machines,” i.e., virtually automatic general thermonuclear exchanges, threatening the population of the entire earth—propelling so much smoke into the upper atmosphere from fires in a thousand or more cities as to create a nuclear freeze and famine, resulting in omnicide. Similar automatic doomsday machine plans have been adopted by all the other nuclear powers: Britain, France, China, India, Pakistan, Israel, and North Korea.

But perhaps Ellsberg’s most important argument of all is one he had already presented in his article “Call to Mutiny,” in the September 1981 issue of Monthly Review (adapted from the foreword to the book Protest and Survive, edited by E. P. Thompson and Dan Smith, published by Monthly Review Press). That essay, in conjunction with his new book, gives a thoroughly documented analysis of how nuclear weapons have been used again and again—most often by the United States—as threats directed at various nation-states to achieve geopolitical ends. Each such use of nuclear weapons as a threat takes us closer to the precipice of all-out nuclear war. Ellsberg has all sorts of proposals for “dismantling the doomsday machine,” including a call for the United States and all other nuclear powers to back off from their first-strike postures. He ends his book by quoting Martin Luther King, Jr.: “We still have a choice today: nonviolent coexistence or violent coannihilation” (350).

Ellsberg’s warnings have taken on added significance with the release in February of the Trump administration’s 2018 Nuclear Posture Review. In the document, the Pentagon insists that “post-Cold War….norms” have been broken with the resumption of “Great Power competition” from Russia and China, and requests a doubling of current U.S. spending on nuclear arms over the next decade. This would include the deployment of major new nuclear weapons capacities, such as submarine-launched cruise missiles with nuclear warheads. The report staunchly reaffirms U.S. commitment to first use of nuclear weapons against what it deems to be nuclear or conventional military threats toward itself or others (extending beyond mere allies). Commenting on an earlier (but substantively similar) leaked version of the report, Lisbeth Gronlund, senior scientist and co-director of the Global Security Program at the Union of Concerned Scientists, concluded:

The new policy would make nuclear war more likely and undermine national security. It would expand the range of scenarios under which the president could decide to use nuclear weapons. It intentionally lowers the threshold for the use of nuclear weapons by calling for the development of several new types of “usable” nuclear weapons, including one that could be deployed on submarines in the near future. It also calls for tighter integration of U.S. nuclear and conventional forces, which deliberately blurs the line between them and eliminates a clear nuclear firewall. (“Leaked Nuclear Posture Review Lays Out Policy Changes That Would Increase Risk of Nuclear War,” Union of Concerned Scientists, January 12, 2018)

We were thrilled to receive the following letter in January from Gareth Murphy in Ireland, and are happy to share it, with his permission, with MR readers:

I’ve subscribed to MR for a long time, since I was about eighteen, although I had to cut back on my sub when the crisis hit etc.; but it comes in every month through the letterbox and all my kids (eight-year-old daughter and twin four-year-old boys) always take note of the different colours! But interestingly, over the last year or so, my daughter’s political consciousness has been developing. 2016 was the hundredth anniversary of the 1916 anti-imperialist uprising against Britain in Ireland, led by Marxist socialist James Connolly, and my daughter took an interest in this and began asking why we were shooting the English and why they were shooting back etc. A six-year-old’s view of the rising, but in school, thanks to a really good teacher, she also learned about the living conditions of the Dublin working class and that helped explain why “we were shooting the English.” Fast forward a year and Trump is elected, and even in Ireland kids in her class are saying Trump is bad and isn’t good for the environment or people. So that gave me an in to show her a number of articles in MR about Trump. I’m not getting carried away that she understands the metabolic rift as brilliantly espoused by MR and JBF or the Anthropocene but it is great to see her aware and interested in MR and if I pass that on to her I’d be delighted!

Paul J. Nyden, who from 1982 on worked as an award-winning reporter for the Charlotte Gazette and who wrote “Rank-and-File Rebellions in the Coalfields, 1964–80” for the March 2007 issue of Monthly Review, died on January 6, 2018, at the age of seventy-two. A native of New York, Nyden went to West Virginia in the early 1970s and joined the campaign of Miners for Democracy, aimed at the reform of the United Mine Workers of America. He earned his doctorate in sociology at Columbia, where he defended his dissertation on Miners for Democracy, Struggle in the Coalfields in 1974. He was then hired as an assistant professor of sociology at the University of Pittsburgh, teaching courses on topics such as Minorities, Social Problems, the Sociology of Labor, and Marxism. He remained active in miners’ struggles and was coeditor of the Miner’s Report, supporting rank-and-file miners. He also struggled to have black faculty hired at the University of Pittsburgh. In 1976, despite being a popular teacher, Nyden was fired for overtly political reasons. The FBI had sought to recruit students to infiltrate his classes, and senior faculty members in his department, most of whom had consulted for large corporations, were almost uniformly hostile, voting for his dismissal. The university’s board of trustees was likewise then dominated by executives from Mellon Bank, Gulf Oil, Consolidated Coal, and U.S. Steel, all opposed to the coal and steel unions, which strongly supported Nyden. The chair of the sociology department, Burkart Holzner, openly declared that Nyden was fired on political grounds (including his Communist Party membership). The American Sociological Association demanded that the university release secret reports on Nyden’s dismissal. Eventually he accepted a financial settlement in his federal legal case against the university and turned to what was to be a distinguished career in journalism. His books include The Coal Miners in the United States (1974) and Showdown in Coal (1978). For more on Nyden’s firing and the ensuing legal battle, see “Academic Repression: The Case of Paul Nyden,” Insurgent Sociologist 6, no. 4 (1976): 3–4; and “Update on Paul Nyden,” Insurgent Sociologist 7, no. 1 (1977): 69–70.

Robert Frederick Young, Jr., an assistant professor at the University of Texas at Austin School of Architecture and the author of two important reviews in Monthly Review, died unexpectedly on January 6, 2018, at the age of fifty-eight. He was, in addition to being an immensely warm person, an extraordinarily creative figure in urban ecology. While at the University of Oregon, he served as an adviser to several Oregon governors, and co-founded the university’s Sustainable Cities Initiative, lauded by the New York Times and Fortune as the most comprehensive university program for sustainability and community outreach in the nation. Earlier, he was the founder of American Soil, Inc., a large New Jersey composting company, at the time a promoter of state-of-the-art organic methods. He was appointed by Governor Christine Whitman as director of the New Jersey Commerce Department’s Office of Sustainability.

In December 2013, Young wrote the review-essay “Rebellious Cities” for MR, on David Harvey’s book Rebel Cities. There he cited the work of the early urban ecologist and exponent of garden cities Patrick Geddes, a figure he much admired and from whom he drew inspiration. More recently, in the November 2017 issue, Young surveyed the history of the Industrial Workers of the World, in a piece called “One Big Union, One Long Fight,” which discussed the 1979 documentary film The Wobblies, along with Fred W. Thompson and Jon Bekken’s book The Industrial Workers of the World. He ended the article with these words: “As the global economy grows increasingly unstable, undermining job security and the dignity of work, the IWW’s pioneering tactics, and perhaps even the union itself, may again be the means by which working people of all walks of life secure ‘the good things in life’ while building ‘a new society within the shell of the old.’”