Dear Reader, we make this and other articles available for free online to serve those unable to afford or access the print edition of Monthly Review. If you read the magazine online and can afford a print subscription, we hope you will consider purchasing one. Please visit the MR store for subscription options. Thank you very much. —Eds.
Notes from the Editors
by The Editors
(Mar 01, 2019)
Topics: Imperialism Places: Americas Venezuela 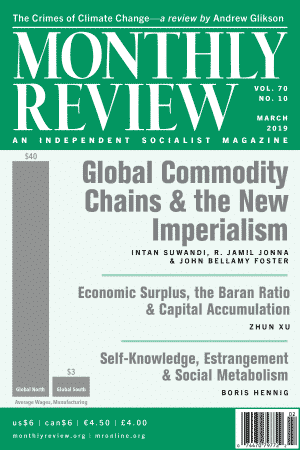 As we write these notes in the first week of February 2019, the United States is openly directing a political-economic coup in Venezuela. At the same time, it has announced that it is unilaterally withdrawing from the Intermediate-Nuclear Forces (INF) Treaty. Together, these events, taking place in late January and early February, mark a new escalation of U.S. imperialism, threatening the entire world.

On January 23, only weeks after the inauguration of Nicolás Maduro into a new term as president of Venezuela, Juan Guaidó, a right-wing politician who had never run for president and whose name was unknown to more than 80 percent of the Venezuelan population, proclaimed himself president of Venezuela. He denounced the elected president Maduro—for whom more than two thirds of voters and 31 percent of the Venezuelan electorate cast their votes in the 2018 Venezuelan elections (as opposed to a minority of voters and only 26 percent of the U.S. electorate in favor of Donald Trump in the 2016 U.S. elections)—as an “usurper” (Ben Norton, “Internal U.S. Gov’t Document Outlines Program of ‘Economic Warfare’ on Venezuela,” Grayzone, January 30, 2019; Joe Emersberger, “When Is a Democracy Not a Democracy?” Mint Press News, January 28, 2019). Guaidó was immediately declared the legitimate president of Venezuela by the United States. Washington proceeded to impose what was, in effect, an embargo on Venezuelan oil coming into the United States, while seizing control of the assets of Citgo, the Venezuela-owned oil company in the United States, in the name of the coup plotters. Meanwhile, the Bank of England, at U.S. urging, removed the Venezuelan government’s access to its $1.2 billion in gold reserves.

The present ongoing coup attempt organized in Washington is simply the latest in a series of such attempts by the U.S. government to overthrow the Bolivarian Republic of Venezuela over the last two decades. It can be seen as having three interrelated motives: (1) the destruction of Venezuelan socialism, (2) regaining control of Venezuela’s oil (the largest petroleum reserves in the world), and (3) reasserting U.S. hegemony over Latin America. The United States has backed three successful Latin American coups in the last decade: Honduras (2009), Paraguay (2012), and Brazil (2016). Venezuela, however, is the hardest nut to crack since it is ruled by an elected socialist government and backed by the largest mass of the population and most of Venezuela’s poor, who strongly support the revolutionary process and are virulently opposed to U.S. imperialism.

To understand the nature of the January 2019 coup unleashed against Venezuela, it is important to see it in terms of its basis in economic warfare designed to undermine the sovereignty of the Venezuelan state. Former United Nations (UN) special rapporteur, Alfred de Zayas, declared in a UN report on Venezuela, completed in August 2018, that the “economic sanctions and blockades” like those being imposed by the United States on Venezuela in defiance of international law were “comparable with medieval sieges of towns. Twenty-first century sanctions attempt to bring not just a town but sovereign countries to their knees” (United Nations, Report of the Independent Expert on the Promotion of a Democratic and Equitable International Order on his Mission to the Bolivarian Republic of Venezuela and Ecuador, August 3, 2018, 14; “Venezuela Crisis: Former UN Rapporteur Says US Sanctions Are Killing Citizens,” Independent, January 26, 2019).

U.S. imperial planning, in this respect, has been lodged heavily in the Council on Foreign Relations (CFR), commonly known as “the imperial brain trust” and as “Wall Street’s think tank” (see Laurence H. Shoup and William Minter, Imperial Brain Trust [Monthly Review Press, 1977] and Laurence H. Shoup, Wall Street’s Think Tank [Monthly Review Press, 2019]). In September 2018, CFR President Richard N. Haass—who in 2000 wrote an article entitled “Imperial America” on the need for the resurrection of U.S. imperial domination of the globe, and subsequently served as director of policy planning for the Department of State in the George W. Bush administration, helping to direct regime change in Iraq, before becoming president of the CFR in 2003—came out with an article arguing for U.S. regime-change intervention in Venezuela. According to Haass, presenting the general view of the CFR, a U.S. “humanitarian” military intervention in Venezuela was necessary (see Richard N. Haass, “What the Crisis in Venezuela Reveals,” CFR, September 26, 2018; John Bellamy Foster, Naked Imperialism [Monthly Review Press, 2006], 97–106.)

But it is through its promotion of U.S. economic warfare under the rubric of geoeconomics that the CFR has played a central role in paving the way to the coup in Venezuela. The strategy is to employ more systematic techniques of “smart” economic sanctions to destroy the country, as articulated particularly by CFR authors Robert D. Blackwill and Jennifer M. Harris in their War by Other Means (Harvard University Press, 2016), which has become the manual of CFR’s Greenberg Center for Geoeconomic Studies devoted to promoting U.S. economic warfare (inspired by the U.S. Office of Economic Warfare in the 1940s). Blackwill was himself an advisor to George W. Bush on Iraq, serving as a presidential envoy to Iraq, and was critically responsible for the privatization of Iraqi oil. Blackwill and Harris note in their book that, forty years ago, cross-border economic flows were mostly trade based, while now they are financially based, allowing for massive disruption of such flows by the United States and other advanced economies and their corporations, representing the “capitals of capital” (War by Other Means, 53). The primary target of U.S. geoeconomic warfare, according to Blackwill and Harris, should be China, which has been offering generous loans to Venezuela in return for oil. Attacking Venezuela, with which China is economically aligned, is thus seen as part of the long-term strategy of undermining China geoeconomically—in addition to reasserting U.S. control over Venezuela and its oil and crushing any idea of a successful socialism.

Amy Myers Jaffe, a fellow of the CFR’s Greenberg Center for Geoeconomics, took part in the writing of CFR policy documents with respect to oil privatization in U.S.-occupied Iraq. In the context of the current coup in Venezuela, Jaffe wrote a January 28, 2019, CFR article entitled, “No Easy Path for Venezuela’s Oil in the Struggle for a Transition in Power,” strongly in support of Guaidó’s right-wing political coup and already planning the takeover of Venezuelan oil. Comparing the situation in Venezuela to Iraq, Jaffe argues that the United States, after a successful coup overthrowing the Bolivarian Republic under Maduro, will have to pour billions of dollars into propping up Venezuela’s oil industry and increasing production, especially in the face of what she says will be “multiple renegade armed groups operating inside Venezuela, including Cuban mercenaries.” She strongly implies that this will require the stability offered by U.S. troops. Key to the success of the coup, she observes, will be that “U.S. actions have already in effect embargoed imported Venezuelan crude to Citgo and other U.S. buyers,” as well as seizing Venezuelan oil and gold assets abroad, severing the country from much of its economic wealth. What made this strategy possible is what Blackwill and Meghan O’Sullivan in 2014 referred to in an article for Foreign Policy as the new U.S. petropower arising from fracking (Shoup, Wall Street’s Think Tank, 198). The increased energy independence and leverage of the United States over world oil now gives it the latitude to crush a petrostate such as Venezuela without damaging the U.S. economy. In response to U.S. sanctions, the Venezuelan government, out of necessity, recently moved away from denominating its petroleum sales in dollars. Two other petrostates previously adopted this strategy: Iraq and Libya. Both were annihilated in U.S. regime-change actions.

Even more ominous in the escalation of U.S. imperialism was the Trump administration’s official declaration on February 2 that it is unilaterally withdrawing from the INF Treaty, requiring, under the provisions of the treaty, a six-month withdrawal period before it can take effect. This led to a succinct statement by the Campaign for Nuclear Disarmament based in Britain, which had led the mass popular struggle against intermediate-range nuclear missiles in the 1980s:

Trump has announced that he will withdraw the U.S. from the INF treaty. This treaty has been a bedrock of nuclear arms control, having eliminated thousands of deadly nuclear missiles in Europe. This is a very dangerous moment for the whole world. A new nuclear arms race is emerging and the threat of nuclear war grows by the day. The movement must be ready to rise up and oppose the return of US nuclear missiles on British soil if the treaty is to be scrapped at the end of the 6-month withdrawal period. (Campaign for Nuclear Disarmament, “Trump Abandons INF Treaty,” February 1, 2019)

The struggle against a new nuclear arms race that would imperil the population of the entire world must be one of the highest priorities of our time. With the ending of the Cold War in the late 1980s, the greatest symbol of which was the signing of the INF Treaty by Ronald Reagan and Mikhail Gorbachev, fears of nuclear war abated and the peace movement demobilized. It is now time for a new world mobilization on behalf of peace to counter the dangerous escalations of our time, which means, first of all, confronting U.S. imperialism.

The death on January 23, 2019, of the brilliant Marxist sociologist Erik Olin Wright, former president of the American Sociological Association and MR author (who coauthored, along with David A. Gold and Clarence Y. H. Lo, the two-part “Recent Developments in Marxist Theories of the Capitalist State” in Monthly Review, October and November 1975) is a major loss to left analysis in the United States. He was a warm and generous individual who freely offered his support at various times to individuals on the MR editorial committee. We heartily recommend the tribute to him written by Vivek Chibber, “Erik Olin Wright (1947–2019)” on the Jacobin website (January 24, 2019).

Tan Swie Ling, a survivor of the 1965 mass killings in Indonesia, passed away on January 22, 2019. Tan was interviewed by Intan Suwandi for the December 2015 issue of Monthly Review regarding his thoughts and experience as a survivor. Under Suharto’s New Order regime, Tan spent thirteen years in confinement, surviving torture, isolation, and starvation before he was released in 1979. With Suharto’s fall in 1998, he remained active as a political and human-rights activist, writing several books in Indonesian, including G30S 1965, the Cold War and the Destruction of Nationalism (Komunitas Bambu, 2010), in which he highlighted the role of the United States as an imperialist power in the mass killings.