Dear Reader, we make this and other articles available for free online to serve those unable to afford or access the print edition of Monthly Review. If you read the magazine online and can afford a print subscription, we hope you will consider purchasing one. Please visit the MR store for subscription options. Thank you very much. —Eds.
Exchange
by John Bellamy Foster, Brett Clark and Christian Stache
(May 01, 2019)
Topics: Ecology Marxism Marxist Ecology Places: Global 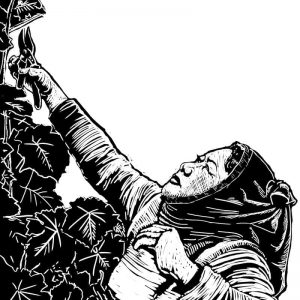 Silvia Correra, who commutes from the Stockton area to work in Napa Valley vineyards, is one of the laborers profiled in Chasing the Harvest. Illustration by José Cruz / Heyday Books.

Ted Benton writes in his reply that our essay “Marx and Alienated Speciesism” is “devoted to showing that my reading was mistaken and to defending Marx’s position.” This is a mischaracterization of our article, which takes as its springboard specific charges directed at Marx, particularly of his early writings, issued by Benton and four other critics, and uses these indictments to delve systematically and in great detail into the nature of Marx’s argument in this area, reconstructing his views. Benton is mentioned a number of times in the first half of our article and not at all in the second half. In his reply, Benton states with respect to the second half of our article: “I appreciate and agree with Foster and Clark’s account of the later development of Marx’s work, which is quite consistent with my own view of the transitional character of the Manuscripts and my recognition of the shift in his thinking by the time of his statement about Darwinian evolutionism being ‘the foundation in natural history for our whole outlook.'”

Benton, however, continues to hold onto his original criticisms of the early Marx, challenged in the first part of our article, which included his charges that Marx was guilty of “a quite fantastic species-narcissism” and “an extreme and unequivocal human/animal dualism,” based on the “dualist philosophy of Descartes.” Benton, we also note in our article, suggested that a single sentence distinguishing human beings from animals, to be found in Marx’s Epicurean Notebooks, written in preparation for his doctoral dissertation when he was twenty-one years old, constituted proof of Marx’s early speciesist outlook. We called into question all of this, providing evidence to the contrary.

Oddly, Benton in his reply does not respond directly to a single one of our concrete criticisms countering his allegations with regard to the speciesist character of Marx’s early thought, except to say, with respect to the one sentence that he extracted out of context from the twenty-one-year-old Marx’s Epicurean Notebooks, that he remains firmly convinced the meaning there is self-evident. By distinguishing human beings from (other) animals based on their reasoning powers, Marx had, we are told, adopted a speciesist view. Benton persists in advancing this indictment in his reply even while acknowledging that in our article we provide “impressive classical scholarship” demonstrating that this particular sentence in Marx cannot be viewed apart from the passages that surround it, which point to the commonalities between humans and nonhuman animals, conceived as material beings, while highlighting the distinct cognitive abilities of human beings that set them apart from other animals. Reason, Marx argues in his critique of Plutarch in this part of his Epicurean Notebooks (and in the related appendix to his dissertation), allows human beings to surmount the “animal fear” that Plutarch sees as the necessary basis of the religion of the masses. Needless to say, such an argument on Marx’s part can hardly be characterized as a speciesist attack on nonhuman animals.

These issues could have led to an important debate, which was our intention. But in his reply, Benton chooses neither to defend his original interpretation that Marx was guilty of “a quite fantastic species-narcissism,” nor to discard that interpretation. Instead, he greets our responses to his indictments of Marx with a stony silence—offering a nonreply reply. Skirting the issues that we addressed (and for the most part those of Christian Stache as well), he goes on to discuss the overall “value of Marx’s ideas,” including the materialist conception of history. Here, at least, we are in accord.

I appreciate Ted Benton’s reply to John Bellamy Foster and Brett Clark’s essay and to my critique of his interpretation of Karl Marx’s Paris Manuscripts. I read his contextualization of the influential paper he published over thirty years ago with great interest. However, Benton mainly reiterates his positions. This is completely legitimate and a common strategy, particularly when a scholar can still stand by what they wrote. Therefore, the purpose of the following is not to repeat what I already set out in length and detail in my article. Instead, I want to respond to some of his objections to my argument.

First, I would like to point out that it is hardly possible to exaggerate the influence of Benton’s reading of the Manuscripts within human-animal studies and critical animal studies. There is almost no contribution that deals with Marxism and animals that does not refer to Benton. As I stated in my original article, for example in the fifth endnote, I think that Benton has made important contributions to developing Marx’s legacy in this field. The strengths of his thinking, with respect to the animal question, lie in his criticisms of liberal animal-rights discourse as it is put forward by scholars like Tom Regan. However, I argue that, by now, Benton’s interpretation of the Manuscripts has become an obstacle to the further investigation of Marx’s legacy.

Second, contrary to what Benton says, I tried to show how a different reading of the Manuscripts could pave the way for a fruitful alternative adaption of Marx’s original writing. The point here is to acknowledge Marx’s early combination of a historical-materialist, socio-practical framework and an analysis of political economy. Marx’s approach differs from an exclusively philosophical reading aimed at defining human nature or a philosophical anthropology. In this vein, the core problem for humans and animals becomes clear in the Manuscripts—the capitalist social relations that Marx discusses as alienated labor. But Marx also outlines how to get rid of it: by a rational design of these relations that considers the needs of animals and the reproductive requirements of nature. This includes the self-realization of humans as natural and social beings, enabled by their special species character, their species being. A rational design of the societal relationship to nature has the potential to allow humans to understand, among other things, that special capabilities can sometimes lead to backing off in a relationship and letting others, such as nonhuman animals and natural systems, flourish. Furthermore, my reading of the Manuscripts shows that Marx’s differentiation between humans and animals is in no way dualist but dialectical. He conceptualizes the qualitative difference between animals and humans as the outcome of the species-specific historical and social labor within a social-natural unity. This means, in contrast to Benton’s assumption, that there is neither a humanist nor a naturalist Marx in the Manuscripts. There is just one Marx who is capable of providing human-animal scholars with a sustainable concept of the human-animal differentiation that stands in contrast to the dualist Western philosophical tradition.

In contrast to Benton’s analysis, I think that Marx’s notion of alienation has the potential to analyze and criticize what is done to animals under capitalism. By developing the idea—even in an early form—with respect to humans, Marx provides us with the instruments to conceptualize, analyze, and criticize animal alienation. However, it is necessary to acknowledge the differences between (1) human capitalist alienation and its modus operandi and (2) animal alienation and its specific form.

Regarding Marx’s idea of historical liberation, Benton rejects my critique and says that he did not accuse Marx of a “Promethean advocacy of domination of nature.” He writes that, in this case, Marx “abandons the recognition of the transhistorical dependence of humans on nature that is asserted elsewhere in the Manuscripts.” But if Marx denies the dependency of humans on nature, would that not be a prime example of Prometheanism?

Furthermore, in my opinion, Benton proceeds here in the same way as he does with the human-animal differentiation. Marx elaborates that a relative independence of humans from nature, as well as humans realizing themselves by social labor and their unity with nature, are parts of a historically unfolding dialectical relation. But Benton once again splits up Marx’s argument into two presumably contradictory lines. Here, I insist that either one recognizes Marx’s dialectical understanding of the human-nature relationship or one suggests that Marx argues, at least partially, in a Promethean way. To assume that Marx at least partly denies human dependency on nature without accusing him of Prometheanism is impossible.

In the end, the dispute is now open to the public and I hope that Foster and Clark’s and my interventions at least lead to serious doubts among activists and young scholars regarding Marx’s presumed species narcissism and anthropocentrism. The pro-animal activists, movements, and the animals within our capitalist societies are the ones that may benefit from a long overdue fusion between classical Marxism and animal liberation.