Dear Reader, we make this and other articles available for free online to serve those unable to afford or access the print edition of Monthly Review. If you read the magazine online and can afford a print subscription, we hope you will consider purchasing one. Please visit the MR store for subscription options. Thank you very much. —Eds.
Notes from the Editors
by The Editors
(May 01, 2019)
Topics: History Places: Americas United States 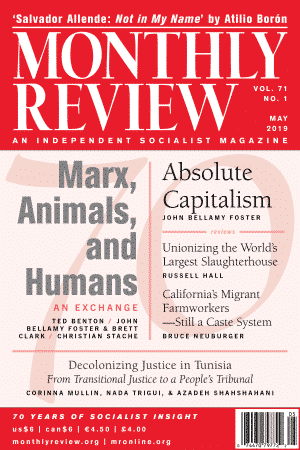 Monthly Review: An Independent Socialist Magazine is now seventy years old. Its first issue appeared in May 1949. In all, 778 issues of the magazine have been published, including the present one. (At first, twelve issues were published per year. That changed in volume 8, when an annual double issue was introduced in the summer. Ever since, there have been eleven issues per year.)

Leo Huberman and Paul M. Sweezy, the original founding editors of the magazine, coedited MR until November 1968, when Huberman died. In May 1969, Harry Magdoff officially joined Sweezy as coeditor. However, it was not until almost three decades later that there was a shift in the editorship of the magazine from the 1930s to the 1960s generation, with Ellen Meiksins Wood (1997–2000), Robert W. McChesney (2000–2004), and John Bellamy Foster (2000–present) joining Magdoff and Sweezy as coeditors.

Since 2000, MR has relied, to a greater degree than before, on an informal editorial committee. Michael D. Yates served as associate editor until 2018 (when he left to concentrate on his role as director of Monthly Review Press), after which Brett Clark took on the role. In addition to Clark, others in a younger generation of socialist intellectuals have come to play leading roles, including Hannah Holleman and Intan Suwandi on the editorial side of the magazine, while R. Jamil Jonna has assumed the role of associate editor for production and communications (including directing MR‘s social media). These new, younger members of the MR editorial group have joined with Foster and Monthly Review Foundation directors John Mage and John J. Simon in guiding the magazine editorially. Other directors of the Monthly Review Foundation at present include Bernardine Dohrn, Fred Magdoff, McChesney, Al Ruben, and Martha Sweezy. In addition, Victor Wallis regularly provides his inestimable help to the editorial committee. Camila Valle is assistant editor, Martin Paddio is business manager, and Gordon Beeferman, circulation manager. Susie Day is in charge of marketing.

This is, in one sense, who we are. But in a wider sense, there are a large number of individuals who belong to what we like to think of as the MR family. This includes those who write for the magazine, supporters of MR through the Monthly Review Foundation, and others who interact with us in various ways. It also includes MR‘s readers themselves. The MR family thus consists of many thousands of people worldwide who identify with MR and have helped make it what it is today. Without them we would not exist.

But what is it that constitutes the MR tradition, apart from the people who make it up? Is there, as is often said, a “Monthly Review School”? It is not possible in the brief space available here to answer these questions completely or to summarize the history of the magazine over the last seventy years. What we can do, though, is say a few words about MR‘s evolution and what it means to us today.

MR was launched as an act of socialist defiance in one of the worst periods for the left in the United States: the beginning of Cold War McCarthyism, brought on in large part by Harry S. Truman and his redbaiting of the entire political movement in support of the Henry Wallace campaign for the presidency. With the left under attack, Huberman and Sweezy chose to resist by establishing MR, with Albert Einstein writing his “Why Socialism?” for the first issue. The early issues of the magazine focused on “Cooperation on the Left.” But the magazine quickly arrived at the conclusion, presented by Paul A. Baran in his “Better Smaller but Better” (July 1950—derived from a slogan used by V. I. Lenin in his last struggles), that, with the left pulverized as it was and with the movement’s connection to the masses destroyed by McCarthyism, there was in reality “no politics of the left” in the United States. Under these circumstances, MR‘s role became one of carrying out a holding action while developing left analyses for such a time when the socialist movement would be able to rebuild. This meant both an emphasis on self-clarity and a deepening of the critique of the system, reminiscent of “what Marx used to call Selbstverständigung [self-understanding].”

The resistance of the MR editors to the system did not go unnoticed and both Huberman and Sweezy (as well as Magdoff independently of MR) were brought before McCarthyite committees. So repressive was the climate that in the September 1949 issue of MR, all of the authors other than the editors—”a British Socialist,” “Historicus” (the pseudonym used by Baran), and “an Economist”—chose not to reveal their names. In 1952, Monthly Review Press was started when I. F. Stone could not find a publisher in the United States willing to bring out his A Hidden History of the Korean War.

With socialist politics repressed in the United States, MR became internationalist by necessity, as well as by conviction. The magazine took a critical stance toward the devolution of Soviet-type societies, while anchoring itself politically in ongoing third world revolutions. Huberman and Sweezy wrote about the impending victory of the Chinese Revolution in the very first issue of the magazine. Baran’s The Political Economy of Growth (1957) was to play a major role in the development of anti-imperialist dependency theory. Huberman and Sweezy traveled to Cuba shortly after the 1959 Cuban Revolution and wrote their influential Cuba: Anatomy of a Revolution (1960). MR became famous for analyses of monopoly capitalism and imperialism, as represented by such works as Baran and Sweezy’s Monopoly Capital (1966), Andre Gunder Frank’s Capitalism and Underdevelopment in Latin America (1967), Magdoff’s The Age of Imperialism (1969), Eduardo Galeano’s Open Veins of Latin America (1973), and Harry Braverman’s Labor and Monopoly Capital (1974). Bill Hinton’s books, beginning with Fanshen: A Documentary of Revolution in a Chinese Village (1966), brought readers a deep understanding of the Chinese Revolution, with all its twists and turns. MR was widely read by those participating in liberation struggles all over the world. Che Guevara, who was a close friend of the MR editors, provided a number of pieces for the magazine and allowed Monthly Review Press to publish his Guerrilla Warfare. MR also played an important role with respect to race and gender struggles, publishing such important contributors as W. E. B. Du Bois, Oliver Cromwell Cox, Malcolm X, Lorraine Hansberry, James Boggs, Grace Lee Boggs, Margaret Benston, and the Combahee River Collective.

In “The Old Left and the New,” in May 1969, celebrating the twentieth anniversary of the magazine, Magdoff and Sweezy pointed to a shift in U.S. politics and in MR‘s intellectual position, reflecting a new period of radical politics. The New Left that emerged in the 1960s, they argued, had grown out of the contradictions of capitalism—and out of the struggles of blacks and Latinos, the student-led antiwar movement, and the wider cultural struggles associated with the Students for a Democratic Society—and was far more revolutionary in its perspective than the U.S. Old Left, which, despite various radical pronouncements, had been largely reformist. Nevertheless, the situation in the United States was such that the bulk of the working class, as Baran had argued in the 1950s, remained thoroughly enmeshed in the system. As a result, MR‘s task remained the same: not to seek to water down its views or to compromise with liberals in order to seek a larger audience, but rather to continue to build on the strategy of Better Smaller but Better. At the same time, it was recognized that the New Left was heavily based in the academic world, due to the political opening up of this sphere as a result of radical struggles, and this required a shift in the magazine, which increasingly took on the role of interfacing between academics and activists.

Twenty years later, in a statement given at the Fortieth Anniversary Celebration for MR in May 1989 (parts of which had appeared in the January 1989 Notes from the Editors), Sweezy once more took up the issue of “Where We Stand.” Here he reiterated that the crucial conclusions of Baran in 1950 still held:

Not only is there no socialism in the visible future of U.S. society, there isn’t even a coherent socialist movement here. For us, Marx’s project, the ruthless critique of capitalism, remains at the top of the agenda. No doubt the seeds of socialism have been planted here, but they are slow to germinate, and no one can yet foresee the date or manner of their sprouting and growth. To study these phenomena it is still necessary to look elsewhere.

The year 1989 was a watershed moment for the world. James Hansen’s famous 1988 testimony to the U.S. Congress on the reality of climate change, followed by the formation of the United Nations Intergovernmental Panel on Climate Change, led to MR placing the environment at the top of its agenda, as marked by Sweezy’s “Capitalism and the Environment” (June 1989). The fall of the Berlin Wall that same year spelled the beginning of the demolition of Soviet-type societies. The crushing of the Caracazo protests in Venezuela in February 1989 led to the rise of Hugo Chávez and the movement, beginning in Venezuela, for a socialism for the twenty-first century.

In this century, MR has been dedicated increasingly to the analysis of the ecological crisis, in addition to its traditional inquiries into the crises of monopoly capitalism and imperialism. It has sought to promote a new socialism for the twenty-first century and a critique of the new imperialism. Today, with the very existence of humanity at stake, there is no question that revolutionary solutions are needed, which can only come from a reinvigorated socialism, committed to democratic mass action, and the merging of movements for substantive equality throughout the planet.

Fortunately, in the United States there are now the first signs in many years of a mass growth of socialism, particularly among younger generations, though manifesting itself largely in the form of a reformist social democracy. Nevertheless, anticapitalism and interest in socialism are real and potentially revolutionary in character. What is required in these circumstances is a movement toward socialism geared to a long ecological and social revolution—embodying a struggle massive and effective enough to guarantee, in the present, humanity’s future development. MR will not altogether abandon its strategy of Better Smaller but Better. But in the face of the current planetary emergency, the time for a mere holding action is over. Today, where we march is where we stand.