Dear Reader, we make this and other articles available for free online to serve those unable to afford or access the print edition of Monthly Review. If you read the magazine online and can afford a print subscription, we hope you will consider purchasing one. Please visit the MR store for subscription options. Thank you very much. —Eds.
Notes from the Editors
by The Editors
(Jun 01, 2019)
Topics: Imperialism War Places: Venezuela 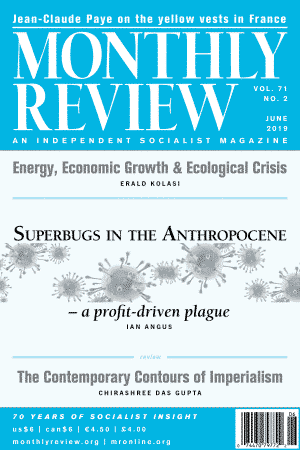 As we write this in mid–April 2019, the situation in Venezuela has become extremely dire due to Washington’s heightened economic warfare, its continuing attempts to engineer a political coup, and its growing threats of massive military intervention—all aimed at bringing down the Bolivarian Republic. The recent seizure of Venezuelan oil assets in the United States and its gold reserves in British banks, as well as the sanctioning of Venezuelan oil sales, have come on top of a long series of economic sanctions—beginning with the Obama administration and now intensified under Trump’s—that constitute nothing less than a modern form of siege warfare, extended to food supplies and medicine. There is now considerable evidence that U.S. intelligence agencies planned and implemented a series of cyberattacks on the Venezuelan electrical system, occurring over a period of weeks. It is currently believed, as a result of Russian investigations, that the cyberattack employed Duqu 2.0, an improved version of the Stuxnet virus previously used against Iranian nuclear facilities (Alfredo Hurtado, “Duqu 2.0, Lead Actor on Electric Cyber-Attacks Against Venezuela,” Orinoco Tribune, April 17, 2019). In all of these acts of war and terror, the United States has been supported by its North Atlantic Treaty Organization allies and by right-wing governments in Latin America, including that of Brazil under the neofascist Jair Bolsonaro.

How has Venezuela’s Bolivarian Republic managed to survive in the face of these growing attacks by the United States? Surely, few individuals would have thought that the Chavistas could hold out as long and as well as they have against the unceasing pounding they have received from the United States. One answer is that Washington has not succeeded in completely isolating Venezuela, as witnessed by the support offered to the Bolivarian Republic by Russia and China. Following the attacks on the Venezuelan electrical system, China quickly offered to help restore Venezuela’s electricity and presumably to defend it against such future attacks. Both Russia and China each sent around one hundred troops to Venezuela in April. The main Russian military mission was ostensibly to help with a helicopter base; the mission of the Chinese troops is still unknown. But the mere presence of troops from these countries in Venezuela represents a warning against U.S. attempts to engineer a military intervention or to continue its cyberattacks.

But the real answers as to why the Venezuelan Revolution has managed to resist in the face of the economic and political warfare of the most powerful imperialist nation in the world are to be found in the nature of the Bolivarian Revolution and the Venezuelan people themselves. The Venezuelan Revolution was, from the beginning, directed at enhancing popular power, building the notion of protagonism into the new Bolivarian Constitution. As Hugo Chávez turned toward a concept of socialism for the twenty-first century, he relied heavily for inspiration and guidance on István Mészáros’s work, particularly the chapter of Beyond Capital on “The Communal System and the Law of Value” (István Mészáros, Beyond Capital [New York: Monthly Review Press, 1995], 739–70). A consequence of this was that Chávez, far from trying to restrain spontaneous collectives from arising within the revolutionary process, sought to use the state as a mechanism for strengthening these same popular initiatives through the creation of a communal state, facilitated by the Organic Laws of Popular Power passed in 2010, including, most notably, the Organic Law of the Communes and the Organic Law of the Communal Economic System.

The strategy was one of consciously devolving power to the people, rooted in communal councils and communes, so as to enhance enormously the field of productive activities of the people (in Mészáros’s conception), creating an alternative system of social metabolic reproduction outside strictly market relations.

In the communes, residents in geographical areas smaller than a city unite in a number of communal councils [groupings of families involved in self-governance projects—in densely populated urban areas, two hundred to four hundred families; in rural areas, fifty to one hundred families] with the object of self-governance through a communal parliament, constructed on participatory principles. The communes are political-economic-cultural structures engaged in such areas as food production, food security, housing, communications, culture, communal exchange, community banking, and justice systems. (John Bellamy Foster, “Chávez and the Communal State,” Monthly Review 66, no. 11 [April 2015]: 1)

This devolution of power, reinforced by the state and frequently undercutting municipalities controlled by propertied interests, gave popular communities unprecedented control over their own lives, making the communes “the main form of democratic community organizing across the country” (Federico Fuentes, “Who Are Venezuela’s Colectivos?,” Green Left Weekly, April 12, 2019). For Mészáros and for Chávez, this was seen as a means of making the revolution “irreversible”—it had so altered the constitutive cells of society, enhancing the daily existence of the people, that they would defend the revolution with their lives (István Mészáros, The Challenge and Burden of Historical Time [New York: Monthly Review Press, 2008], 251–53). In his last great speech, “Strike at the Helm,” on October 7, 2012 (available at monthlyreview.org), Chávez insisted that the full development of the communes, the ground for which had then been prepared, was the most urgent task in order to extend and make irreversible the Bolivarian Revolution. Under Nicolás Maduro, this collective, popular power of the revolution and the development of the communes were carried forward.

It is no accident, therefore, that the organized resistance of the Bolivarian Revolution to U.S. economic warfare and coup attempts has been based in the communes and collectives. The importance of the Venezuelan collectives has led U.S. Senator Marco Rubio (R–Florida), a major backer of the attempted coup, to demand on April 5 that Venezuela’s numerous collectives along with the Venezuelan state itself be put on the international terrorism list. As Venezuelan Gustavo Borges declared in response, “it will be long the list that Marco Rubio, the State Department and the Treasury Department of his country will have to draw up in order to include Chavismo among the so-called ‘terrorist organizations’ because over here we are all a collective” (Gustavo Borges, “A Chronicle to Define What Collectives Are in Venezuela,” Misión Verdad, April 8, 2019). Crucial to the defense of the Bolivarian Republic, in fact, is the civic-military union of the people. In Venezuela, two million people, based in the collectives, are now armed and organized in militias (a process that went back to Chávez), and the number is expected soon to rise to three million. The population itself is ready to defend their revolution against any invader. With respect to Venezuela, as Pascualina Curcio, one of the leading analysts of the strategic situation in the country, has stated: “Imperialism does not understand the resistance of the Venezuelan people” (Carlos Aznarez, “Pascualina Curcio: ‘Imperialism Does Not Understand the Resistance of the Venezuelan People,’” Internationalist 360º, April 15, 2019).

MR readers will be interested to know that the long-awaited second volume of Samir Amin’s autobiography has just been published by Monthly Review Press, titled The Long Revolution of the Global South. In addition to recounting much of Amin’s own recent history, it is one of the most trenchant assessments of imperialism in our day.

On April 13, MR held a panel on “Capitalism Has Failed: Disowning the System” at the Historical Materialism Conference in New York. Panel members included Bernardine Dohrn, John Bellamy Foster, Hannah Holleman, and Fred Magdoff, with John Mage acting as the chair. (Camila Valle, MR‘s assistant editor, was one of the organizers of the conference.) We were pleased by the warm reception of the audience and the strong conviction voiced by nearly everyone we talked to that we are at a turning point in the global struggle, not only with respect to the economy and the environment, but also struggles over imperialism, racial capitalism, and social reproduction. All of these themes will be emphasized in the magazine in issues coming out over the remainder of this year, recognizing the growing unification of left struggles.

MR and Monthly Review Press author James D. Cockcroft died on April 17, age 83. Cockcroft, who received his PhD from Stanford, with Marxist economist Paul A. Baran on his doctoral committee, wrote extensively on Latin America and other topics. He was a major contributor to dependency theory and wrote fifty books in all. For Monthly Review Press, he wrote a trio of books on Mexico: Mexico: Class Formation, Capital Accumulation and the State (1990), Mexico’s Hope (1998), and Mexico’s Revolution Then and Now (2010). As Robert F. Freeland wrote on the Marxist Sociology discussion listserve on April 20: “Up to the time of his death Jim was overwhelmed with requests to speak all over Latin America, where he is known as the North American who understands and supports the struggles of peoples against American imperialism, or perhaps as the gringo who loves us.”