Dear Reader, we make this and other articles available for free online to serve those unable to afford or access the print edition of Monthly Review. If you read the magazine online and can afford a print subscription, we hope you will consider purchasing one. Please visit the MR store for subscription options. Thank you very much. —Eds.
by Samir Amin and Firoze Manji
(Jul 01, 2019)
Topics: Imperialism Labor Movements Places: Global 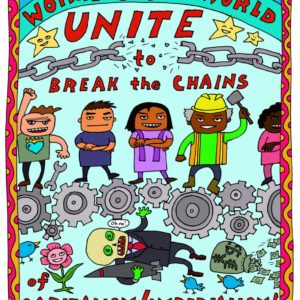 Samir Amin (1931–2018) was director of the Third World Forum in Dakar, Senegal, and the author of many books. Firoze Manji is the founder and former editor of Pambazuka News and Pambazuka Press. He set up Daraja Press and is currently a member of its governing collective. He is Adjunct Professor of African Studies at Carleton University, Ottawa, Canada.

Shortly before his death on August 12, 2018, Samir Amin, working together with Firoze Manji, prepared a document he hoped would be widely circulated. His aim was to initiate the building of a transnational alliance that was both radical and enabled a diversity of perspectives. Amin’s friends have commenced an international conversation to that end. With the intent of furthering that nascent project, and in boundless appreciation of his invaluable contributions to Monthly Review over many decades, we present the last written words of our comrade Samir Amin.

For the last thirty years, the world system has undergone an extreme centralization of power in all its dimensions—local and international, economic and military, social and cultural.

Some thousand giant corporations and some hundreds of financial institutions, which have formed cartels among themselves, have reduced national and globalized production systems to the status of subcontractors. In this way, the financial oligarchies appropriate a growing share of the profits from labor and from companies that have been transformed into rent producers for their own exclusive benefit.

Having domesticated the main right-wing and left-wing parties, as well as the unions and organizations of so-called civil society, these oligarchies now also exercise absolute political power. They exercise power over the media that is subordinated to them, creating the necessary disinformation to depoliticize public opinion. The oligarchies have annihilated the traditional practice of multipartyism, virtually replacing it with a one-party system controlled by capital. Representative democracy, having lost all its meaning, has also lost its legitimacy.

Late contemporary capitalism, which has become a completely closed system, matches all the criteria of totalitarianism, although care is taken not to name it as such. This totalitarianism is still soft but is always ready to resort to extreme violence as soon as the victims—the majority of workers and oppressed peoples—begin to revolt. All changes that are part of this so-called modernization must be seen in light of the foregoing analysis. Thus, we face major ecological challenges (especially climate change) that capitalism is incapable of resolving (the Paris agreement of December 2015 was only a smokescreen). We are witnessing scientific developments and technological innovations, including information technology, rigorously subjected to the requirements of the financial profit they can make for the monopolies. The glorification of competitiveness and the freedom of the market, which the subservient media present as guarantees of the freedom and efficiency of civil society, are in fact antitheses of the actual situation, which is riven by violent conflicts between fractions of the existing oligarchies and is the cause of the destructive effects of their governance.

Contemporary capitalism always follows the same imperialist logic of globalization that has been its characteristic since its origins (the colonization of the nineteenth century was clearly a form of globalization). Contemporary globalization does not escape this logic; it is nothing other than a new form of imperialist globalization. This term, globalization, so often used without any definition, hides an important fact: the deployment of systematic strategies developed by the historical imperialist powers (the United States, Western and Central European countries, and Japan, which we shall call the triad) that continue to pillage the resources of the global South and carry out the superexploitation of labor that is associated with delocalization and subcontracting. These powers intend to maintain their historical privilege and to prevent all other nations from extricating themselves from the status of dominated peripheries. The history of the last century was in fact a history of the revolt of the peoples of the peripheries of the world system who were engaged in either a socialist delinking from capital or in attenuated forms of national liberation. The pages of that history have, for the moment, been turned. The current process of recolonization has no legitimacy and is therefore fragile.

For this reason, the historical imperialist powers of the triad have set up a system of collective military control over the planet, directed by the United States. Membership of the North Atlantic Treaty Organization (which is inextricably linked to the construction of Europe) and the militarization of Japan reflect the requirement of this new collective imperialism that has taken over the national imperialisms (of the United States, Great Britain, Japan, Germany, France, and a few others) that were formerly in permanent and violent conflict.

In these circumstances, constructing a transnational alliance of workers and oppressed peoples of the entire world has to be the main objective of the struggle to counteract the spread of contemporary imperialist capitalism.

Confronted by this tremendous challenge, the inadequacy of the struggles being carried out by the victims of the system is all too apparent. The weaknesses of these struggles are of different kinds, which we would classify under the following headings:

In the North, the central theme of anticapitalist class struggle has been abandoned by the left or reduced to a supposed new definition of the left wing defined by partner culture or communitarianism, separating the defense of specific rights from the general fight against capitalism.

In certain countries of the South, the tradition of struggles that associated the anti-imperialist struggle with social progress has given way to reactionary backward-looking illusions expressed by religions or pseudoethics. In other countries of the South, the successful acceleration of economic growth over the last decades feeds the illusion that it is possible to construct a developed national capitalism capable of imposing its active participation in shaping globalization.

The power of the oligarchies of contemporary imperialism appears to be indestructible in the countries of the triad and even at the world level (“the end of history”!). Public opinion subscribes to its disguise of market democracy, preferring it to its past adversary—socialism—which is invariably embellished with such odious sobriquets as criminal, nationalist, or totalitarian autocracies.

However, this system is not viable for many reasons:

We are now in the phase of the autumn of capitalism, without this being strengthened by the emergence of a springtime of peoples and a socialist perspective. The possibility of substantial progressive reforms of capitalism in its current stage is only an illusion. There is no alternative other than that enabled by a renewal of an international radical left, capable of carrying out—and not just imagining—socialist advances. It is necessary to end crisis-ridden capitalism rather than to try to end the crisis of capitalism.

Based on the first of the four hypotheses above, nothing decisive will affect the attachment of the peoples of the triad to their imperialist option, especially in Europe. The victims of the system will remain incapable of conceiving their way out of the path traced by the European project, one that has to be deconstructed before it can then be reconstructed with another vision. The experiences of Syriza in Greece, Podemos in Spain, and Insoumise in France, the hesitations of the German Die Linke, and others all testify to the extent and complexity of the challenge. The facile accusation of nationalism against those critical of Europe does not hold water. The European project is increasingly visible as being that of the bourgeois nationalism of Germany. There is no alternative in Europe, as elsewhere, to the setting up of national, popular, and democratic projects (not bourgeois, indeed antibourgeois) that will begin the delinking from imperialist globalization. It is necessary to deconstruct the extreme centralization of wealth and the power that is associated with the system.

According to this hypothesis, the most probable outcome will be a remake of the twentieth century: advances made exclusively in some of the peripheries of the system. But these advances will remain fragile, as have those of the past, and for the same reason—the permanent warfare waged against them by the imperialist power centers, the success of which is greatly due to their own limits and deviations. The hypothesis of a workers and peoples’ internationalism opens up ways to further evolutions that are necessary and possible.

The first of these ways is that of relying on the “decadence of civilization.” In this case, the paths forward are not to be masterminded by anyone, rather their trails must be blazed in response to the conditions imposed by the evolving situation of decay. However, in our epoch, given the power of ecological and military destruction and the disposition of the powerful to use such powers, the risk, denounced by Karl Marx in his time, is that there is a very real possibility that the fighting will destroy all the camps that oppose each other.

The second path, by contrast, will require the lucid and organized intervention of the international front of workers and all oppressed peoples.

Creating a new transnational alliance of workers and oppressed peoples must be the main objective for the genuine militants who are convinced of the odious nature of the world imperialist capitalist system that we have at present. It is a heavy responsibility and the task requires several years before reaping any tangible results.

As for ourselves, we put forward the following proposals:

We shall therefore suggest organizing a meeting with a view to creating the new transnational alliance of workers and oppressed peoples. Each region should be represented by activists known and respected in their regions for their commitment to the defense of peoples’ interests, against the aggressions of capitalism, delegated if possible by their own organizations. Voices of communities in conflict with the state to which they belong, as well as communities with no state, should also be represented. Therefore, in contrast with previous Internationals, each country will be represented by several organizations, not a single one, in keeping with the respect of diversity, provided that all recognize that what unites us is more important than what divides us. Finally, the meeting should also help identify a first set of common targets for the struggles in the long run as well as for the immediate future.

Comrades, we call on your sense of historical responsibility. This meeting could help identify the conditions for achieving new revolutionary socialist advances (taking stock of the lessons of past revolutions). In the absence of such progress, the world will continue to be ruled by chaos, barbarian practices, and the destruction of the earth.

View all posts by Samir Amin →