Dear Reader, we make this and other articles available for free online to serve those unable to afford or access the print edition of Monthly Review. If you read the magazine online and can afford a print subscription, we hope you will consider purchasing one. Please visit the MR store for subscription options. Thank you very much. —Eds.
by Silvia Federici
(Sep 01, 2019)
Topics: Feminism Marxism Political Economy Places: Americas United States 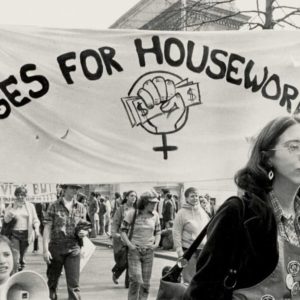 Silvia Federici was a cofounder of the International Wages for Housework Campaign, as well as the Committee for Academic Freedom in Africa and the Radical Philosophers’ Anti-Death Penalty Project. She is Professor Emerita at Hofstra University and the author of many books and essays on women’s history, feminist theory, political philosophy, and education. Her most recent book is Witches, Witch-Hunting, and Women (Oakland: PM, 2018).

Published in the September 1969 issue of Monthly Review, Margaret Benston’s “The Political Economy of Women’s Liberation” is a remarkable essay from many points of view. The first reason is the identity of the author and the social context of its production. As a professor of chemistry and computing science, and a prolific writer in these fields, Benston was an unlikely contributor to radical discourse. That she could competently teach chemistry, discuss infrared spectroscopy or “the new force theorem,” and, in addition, write feminist theory demonstrates not only her exceptional versatility but also the revolutionary character of the times and its effect on the academic world in North America.1

“The Political Economy of Women’s Liberation” is also extraordinary as reputedly one of the first attempts to place the politics of women’s liberation within an anticapitalist framework and to identify domestic labor as the material basis of women’s structural relation to capitalist production and their subordination in society. Though Benston’s approach to this task was often reductive and contradictory, the questions she raised—about the nature of reproductive work, the extent to which it contributes to the particular forms of oppression women suffer in capitalist society, how it should be reorganized, and so on—contributed to a shift in the terms of the feminist debate and remain significant in today’s feminist politics, despite the changes in the organization of this work since the time of her writing. Thus, rethinking the contribution of “The Political Economy of Women’s Liberation” to feminist theory, more than an exposition of Benston’s work and a homage to her, must be a reflection on the lessons we can learn from it today, at a time when new feminist movements are rising again globally, including in the United States.

As it has often been observed, prior to the publication of “The Political Economy of Women’s Liberation,” feminist discourse—with the exception of Juliet Mitchell’s “Women: The Longest Revolution”—had centered on the origins and workings of patriarchal rule, as expressed in familial, sexual, gender relations and the experiential knowledge generated by consciousness-raising groups.2 The power of feminism in its initial phase lay precisely in its politicization of a sphere of relations, such as procreation and sexuality, traditionally ignored by both left and liberal intellectuals and generally considered alien to the domain of traditional (waged) work. Moreover, to the extent that feminist critiques of male dominance moved within an antisystemic perspective, the first point of reference for the feminist movement was anarchism, which fit both with the antiauthoritarian sentiment of the time and the feminist distrust of political parties and hierarchical relations. By the 1960s, Marxist thinking in North America had lost much of its appeal, stifled by Joseph McCarthy’s terror campaign and the politics of the bureaucratic Communist Party (CPUSA) that were clearly out of step with the needs of the insurgent movements of the time. In the 1940s in the United States, new voices—coming from young women workers joining the industrial workforce in California—attempted to steer the CPUSA in a feminist direction. In a pathbreaking work, In Woman’s Defense, Mary Inman, a party member, challenged the orthodox socialist view of the factory as the unique center of capitalist production, arguing that workers’ wives were as much part of the production process in steel, automobile, and oil plants as their husbands.3 But such a view had been so adamantly rejected by the party that Inman was forced to leave.4

Viewed against this background, Benston’s intervention appears as both a return to the past and, at the same time, if not a “watershed,” as described by Peter Custers, certainly a new turn.5 On the one hand, she reiterated the classic Marxist-Leninist argument, recuperated through Ernest Mandel, concerning the precapitalist, premarket character of domestic work.6 On the other, she so strongly insisted on the importance of this work for the stability and perpetuation of the capitalist system that she not only anticipated some of the theses later argued by theorists in the Wages for Housework Campaign, but often fell into apparent contradictions.7

Her initial description of housework as a premarket, precapitalist activity, only producing use values, presumably for the exclusive benefit of workers’ families and their communities, in fact counters subsequent statements made in the article. The effect is that this is a nonmarginal, socially necessary, and profitable (for the capitalists) form of labor that also disciplines wage workers, keeping them dependent on capital and tied to their jobs.8

At no point in “The Political Economy of Women’s Liberation” does Benston suggest that what women produce in the home are not quickly consumed products, but labor power—that is, that housework is a central element of the reproduction of the workforce and, as such, an essential condition of capitalist production. Nor does she ask why capitalism, which throughout its history has revolutionized all social relations, would allow billions of hours of noncapitalist work if it did not extract from it surplus labor. As Lise Vogel and Peggy Morton have pointed out, Benston also underestimated the importance of women’s extradomestic work and, I would add, the capacity of the capitalist system constantly to revolutionize the composition of the waged workforce as it has done in its present phase of development.9

It is plausibly because of such oversights that (as Morton has observed), Benston “does not provide any basis on which [a] strategy for a women’s movement [could] be based” and the change she advocated—the deprivatization of domestic work, its industrialization and organization as a public form of production—could be realized.10 But her enduring contribution to feminist politics is to have placed the question of domestic work at the center of feminist theory, especially at a time when the energies of the movement were increasingly being directed to gaining equality with men and the so-called right to work.

“The Political Economy of Women’s Liberation” addressed the housework question methodologically, but did not solve it politically. This was also the fate of the debate concerning the nature and place of housework in capitalism that the article generated and which, in the end, turned into a sterile academic exercise with little relation to the social struggles of the time.

While academic feminists debated the question of productive versus unproductive labor, a welfare mothers’ movement was struggling in the streets of the United States against a vicious institutional attack portraying mothers, particularly black mothers, who received federal subsidies as social parasites, fraudulently living at the expense of the working class.11 It is a matter of speculation whether this highly racialized warfare, on a movement that was led by black women, might have been blocked had it been countered by a feminist mobilization supporting the mothers’ claims that raising children is socially necessary work and every mother is a working woman.12 We can further wonder if a feminist movement more appreciative of the importance of reproductive work, both for the reproduction of our life and the reproduction of the workforce, and capable, therefore, of taking advantage of capital’s dependence on it, may have succeeded in combating the neoliberal disinvestment in social reproduction, the consequences of which have been devastating for our communities.

As it were, these were paths that, with few exceptions, feminists did not take.13 Benston too, while identifying housework as the defining relation of women to capitalism and thereby the main terrain of feminist struggle, did not believe that houseworkers could organize around their work, as she described them as passive, conservative, and fearful of change.14

It is to her credit, however, that she did not see the recruitment of women into wage labor as a sufficient condition of women’s supposed emancipation. The developments that have occurred over the last four decades, following the restructuring of the global economy and the global division of reproductive work, have fully supported her view. The massive entrance of women into wage labor has by no means afforded the majority the economic autonomy and social empowerment that feminists expected. Burdened with an irreducible daily quota of housework and employed in labor-intensive, low-paid jobs with no benefits or paid vacations that are mostly extensions of work in the home (such as nursing and teaching kindergarten through twelfth grade), most women today are experiencing a deep life crisis, as are their communities since the work devoted to their reproduction has been significantly curtailed.

Benston anticipated these developments, but her inability to see the social subjects that would revolutionize the conditions of housework and force its recognition as real work, as welfare mothers attempted to do, prevented her from translating her insights into a program for action.

This is a lesson we need to heed, especially as new theories of social reproduction are being developed that again strive to demonstrate the nonproductivity of housework.

The fact that after so many disputations, already in the 1970s, the questioning of housework’s productivity continues to be an open problem raises important questions. The importance of this argument for Marxists is something that needs to be explored, although it falls outside the purpose of this article. Suffice it to say that it clearly stems from political considerations unrelated to the technicalities of Marx’s definition of productive work, which in the context of a globalized economy is becoming more irrelevant every day. Of one thing, however, we can be sure. Denying that domestic work is socially productive—that is, denying that those who perform this work contribute to the production of capitalist wealth—can only weaken the struggles of these workers to reclaim, in any form, the wealth their work has produced.15

View all posts by Silvia Federici →