Dear Reader, we make this and other articles available for free online to serve those unable to afford or access the print edition of Monthly Review. If you read the magazine online and can afford a print subscription, we hope you will consider purchasing one. Please visit the MR store for subscription options. Thank you very much. —Eds.
Notes from the Editors
by The Editors
(Sep 01, 2019)
Topics: Feminism History Marxism Political Economy Places: Global 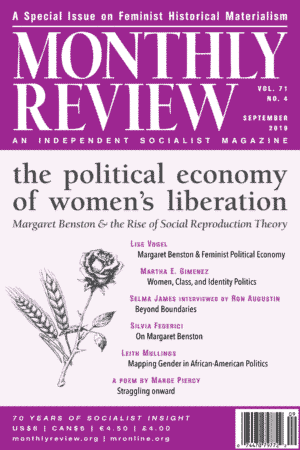 Margaret Benston’s publication fifty years ago of “The Political Economy of Women’s Liberation,” commemorated in the present issue of Monthly Review, sparked a revolution in Marxian thought, generating a new feminist historical materialism, the full implications of which are only now being perceived in contemporary social reproduction theory. All the contributors (except Ron Augustin) to the present issue played vital roles in this theoretical revolution.

One of the most important figures in the new way of thinking in the 1970s and 1980s was Selma James (see the interview with her by Augustin in this issue, in which she also discusses her relation to C. L. R. James). James’s Marx and Feminism, based on her 1983 speech (first published in 1984, later republished by various outlets, and revised as a pamphlet in 1994), deserves to be considered one of the great feminist contributions to Marxist thought. One passage in particular captures in just a few words the full force of the epistemological break that, in our view, represented not so much a rupture with Marxism as its necessary extension:

In 1969 and 1970, reading in Volume 1 of Capital all about the uniquely capitalist commodity labour power, I realized that this was the special commodity which housework produced. Being ignorant, I thought everybody knew and I was angry that they had neglected to tell us. It was a surprise to find that the obvious view—that women were the producers of everyone’s labour power, everyone’s ability to work and to be exploited—was new. In the course of setting out the implications of this (and in the process of shocking some well-meaning Left-wing people out of their political minds), I tried to describe the work which produced and reproduced labour-power, the general sale of which defines a society as capitalist:

This is a strange commodity for it is not a thing. The ability to labour resides only in a human being whose life is consumed in the process of producing. First it must be nine months in the womb, must be fed, clothed, trained. Then when it works, its bed must be made, its floors swept, its lunchbox prepared, its sexuality not gratified but quietened, its dinner ready when it gets home even if this is eight in the morning from the night shift. This is how labour power is produced and reproduced when it is daily consumed in the factory or the office. To describe its basic production and reproduction is to describe women’s work. (Selma James, introduction to The Power of Women and the Subversion of the Community, by Mariarosa Dalla Costa and Selma James, 3rd ed. [Bristol: Falling Wall, 1975], 11)

I invented the word “unwaged” to describe this “women’s work,” this housework. Although we got no wage for doing it, it wasn’t entirely unpaid—remember? For some we are paid in the form of food, clothing and shelter. But we get no money in our own right for expending our labour power in producing other people’s labour power. We are deprived of money of our own, wages which are ours by right, acknowledgement of and reward for a contribution to social labour.… The wage relation is not only a power relation between waged worker and employer but between those workers who do and those workers who do not have wages. (Selma James, Marx and Feminism [London: Crossroads, 1994], 12–13)

Although it was to mark only the first step in the development of contemporary social reproduction theory with all of its richness and complexity, it was this epistemological break associated with feminist historical materialism that set the stage for a more thoroughgoing critique of capitalist production and reproduction. Today, it is a widespread notion that household labor is the source of labor power as a special commodity and the main historical basis of women’s exploitation in contemporary society. Moreover, the transcendence of these conditions is recognized as crucial to any viable movement toward socialism.

Luciana Castellina, a longtime friend of Monthly Review and former editor-in-chief of Il Manifesto (Rome), turned 90 on August 9. Luciana has had a long and distinguished career on the left. She joined the Italian Communist Party in 1947. In 1974, she cofounded the Proletarian Unity Party for Communism, with which Il Manifesto came to be associated. She served four terms in the Chamber of Deputies and twenty years in the European Parliament. During the 1970 and ’80s, Luciana often visited the United States and frequently attended the brown bag lunches organized by MR editors Harry Magdoff and Paul Sweezy. In the context of the Sino-Soviet disputes over the future of socialism, Castellina indicated in a 1985 interview in New Left Review that her position was “akin to that of Monthly Review in the United States,” sympathetic to some aspects of Maoism particularly in relationship to “national liberation movements in the Third World,” but never “dogmatically Maoist,” as in the case of some other New Left currents after 1968 (“Il Manifesto and Italian Communism: An Interview with Luciana Castellina,” New Left Review 151 [May–June 1985]: 27).

We would like to send our best wishes and congratulations to Luciana, in what we regard as our long, shared journey toward socialism.

Monthly Review and Monthly Review Press author, world socialist activist, and theorist of revolution, Marta Harnecker, died on June 15, 2019, at age 82. Marta was an extraordinary person by any measure. She wrote over eighty books, a number of them published by Monthly Review Press—including Planning from Below: A Decentralized Participatory Planning Proposal (just published, with José Bartolomé), A World to Build: New Paths Toward Twenty-First Century Socialism (2015; winner of the 2013 Liberator’s Prize for Critical Thought), and Understanding the Venezuelan Revolution: Hugo Chávez Talks to Marta Harnecker (2005). Her Latin America and Twenty-First Century Socialism: Inventing to Avoid Mistakes was published as the special July–August 2010 issue of Monthly Review.

Born in Chile in 1937, Harnecker became an activist in the early 1960s and studied Marxism under the philosopher Louis Althusser in France. After returning to Chile, she published numerous pamphlets publicizing socialism, along with her influential Elementary Concepts of Historical Materialism, developed for Latin American students of Althusser. With the election of Salvador Allende, she threw herself into the struggle as editor of the weekly Chile Hoy. Following the coup, Harnecker took refuge in Cuba, where she married her first husband Manuel Piñeiro, known as Comandante “Red Beard,” a leading figure in the Cuban Revolution. Together they had a daughter, Camila Piñeiro Harnecker. Manuel Piñeiro died in a car accident in 1998.

While in Cuba, Marta set up the Popular Latin American Memory Centre of Investigations (MEPLA) to study and propagate the real-life experiences of working communities dedicated to socialist change. This led to her 1999 book, The Left on the Threshold of the 21st Century: Making the Impossible Possible. This book came out just at the birth of the “Pink Tide” in Latin America, signaled by the election of Chávez as Venezuelan President. After reading her book, Chávez granted her an extensive interview, which became Understanding the Venezuelan Revolution. He subsequently invited Marta and her second husband, MR and Monthly Review Press author, Michael Lebowitz, to come and work with him in Venezuela, where they served as advisers to Chávez in the New Ministry of Popular Participation. They organized two international solidarity gatherings in Caracas in 2004 and 2005, setting up the Miranda International Center (DMI) in 2006 to continue this work. Marta played a critical role in bringing her experience to the new communal councils initiated by Chávez as a basis for twenty-first-century socialism. Many of the lessons she learned with respect to revolutionary protagonism are codified in her final book, Planning from Below.

The Political Economy of Women’s Liberation
A New Revolutionary Subject