Dear Reader, we make this and other articles available for free online to serve those unable to afford or access the print edition of Monthly Review. If you read the magazine online and can afford a print subscription, we hope you will consider purchasing one. Please visit the MR store for subscription options. Thank you very much. —Eds.
Notes from the Editors
by The Editors
(Jan 01, 2020)
Topics: Democracy Imperialism Movements Places: Americas Bolivia United States 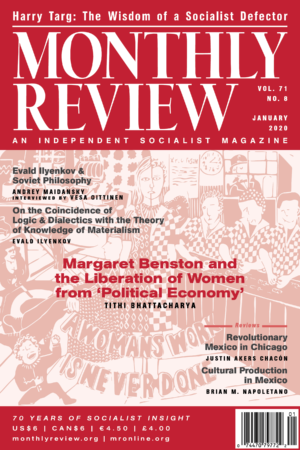 In December 1973, MR editor Paul M. Sweezy, who had made a number of trips to Chile and was a friend of Salvador Allende (a guest at Allende’s inauguration), wrote an article entitled “Chile: The Question of Power” in response to the military coup. As Sweezy stated, “the Chilean tragedy confirms what should have been, and to many was, obvious all along: that there is no such thing as a peaceful road to socialism.” He did not of course mean by this “that in the fight for socialism only violent means are appropriate and effective,” but rather that “at some stage of the process violent confrontation is inevitable”—since it is invariably initiated by the forces of reaction who see their power threatened. “It follows that the issue of violent confrontation must be central to all socialist strategy and tactics at all stages of the process” (Paul M. Sweezy, “Chile: The Question of Power,” Monthly Review 25, no. 7 [December 1973]: 1–11).

Hence, the strategy of the Popular Unity (UP) government in Chile in the early 1970s, Sweezy argued, should have been to address the military problem in the following way:

Reactionary officers should have been retired, loyal ones promoted to key command positions; the pay, living conditions and democratic rights of enlisted men and noncommissioned officers should have been expanded and improved; political education should have been introduced into training programs; and perhaps most important, all contacts between the Chilean military and the United States should have been unconditionally severed. At the same time, the UP administration should have started organizing, arming, and training a popular militia with the purpose of entrusting to it more and more of the responsibilities hitherto borne by the army and the national police (carabineros). All of these measures taken together, would lead more or less rapidly to the replacement of the old bourgeois military establishment by a new one under the control of the socialist forces. When this had been achieved, the process of transforming Chilean society from capitalism to socialism could begin in earnest.

Yet, rather than proceeding in this way, Sweezy indicated, the Allende administration did the opposite:

The generals and admirals were handled with kid gloves, and efforts were made to give them increased economic and political responsibilities. When the MIR (Movement of the Revolutionary Left) tried to do political work among the rank-and-file soldiers, the government cracked down hard: Allende’s own nephew was sent to jail for such activity. U.S. aid to the military was allowed to continue at a time when Washington was choking off all credits both by American banks and by international lending agencies to the government itself. In the final months before the coup of September 11, 1973, the Allende administration allowed the congress to pass without veto an act giving the armed forces the right to search anywhere for arms, resulting in a veritable reign of terror against workers in their factories and homes. The military policy of the UP, in short, was not only to tolerate but to flatter and strengthen an enemy and fifth column of imperialism in its midst.

Sweezy’s response to the coup against Allende comes to mind today in the context of the very different, but related, coup against the Bolivian government under President Evo Morales and the Movement Toward Socialism in November 2019. Morales and the entire line of succession to the Bolivian presidency were removed from power on November 10 by the military, after fascist mobs emanating from the lower-middle class and promoted by the political right were allowed to tear the country apart following Morales’s electoral victory. In this, a key figure was Luis Fernando Camacho, a fascist paramilitary leader and millionaire with U.S. backing. The homes of Morales, Morales’s sister, and various governmental ministers were burned down. Vinto Mayor Patricia Arce was seized by fascists, who chopped off her hair, painted her red, and dragged her through the streets for hours, forcing her to resign on her knees. What made these terrorist acts possible, as MR author Atilio Borón has explained, is that the “security forces” (military and police) chose to “withdraw from the scene and leave the field free for the uncontrolled performance of the fascist hordes—such as those that acted in Ukraine, in Libya, in Iraq, in Syria to overthrow, or try to do so in the latter case…and thus intimidate the population.… That is a new socio-political [configuration]: military coup ‘by omission,’ letting the reactionary gangs, recruited and financed by the right impose their law” (Atilio Borón, “The Coup in Bolivia: Five Lessons,” Orinoco Tribune, November 11, 2019; “Bolivian Mayor, Patricia Arce, Covered in Paint, Dragged through the Streets by Right-Wing Fascists, Orinoco Tribune, November 7, 2019).

The commander of Bolivia’s armed forces Williams Kaliman, who “suggested” that Morales step down, was trained in the School of the Americas in Fort Benning, Georgia, as were other coup plotters within the security forces (some having also been trained by the FBI). Kaliman has subsequently pledged his support to the self-appointed Bolivian “interim president” right-wing politician Jeanine Áñez. Shortly before the election, clandestine shipments of weapons and munitions hidden among goods in containers were delivered from locations in the United States to Bolivian right-wing forces. The security forces have deployed armored vehicles and helicopters to open fire on unarmed protesters. As of this writing (November 25, 2019), dozens of people have been killed and many more wounded. Morales was compelled to take refuge in Mexico (Jeb Sprague, “Top Bolivian Coup Plotters Trained by U.S. Military’s School of the Americas, Served as Attachés in FBI Police Programs,” Grayzone, November 13, 2019; “The US Embassy in La Paz Continues Carrying Out Covert Actions in Bolivia to Support the Coup d’État Against the Bolivian President Evo Morales,” Behind Back Doors, October 19, 2019; “Bolivia Clashes Leave Three Dead as Security Forces Break Fuel Blockade,” Guardian, November 19, 2019).

As explained by Borón, all of this came straight out of the latest political-military manuals of the U.S. imperial state. These “manuals published by various U.S. agencies and their spokesmen disguised as academics or journalists” provide instructions on how systematically to undermine the reputation of a popular, elected leader with accusations of dictatorship, corruption, and various other forms of character assassination in order to soften support on the left. Moreover, these manuals provide step-by-step instructions on how to prepare the political and military bases of a coup. Even a modicum of knowledge of these manuals and directives prepared by the U.S. empire and spread within the right should have confirmed that

security and public order should never have been entrusted in Bolivia to institutions such as the police and the army, colonized by imperialism and its lackeys.… When the offensive against Evo was launched, a policy of appeasement and not responding to the provocations of the fascists was chosen. This served to embolden them and to increase the bet: first, demand ballot; later, fraud and new elections; next, elections but without Evo (as in Brazil, without Lula); later, [demand] resignation of Evo; finally, given his reluctance to accept blackmail, sow terror with the complicity of police and military and force Evo to resign. From manual, all from manual. When will we learn these lessons?

Unfortunately, these and other lessons have not been fully absorbed by the left. On November 20, 2019, we published an article on MR Online entitled “A Letter to Intellectuals Who Deride Revolutions in the Name of Purity,” written by Roxanne Dunbar-Ortiz, Ana Maldonado, Pilar Troya Fernández, and Vijay Prashad. These authors question the growing tendency, even after the coup in Bolivia, for many on the intellectual left to deride the revolutions in Bolivia and Venezuela as representing capitalist, state-directed neodevelopment projects, and therefore responsible for their own supposed internal corruption and demise. In contrast, the authors of “A Letter to Intellectuals” emphasize the historic specificity of the Venezuelan and Bolivian revolutionary processes, which were unable to transcend completely the bourgeois state or to overthrow the capitalist class, yet which have nonetheless instituted genuine revolutionary processes based on the participatory power of workers, peasants, the poor, and the indigenous. The gains made by the genuine popular sectors in these revolutions have been enormous—the Bolivarian process in Venezuela having gone further, with its active development of a communal state, where a large majority of the leaders of the communes and communal councils are women. This, however, has not kept influential socialist intellectuals from sharply criticizing these states, on the grounds of their supposed lack of revolutionary purity or dictatorial character. This, in our view, misunderstands the character of real-world revolutionary processes, which always arise in a context of continuing class struggle and counterrevolution.

As stated in “A Letter to Intellectuals”:

Left intellectual currents have been badly bruised in the period after the fall of the USSR. Marxism and dialectical materialism lost considerable credibility not only in the West but in large parts of the world; post-colonialism and subaltern studies—variants of post-structuralism and post-modernism—flourished in intellectual and academic circles. One of the main themes of this seam of scholarship was to argue that the “State” was obsolete as a vehicle of social transformation, and that “Civil Society” was the salvation. A combination of post-Marxism and anarchist theory adopted this line of argument to deride any experiments for socialism through state power. The state was seen as merely an instrument of capitalism, rather than an instrument for the class struggle. But if the people withdraw from the contest over the state, then it will—without challenge—serve the oligarchy, and deepen inequalities and discrimination.

MR readers may be interested in a newly published article: Benjamin Feldman, “A Capital for the Age of Growth: Paul Baran, Paul Sweezy, and the Critique of Keynesian Civilization,” Critical Historical Studies 6, no. 2 (2019): 195–221. It draws heavily on the Baran and Sweezy Correspondence and we hope it will help inspire future investigations of their work of this kind. In this regard, we heartily recommend Paul A. Baran and Paul M. Sweezy, The Age of Monopoly Capital, edited by Nicholas Baran and John Bellamy Foster (New York: Monthly Review Press, 2017).