Dear Reader, we make this and other articles available for free online to serve those unable to afford or access the print edition of Monthly Review. If you read the magazine online and can afford a print subscription, we hope you will consider purchasing one. Please visit the MR store for subscription options. Thank you very much. —Eds.
Review
by Harry Targ
(Jan 01, 2020)
Topics: History Marxism Political Economy Socialism Places: Europe Germany 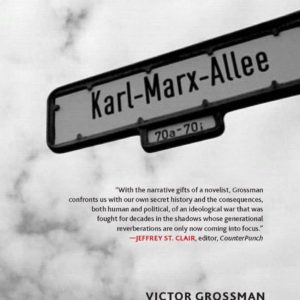 A Socialist Defector: From Harvard to Karl-Marx-Allee by Victor Grossman.

Harry Targ is a retired professor of political science at Purdue University. He has written books and articles on U.S. foreign policy and international political economy, and blogs at Diary of a Heartland Radical, www.heartlandradical.blogspot.com. He would like to thank Arthur Heitzer of the National Lawyers Guild for his help with this review.
Victor Grossman, A Socialist Defector: From Harvard to Karl-Marx-Allee (New York: Monthly Review Press, 2019), 352 pages, $23, paperback.

Victor Grossman’s A Socialist Defector: From Harvard to Karl-Marx-Allee is at once an exciting adventure story, an engaging autobiography of a radical opponent of U.S. imperialism, and a clear-headed assessment of the successes and failures of the German Democratic Republic (GDR, East Germany) at the onset of the Cold War until 1990, when its citizens voted to merge with the Federal Republic of Germany (FRG, West Germany). Most poignantly, Grossman compares the benefits workers gained in the GDR, the FRG, and even the United States during the Cold War.

The story opens with Grossman (formerly Stephen Wechsler) swimming the Danube River from the United States to the Soviet zone of Austria and, after a time, ending up in the sector known as East Germany. Grossman fled the U.S. military in 1952 when he discovered that he might be prosecuted for lying about not being a member of any listed subversive organizations, including the Communist Party of the United States. Punishment could have amounted to a large fine and years in prison. So, he fled, thus beginning a lifelong journey living in, studying, and writing about the GDR, a smaller and weaker sector of Germany that had been demonized by Western journalists, academics, and politicians.

The book in significant detail compares the background to the formation and political and economic circumstances of the two Germanies during the onset of the Cold War (1945–53). At the last wartime conference in Yalta in February 1945 and Potsdam in July 1945, the defeated Germany was divided into so-called temporary zones of occupation, with the United States, Great Britain, France (later), and the Soviet Union controlling sectors of the country. By 1946, the U.S., British, and French zones were combined and, in 1949, created the FRG while the Soviet Union-controlled sector, the poorest and least industrialized area, became the GDR.

Ninety percent of wartime reparations to the Soviet Union for Germany’s destruction during the war were extracted from the East German zone alone. West Germany paid no reparations and instead received a large share of the $14 billion Marshall Plan program. In East Germany, most former Nazis were eliminated from government, educational institutions, industry, and research. Its de-Nazification program meant that most trained scientists and engineers lost their jobs or fled to the West, leaving the GDR with the need to employ relative novices at the pinnacle of educational, scientific, and economic institutions.

In the West, however, most of the leadership in politics, education, and scientific research came from the former Nazi corporate sector, including German corporations such as I. G. Farben, Krupp, Daimler-Benz, Deutsche Bank, Thyssen, Bayer, and BASF. Central to Grossman’s vivid, concrete, and data-based comparisons of the two Germanies after the Second World War is the fact that the two sectors of Germany were not equally resourced powers but rather one sector that would become the FRG, which recently had the capacity to launch a world war, and a small, underdeveloped agrarian sector of the country. In other words, the Cold War in Central Europe was not a conflict among equals as the Western narrative proclaimed.

Most importantly for Grossman, the GDR, despite its relative poverty and underdevelopment, systematically adopted policies that privileged the German working class. Gaps in wealth and income among the workers of the East were eliminated, education and health care were provided free to all workers, family-leave policies and day care facilities were instituted, and all workers were provided at least one large meal a day at their workplaces. Everyone had a place to live and rent never exceeded 10 percent of workers’ wages. Women were accorded basic rights in the workplace and, at least at the local level and on the factory floor, participated in political and social life more or less as equals.

In short, in the context of underdevelopment, huge war reparations to the Soviet Union, and a largely agrarian society striving to jumpstart economic development, the government of the GDR provided basic but vital provisions for the entire population. In addition, the government and community provided cheap access to the best of German culture: symphonies, operas, ballet, and theater for everyone. And, of course, as the Grossman narrative makes clear, the GDR hosted a small defector population from many countries.

Although the GDR was struggling to build a workers’ state and, to some extent, develop economically, it did achieve part of its vision. The road to success, however, as Grossman suggests, was made increasingly difficult by international forces and domestic flaws. First, the United States and the FRG launched sustained propaganda campaigns so workers would reject East German society, offering the image of a Western capitalism that provided a whole array of goods and services unavailable to the East. Since the Berlin Wall was not constructed until 1961, East Germans visited West Berlin and, if they could afford it, purchased products unavailable at home. Since East Germans paid so little for food, rent, health services, and culture, they saved money. But the consumer goods they desired were not found at home. Thus, East Germans increasingly thought about consumption and decreasingly about the life-sustaining resources they took for granted.

The availability of consumer goods in West Berlin was glowingly described as part of the illustration of Western democracy beamed to the East by Radio Free Europe and other means of electronic propaganda. The new medium of television made it possible for East Germans to experience an image of wealth presumed to be characteristic of the West. Grossman points out that by the 1980s, many East Germans were led to believe that all Americans lived like characters in the television series Dallas, a dramatic show about wealthy Texans.

Enticing images from the West were combined with the political and ideological rigidities of the government and party in the East. Internally, leaders of the GDR and the Socialist Unity Party (a merger of the Communist and Socialist Parties) had engaged in the struggles against fascism since the rise of Adolf Hitler, extending solidarity with the struggle against fascism in Spain and later serving in the resistance or in exile during the Second World War. Grossman felt that this lifetime of struggle led leaders to be skeptical of change, suspicious of artistic experimentation (including the theatrical techniques of Bertolt Brecht, for example), and defensive in the face of criticisms of state and local policies. In the GDR, workers were empowered to challenge policies at the factory level but were discouraged from or punished for confronting leadership of the state and party.

In 1961, relative stagnation in economic growth in the East, increasing demand for consumer goods, encouragement by politicians in the FRG to abandon loyalties to the GDR, and growing hostility and threats of war with the United States led to increased emigration of East Germans to West Berlin. In August, the GDR and Soviet troops built the Berlin Wall, which reinforced divisions among the German people, further singled out the bisected Germany as a possible locale for escalation from cold to hot war, and became the reigning metaphor for a bipolar world divided between freedom and tyranny, capitalist development and socialist underdevelopment. While Grossman’s narrative is not uncritical of the GDR, he suggests that the metaphor, for the most part, was the opposite of the truth. For all its flaws, the GDR represented an attempt, in the face of war’s devastation, sustained pressures from the West, underdevelopment, and leadership inflexibility at home, to build a new kind of society that could meet the material, cultural, and psychological needs of the German working class.

Grossman, drawing from his thirty-eight years in the GDR, reflects on the achievements and shortcomings of the United States at home and in the world. As his criteria for comparison of the East and West, he uses Franklin D. Roosevelt’s 1941 call for the achievement of the “four freedoms”: freedom of speech and expression, freedom to worship as one chooses, freedom from want, and freedom from fear. “Looking back after more than seventy-five years, I think about the extent of their realization in the different societies in which I have lived” (261). Drawing on a wealth of data, he suggests that the amazing achievements in economic and technological developments the United States experienced in the post-Second World War period were tempered by the lack of achievement of social and economic justice. In addition, the United States engaged in worldwide exploits, such as its opposition to the GDR, that undermined the efforts of many countries to provide for their citizens on their own terms.

The text provides a rich, detailed analysis of limitations on the achievement of the four freedoms in the United States and argues for the construction of a society based on an egalitarian economy not driven by profit. He warns of the evermore virulent consolidation of capitalist instrumentalities, banks, and corporations on a global scale. While committed to the electoral process and convincing people to embrace change, Grossman concludes that he is “completely convinced [that] it is necessary to confiscate [the super wealthy’s] factories, banks, and mines, their huge expanses of farm acreage as well as their hoarded billions, in coins, paper, gold, or long columns of numbers. This wealth derives from sacrifices so many of the 99 percent have endured; it was created by the muscles, brains, skills, and dedication of countless millions of ordinary people” (320–21). He proclaims that his lifetime of experiences, including his nearly four decades in the GDR, convince him that we need to “dethrone the kings of wealth! Get rid of them!” (321).

A Socialist Defector is a masterful book that reads like a novel and memoir. It describes a politics of the Cold War in the heart of Europe that is not discussed in most histories of U.S. foreign policy. It details the positive features of East German society while criticizing its failings (for example, there is a long discussion of the negative impacts of the East German secret police, the Stasi). It also presents in depth the drive of the United States for global hegemony. In the last third of the book, Grossman also analyzes the failures of the United States (sometimes in comparison with the achievements of the GDR) with regard to social and economic justice, protecting the environment, and deterring military violence around the world. A Socialist Defector ends with praise for and a call for social movements in the United States to mobilize together to achieve the four freedoms (and along the way to fight the rising currents of twenty-first-century fascism).

Grossman ends his memoir reflecting on his life: “We are all part of the same world. I believe that what I wrote, said, or did was for a good cause, and despite occasional mistakes I have no real regrets. And I still have great hopes for a happier future for everyone, everywhere” (334).

View all posts by Harry Targ →