Dear Reader, we make this and other articles available for free online to serve those unable to afford or access the print edition of Monthly Review. If you read the magazine online and can afford a print subscription, we hope you will consider purchasing one. Please visit the MR store for subscription options. Thank you very much. —Eds.
Notes from the Editors
by The Editors
(Apr 01, 2020)
Topics: History Marxism Places: Global 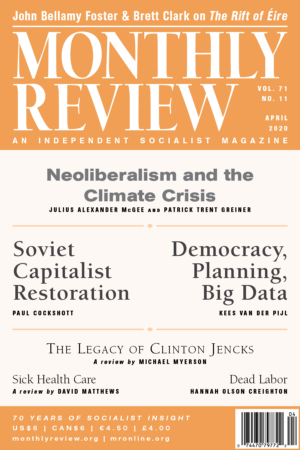 Fifty years ago, Monthly Review commemorated the hundredth anniversary of V. I. Lenin’s birth with a special April 1970 issue entitled “Lenin Today,” including contributions by Paul Sweezy and Harry Magdoff, James Boggs and Grace Lee Boggs, Eduardo Galeano, Eric Hobsbawm, Marcel Liebman, Ralph Miliband, Martin Nicolaus, Walter Rodney, and George Thomson. Two of the articles in the issue, by Hobsbawm and Nicolaus, dealt with Lenin’s well-known theory of the labor aristocracy, which he had used to explain the split in the world socialist movement at the time of the First World War. Both articles, however, began not with Lenin but with the earlier analysis of the labor aristocracy introduced by Frederick Engels, which had strongly influenced Lenin’s thinking. For Nicolaus, it was Engels, rather than Lenin, who had developed the most profound theoretical perspective in this regard. Today, at the bicentennial of Engels’s birth, it is worth taking a brief look at Engels’s treatment of the labor aristocracy, its connection to Lenin’s thinking, and the significance of these ideas in light of the current capitalist conjuncture.

The notion of a labor aristocracy was fairly prevalent in England by the late 1880s. However, widespread use of the term itself was almost certainly derived from Engels. In March 1885, he wrote an article entitled “England in 1845 and in 1885” for the second number of the Socialist League’s publication Commonweal, edited by William Morris. Here, Engels reflected back on the historical situation that existed in 1845, when his Condition of the Working Class in England was published, as contrasted with that of 1885. (This article was to form the core of his prefaces to the English-language editions of his book in 1886 and 1892, and to the second German edition of 1892.) The key questions for Engels in 1885 were: Why had an English working class, which had seemed in the early 1840s with the rise of Chartism to be ready to exert its full strength in a struggle for political power, succumbed so swiftly and completely to the power of capital? And why had socialism, despite the early influence of Owenism, not developed in England?

The main answer to both questions was clear. The triumph of the new regime of free trade with the abolition of the Corn Laws (under the shock of the Great Irish Famine) ushered in the period of “England’s industrial monopoly” in the world as a whole. The English working class “to a certain extent shared the benefits of the monopoly. These benefits were very unequally parceled out amongst them; the privileged minority pocketed most, but even the great mass had at least a temporary share now and then. And that is the reason why since the dying-out of Owenism there has been no Socialism in England” (Karl Marx and Frederick Engels, Collected Works, vol. 26, 295–301—all subsequent quotations are from this work).

More concretely, England’s manufacturing (and imperial) hegemony had led to “a permanent improvement…for two ‘protected’ sections only of the working class. Firstly, the factory hands.” Due to an Act of Parliament, which fixed their working day “within relatively rational limits,” factory workers found themselves in considerably better conditions—an issue addressed in Karl Marx’s Capital. Overlapping with this but going beyond it was a second, more privileged group: skilled workers belonging to

the great Trades’ Unions. They are the organizations of those trades in which the labor of grown-up men predominates, or is alone applicable. Here the competition neither of women and children nor of machinery has so far weakened their organised strength. The engineers, the carpenters and joiners, the bricklayers, are each of them a power, to the extent that, as in the case of the bricklayers and bricklayers’ labourers, they can even successfully resist the introduction of machinery. That their condition has remarkably improved since 1848 there can be no doubt and the best proof of this is in the fact that for more than fifteen years not only have their employers been with them, but they with their employers, upon exceedingly good terms. They form an aristocracy among the working class; they have succeeded in forcing for themselves a relatively comfortable position, and they accept it as final.… But as to the great mass of the working people, the state of misery and insecurity in which they live now is as low as ever, if not lower.

As Nicolaus pointed out in his article in April 1970, Engels’s insistence that the labor aristocracy mainly consisted of adult men, excluding women and minors as well as immigrant groups (principally the Irish, not mentioned by Engels in the quotation above but included elsewhere in the article and in his 1892 preface to the English edition of his book) was enormously significant. Engels suggests that a small fraction of the more privileged male workers, probably at most 20 percent of the work force, were included in the labor aristocracy. This left out vast sections of the working population, altogether excluding those who were not adult men; the informal sectors of industry (as in Marx’s treatment of modern domestic industry, where women were the major workers); the more precarious sections of the industrial reserve army; those marginalized because of religion or culture; the pauperized masses; the disabled; and so on. Engels pointed to the whole East End of London mired in precariousness and destitution. As he put it, “the East-end of London is an ever-spreading pool of stagnant misery and desolation, of starvation when out of work, and degradation, physical and moral, when in work. And so in all other large towns—abstraction made of the privileged minority of the workers; and so in the smaller towns and in the agricultural districts.”

Built into Engels’s position was the notion that England’s global economic monopoly/hegemony provided spoils both from its domination of world industry and its colonial supremacy. “Even the negroes of the Congo,” he explained, “are now being forced into the civilization attendant upon Manchester calicoes, Staffordshire pottery, and Birmingham hardware.” It was this that allowed certain large, monopolistic firms with surplus profits to provide surplus wages to a portion of the working class, which ended up being a privileged labor aristocracy and became attached to England’s rulers.

However, there were signs, Engels observed, that these conditions were rapidly changing. Overproduction and overaccumulation were characteristics of concentrated English industry, which was heightened by the rapid industrialization of other countries such as the United States and Germany, which were flooding the world with wares, with the result that “new markets are getting scarcer every day.” Consequently, “the manufacturing monopoly enjoyed by England for nearly a century is irretrievably broken up.” The ramifications for England and European capitalism generally were “a chronic state of stagnation in all dominant branches of industry. Neither will the full crash come; nor will the period of longed-for prosperity to which we used to be entitled before and after it. A dull depression, a chronic glut of all markets for all trades, that is what we have been living in for nearly ten years now.”

Due to the force of economic stagnation coupled with the breakdown of England’s hegemony in the world economy, socialism, Engels argued, would reemerge in Britain as a force in its politics, thrust forward by the growing class struggle of workers. “With the breakdown of that monopoly [world hegemony] the English working class will lose that privileged position; it will find itself generally—the privileged and leading minority not excepted—on a level with its fellow-workers abroad. And that is the reason why there will be Socialism again in England.”

Lenin’s first forays into the labor aristocracy theory, as Hobsbawm explained in his contribution to MR’s April 1970 issue, were very much in line with Engels. He saw the labor aristocracy phenomenon as confined at first simply to England, the internal conditions of which he knew very well, and rooted in England’s world economic hegemony. It was this that allowed Lenin, based on his critical examination of Sidney and Beatrice Webb’s Industrial Democracy and other works, to point to the merging of a privileged sector of the working class into the petty bourgeoisie. Later, he was to argue that the development of monopoly capitalism allowed for the spread of the labor aristocracy phenomenon, which had originally simply been a product of British hegemony, to other countries, with the result that the split in labor’s ranks weakened the world socialist movement that had grown up on the continent.

Today, these general class conditions, particularly those singled out by Engels in his theory of the labor aristocracy, resemble in certain ways those of the early twenty-first-century United States. U.S. hegemony over the world economy after the Second World War produced a relatively small privileged white, male stratum occupying an elevated occupational/class position within the working population, namely an aristocracy of labor. In the face of the relative decline of U.S. production in the global economy, associated with the offshoring of production by multinational corporations to subcontractors in the Global South (as well as growth of more traditional foreign direct investment) and the closely related rise of China, this privileged stratum of U.S. labor, which previously received some of the benefits of empire, is now visibly waning. At the same time, the great mass of the working class, faced with an economic landscape characterized by stagnation, financialization, and neoliberalism, has been subject to increased exploitation, expropriation, and an overall degradation of their conditions, leading to diminished expectations. It is due to the historical class context arising from these epochal shifts in material relations that we are now, at long last, witnessing the nascent reemergence of a movement toward socialism in the United States.

Intan Suwandi, a member of the MR editorial committee and author of Value Chains: The New Economic Imperialism (Monthly Review Press, 2019), has accepted a position as assistant professor in the Department of Sociology and Anthropology at Illinois State University, Normal, Illinois. Congratulations, Intan!

In the article “Marx and the Indigenous” by John Bellamy Foster, Brett Clark, and Hannah Holleman in the February 2020 issue of Monthly Review, “part IV” on page 2, bottom paragraph, and on page 15, second paragraph of the conclusion, should read “part VIII.” On page 16, paragraph 5, “behind him” should read “before him.”

The Rift of Éire
And then, I think about war