Dear Reader, we make this and other articles available for free online to serve those unable to afford or access the print edition of Monthly Review. If you read the magazine online and can afford a print subscription, we hope you will consider purchasing one. Please visit the MR store for subscription options. Thank you very much. —Eds.
Notes from the Editors
by The Editors
(Sep 01, 2020)
Topics: Climate Change Ecology Movements Places: Global 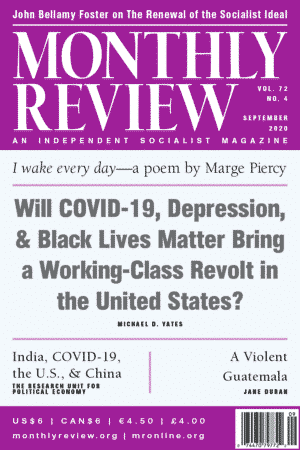 On January 21, 2020, Greta Thunberg, who today embodies the world’s climate conscience, gave a crystal-clear speech to the World Economic Forum in Davos. In it, she explained that in real-world terms—disregarding “negative emissions” technologies that do not exist at scale and may never be feasible—there was hardly any time left before the remaining global carbon budget (if a 1.5°C increase in global average temperature were to be averted) was exhausted. The 2018 Intergovernmental Panel on Climate Change’s special report on Global Warming of 1.5°C declared that only 420 gigatons (billions of metric tons) of carbon could still be emitted if the increase in average global temperature were to stay below 1.5°C with a 67 percent certainty, while the world has been adding 42 gigatons of carbon dioxide per year to the atmosphere. As Thunberg bluntly pointed out, “with today’s emission levels, that remaining [carbon] budget is gone within less than eight years.”

In another speech at the 2020 World Economic Forum, Thunberg declared,

One year ago I came to Davos and told you that our house is on fire. I said I wanted you to panic.… And for the record, when we children tell you to panic, we’re not telling you to go on like before. We’re not telling you to rely on technologies that don’t even exist today at scale and that science says perhaps never will. We are not telling you to keep talking about reaching “net zero emissions” or “carbon neutrality” by cheating and fiddling around with the numbers.… Let’s be clear. We don’t need a “low carbon-economy.” We don’t need to “lower emissions.” Our emissions have to stop.… And until we have the technologies that at scale can put our emissions to minus then we must forget about net zero—we need real zero.… If high emissions continue like now even for a few years, that remaining budget will soon be completely used up.

Thunberg did not expect the wealthy and powerful at Davos to act in response to her blunt statement of the facts. Rather, she was speaking truth to power while seeking to give new impetus to the world climate movement. At the time she spoke at Davos, the momentum of the climate movement was still building and more waves of school strikes were in the offing. The COVID-19 pandemic, however, intervened in the following months, creating a world epidemiological and economic crisis, throwing the climate change struggle into disarray.

Here it is important to understand that climate change is just one part of a larger planetary emergency related to the crossing of planetary boundaries due to the system of capital accumulation. New diseases that can be transferred from animals to humans (zoonoses) such as COVID-19 are another part. Knowledge of the overall planetary emergency in which the world is immersed, and its relation to capitalism, is thus crucial to our time. But as important as this knowledge is, it is also necessary to understand how people as individuals can organize to act collectively in decisive ways to combat this crisis, and how this is related to the complex dialectic of the individual and the collective, operating in the context of real lives and struggles.

Thunberg’s decision at age 15 to commence her school strike for the climate in front of the Swedish Parliament on August 20, 2018, was the product of intense struggles that she and her family had been undergoing for years, which involved not only the pressures of a celebrity family, but also mental health issues surrounding autism in the case of Greta and her sister Beata, and all in the context of the recognition of a planetary crisis. This can be seen in Our House Is on Fire: Scenes of a Family and Planet in Crisis by Greta Thunberg, Svante Thunberg, Malena Ernman, and Beata Ernman, published in Swedish in 2018 and translated into English this year. Here we find a collectively written story, narrated primarily by Malena Ernman, Greta and Beata’s mother, in 108 “scenes.” We are invited in an intimate way into the complex dialectic of the individual and the collective in their lives, explaining how Greta and her family came to occupy the stage in the climate struggle. “Everything felt like shit and we had to write about it—together” (74). The book ends with the words, directed to all of those concerned about the climate: “It’s time to take your place [as actors] on the stage” (278).

In the process, we learn much about what is required for a critical environmental perspective in the twenty-first century. We are told that the world is in a “sustainability crisis,” where “global heating” is “only a symptom,” marking a general “existential crisis” for all of humanity (42, 248). The signal problem is the existence simultaneously of “burned-out people on a burned-out planet” (75). Ultimately, it is necessary for individuals, confronting their own personal conditions, to also find a way to engage directly in the collective struggle for the earth. Because “there are no solutions within the current system” (215). “What’s needed is a revolution. The greatest in human history. And it has to come now” (152).

In his 2017 Trump in the White House, MR editor John Bellamy Foster argued that a nascent neofascist political-class formation had arisen in the United States, differentiated in important ways from classical fascism but part of the same overall genus. Like classical fascism, it has its basis in an alliance between monopoly capital and the lower-middle class, with the latter mobilized on the basis of a nationalist-racist-patriarchal ideology. Donald Trump’s rise to the presidency can be seen as a product of this rightward shift of the ruling capitalist class, and its increasing reliance on the lower-middle class as the rearguard in an increasingly fragile system, marked by deepening ecological and economic crises, acute class polarization, and declining U.S. hegemony.

Liberal theorists, in contrast, tend to ignore this wider historical-material context, describing fascism in a rigidly historicist and discursive fashion as if it is permanently stuck in the 1930s, while downplaying the actual class basis of regimes within the fascist genus and ignoring their relation to capitalism—elements that were central to all critiques of fascism in the 1930s and ’40s. To raise fascism today then is treated as a kind of political theater, worrisome, but of no real significance as far as the stability of the present system is concerned.

A good example of avoidance of the issues is a recent Business Insider (July 22, 2020) interview with the Yale philosopher John Stanley, author of How Fascism Works. Stanley, in a remarkable display of contorted logic, states: “I’m not saying that Trump is a fascist. Trump is certainly performing fascism—it’s performative fascism we’re seeing. It’s the tropes of fascism, and I think that’s worrisome enough.” Trump, Stanley tells us, is fascist “political theater.” One cannot help being reminded of the old adage: “If it looks like a duck, swims like a duck, and quacks like a duck, it’s a duck.” But Stanley is of course right in saying elsewhere in the interview that the point is not fascist personalities but fascist forces. What is needed is a thoroughgoing analysis of the class-political bases of contemporary neofascism, and of the alliance of forces that it has generated. This is not a purely academic question, but rather a pressing political issue of our times.

The Renewal of the Socialist Ideal
Negotiating Debt