Dear Reader, we make this and other articles available for free online to serve those unable to afford or access the print edition of Monthly Review. If you read the magazine online and can afford a print subscription, we hope you will consider purchasing one. Please visit the MR store for subscription options. Thank you very much. —Eds.
by Lau Kin Chi, Sit Tsui and Yan Xiaohui
(Oct 01, 2020)
Topics: Ecology Inequality Marxism Socialism Places: Asia China 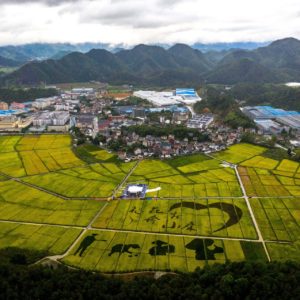 Zhoujiazhuang and the Puhan Rural Community offer contrasting experiences of how communities in different parts of China have responded to, negotiated, and undergone extensive changes during the last forty years since the reform policy was implemented in the country in 1979.

Though these two localities are characterized by their specific histories, they are more or less similarly constrained by the forces of China’s pursuit of modernization, aiming to build a “strong China” as a key player in international politics and the global economy. It seems to have become a common refrain that sacrifices must be made in order to be “successful,” sacrifices borne by the majority of people, excluded from decision-making mechanisms, mainly the urban poor and rural populations. There is no doubt that ordinary people suffer as ruling elites become more powerful and more prosperous. Despite this, the spirits of the expendable, the subjugated, and the marginalized are resilient and go against the current, tracing a trajectory of hope.

Zhoujiazhuang, fifty kilometers from the capital of Hebei province, is the last people’s commune at the township level in China today, retaining the commune’s collective management of land, economy, and social welfare, with agriculture still constituting a substantial part of its economy and income. When almost all people’s communes from the Cultural Revolution era were dismantled in 1982, voluntarily as well as by force, Zhoujiazhuang, with about four thousand families under the leadership of the peasant communist Lei Jinhe, refused to disband. This act of resistance marked the singularity of the Zhoujiazhuang process for collectivism and the weakening of the power of the state.

Zhoujiazhuang has charted its own path amid wild vacillations of the government’s policies on rural organization and agricultural production, from the 1950s to the present. Its insistence on the organizational mode of the commune, unlike the top-down imposed people’s communes of the Big Leap Forward or the Cultural Revolution periods, was paramount for its innovation of a production scheme that was neither egalitarian nor polarizing, but was adopted with the consensus of commune members. Zhoujiazhuang, with its common funds and resources, was able to prioritize meeting the needs of its members regarding employment, housing, education, health, and food security. It was not, of course, a paradise—it was not immune from the impacts of the political, social, and cultural trends of individualism and self-interest. However, through its established, collective institutions and customs of over sixty years, it could still defend a collectivist management of the community’s economic and social life.

The experience of Zhoujiazhuang shows that established structures as well as horizontalism can be combined positively to experiment with the idea of communism, characterized by elements of openness and the collective creation of the communal. The general tone of the history and culture of Chinese society is that of the overdetermining power of hierarchical order in which command and obedience rule daily lives. Zhoujiazhuang itself can be seen as a hierarchical unit embedded in a larger hierarchical context. In reacting against this larger context, the nature of the governing relations of Zhoujiazhuang transformed not by jettisoning hierarchy and thus uprooting itself, but rather by making use of the established forms to facilitate consensus and transform relations of command and obedience into relations of common struggle against top-down structures.

The experience of the Puhan Rural Community illustrates how some peasants in Shanxi province found themselves atomized and vulnerable after the distribution of land to individual households in the 1980s, and began to organize themselves to meet their needs, not only for cheaper agricultural inputs through collective purchase, but also for provisions of social services, which were in dire demand in rural areas. To maintain their agricultural production and meet daily expenses, peasants were more and more coerced to turn to credits. The Puhan Rural Community made several attempts to pursue financial credit with different partners, exploring modes by which peasants in need of loans could fight usury and take up microfinancing. Such arduous efforts showed the difficulties and constraints, as well as the resistance and achievements, of the community. Its attempts to favor the disadvantaged, to place an emphasis on ecological farming, to engage the youth, and to provide services to the elderly, the young, and the needy in the village were fraught with difficulties. In response to widespread usurious loans in the countryside and bad debts and defaults, the government went for policies to regulate and control without discrimination, which simultaneously impacted negative and positive practices. However, the Puhan experience shows the need and potential of the cross-village organization of peasants to counter the effects of atomization and financial exploitation.

In brief, the two experiences of Zhoujiazhuang and Puhan are audacious attempts of rural communities to organize and rely on themselves to sustain agriculture and regenerate community bonds in the face of a complex and conflicting web of government policies, market forces, and cultural disorientation. These are not so-called success stories, but they manifest the spirit of defiance and perseverance, manifested in on-the-ground initiatives by local communities. In the practices of these resilient spirits, we see constituent elements of a future actualization of forms of life centered on the production of the communal defined by principles of mutuality, interdependence, and self-activity.

Revisiting Collectivism and Rural Governance in China
Toward Delinking: An Alternative Chinese Path Amid the New Cold War