Dear Reader, we make this and other articles available for free online to serve those unable to afford or access the print edition of Monthly Review. If you read the magazine online and can afford a print subscription, we hope you will consider purchasing one. Please visit the MR store for subscription options. Thank you very much. —Eds.
Notes from the Editors
by The Editors
(Oct 01, 2020)
Topics: Education Globalization Imperialism Marxism Media Political Economy Places: Americas Asia China United States 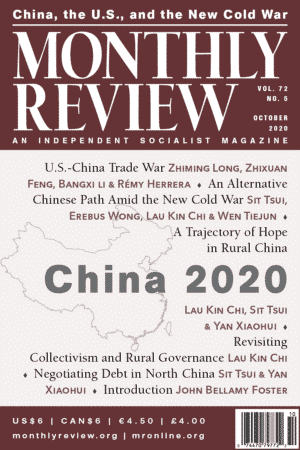 The current special issue of Monthly Review on China 2020 takes on a special significance due to the growing conflict between the United States and China, making critical Marxist analysis in this area all the more important. Here, it is significant that the historical bases of China’s development and the growing U.S.-China conflict can be found, as they developed over the last decade or so, in the articles listed above, which, together with the present special issue, provide a comprehensive view of the political economy of contemporary China and its wider global relations.

On July 12, 2020, John Bellamy Foster participated in the closing session of the Main Forum of the Seventh South-South Forum on Sustainability: Climate Change, Global Crisis, and Community Regeneration. The conference/webinar was organized by Lau Kin Chi and Sit Tsui through Lingnan University in Hong Kong. Foster and Wang Hui, professor of Chinese Language and Literature at Tsinghua University in Beijing and one of the leading critical Marxist thinkers in China (named as one of the top one hundred public intellectuals in the world by Foreign Policy in 2008), were the two principal presenters in the session, along with a number of discussants. The public session was preceded by an extensive prediscussion between Wang and Foster on July 3. (The Review of the Month for the September 2020 issue of Monthly Review, “The Renewal of the Socialist Ideal,” was based on Foster’s presentation to the closing Main Forum session.)

Recognition of the full scope of Wang Hui’s remarkable contributions to socialist thought is a concrete way in which to gain a sense of the startling development of critical Marxism in China since the 1990s. Wang received his PhD in 1988 and was present in Tiananmen Square in 1989—after which he was sent to Shanglou, Shaanxi, for reeducation (not reeducation through labor) for one year, during which he became more acutely aware of the conditions of the peasantry (Wang Hui, “After the Party: An Interview,” Open Democracy, January 13, 2014). He focused much of his original literary research on the Chinese revolutionary writer and poet Lu Xun (1881–1936) and the 1919 May Fourth Movement. During the 1990s, at a time when questions of class and capitalism were effectively excluded from intellectual discussion, along with social history, Wang focused on intellectual history, examining the role of modernity in Chinese history and its encounter with the West, eventually exploring intellectual development during the entire Qing Dynasty. His many works include his four-volume The Rise of Modern Chinese Thought (not yet translated into English). The range of analysis in his works is enormous, encompassing literature, philosophy, politics, history, and economics. Central to Wang’s analysis has been a conception of the revolutionary party in the Chinese context, in which he has drawn on Antonio Gramsci’s The Modern Prince and the analysis of people’s war as a political phenomenon. From 1995 to 2007, he was coeditor of Dushu, a prominent Chinese intellectual journal.

In the late 1990s, Wang Hui emerged as a strong critic of liberals (and neoliberals) and of the ideological role of neoclassical economics, which was establishing itself as the dominant intellectual tradition in China at the time. In 1995, in response to one of the first articles on globalization in China, which had viewed it favorably, Wang wrote a short critical response in Dushu, relying on the ideas of Samir Amin, whom he had heard speak in Denmark the year before. At around the same time, the journal Strategy and Management brought out a critical article on globalization. These interventions set off the debate on globalization in China, with the critical Marxist view attaining greater prominence after the Great Financial Crisis emerging in the United States in 2007–09, which quickly expanded to the entire globe (Wang Hui, “Fire at the Castle Gate,” New Left Review 6 [November–December 2000]: 86, 95). Wang was to become close friends with Amin, introducing his talk at Tsinghua University in Beijing on May 7, 2018 (Samir Amin, “Marx and Living Marxism Are More Relevant Than Ever Today,” Tsinghua University, Beijing, May 7, 2018).

Much of Wang Hui’s work in the last decade has been directed at a critique of neoclassical/neoliberal economic ideology, accompanied by an exploration of China’s revolutionary history and its implications for the present. He has written extensively on V. I. Lenin and Mao Zedong and the Russian and Chinese revolutions. A central concern is to ascertain the “weak links” in the present world order that point to the possibility of new revolutionary breakthroughs. His work has also focused on issues of substantive equality, democracy in social organization (as opposed to formal politics), and ecological sustainability. Many of the younger Chinese scholars appearing in this and other issues of Monthly Review have been deeply influenced by his ideas, which are emblematic of critical Marxism today. (See Wang Hui, China’s Twentieth Century [London: Verso, 2016], 37, 136–40, 227–61, 286–95; Wang Hui, “The Economy of Rising China,” Reading the China Dream [blog] [written in 2010]; Wang Hui, “Revolutionary Personality,” Reading the China Dream [blog] [originally published in Chinese on April 21, 2020].)

Another major development in critical Marxist thought in China and its connections with Western Marxism is the emergence of the World Association of Political Economy, chaired by MR author Cheng Enfu, editor-in-chief along with two others, including another MR author, Tony Andréani, of the important Chinese-based academic journal International Critical Thought. The editorial board of International Critical Thought includes MR authors Riccardo Bellofiore, Patrick Bond, Alexander V. Buzgalin, Al Campbell, David Kotz, and Leo Panitch. In this and other respects, we can point to growing intellectual interchange between Chinese Marxists and Marxists elsewhere in the world, a product of both the deepening crises and the newly emerging possibilities of our time.

China 2020: An Introduction
The Mexican and Latino Question