Dear Reader, we make this and other articles available for free online to serve those unable to afford or access the print edition of Monthly Review. If you read the magazine online and can afford a print subscription, we hope you will consider purchasing one. Please visit the MR store for subscription options. Thank you very much. —Eds.
Review
by Camila Valle
(Mar 01, 2021)
Topics: History Literature Marxism Media Philosophy Places: Europe Portugal 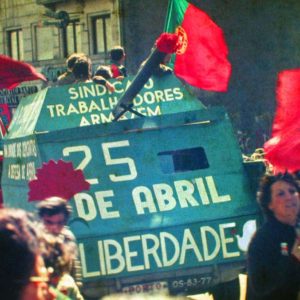 June 15, 2005, was declared a national day of mourning in Portugal. Álvaro Cunhal, leader of Portugal’s Communist Party for half a century and central figure of the 1974 Carnation Revolution, was gone. As the government stated in its decree:

Álvaro Cunhal was one of the great Portuguese political figures of the twentieth century. His renown before, during, and after April 25, 1974, remains inseparably tied to the recent history of Portugal, particularly his role in the resistance to the dictatorship and the sacrifices he stoically endured in clandestinity, prison, and exile.

Over the years, Álvaro Cunhal decisively marked Portuguese political life by the profound conviction with which he defended and fought for his ideals.1

A prolific political writer, Cunhal revealed in 1994 that he had also written several novels under the pseudonym Manuel Tiago. One of these novels, Five Days, Five Nights, was only translated into and published in English in 2020. Arrested in 1949, Cunhal wrote the novella while imprisoned, but did not take the draft with him when he escaped in 1960. Like many things we leave behind for a chance at freedom—only to unexpectedly rediscover them in the course of struggle—the manuscript was returned to him following the revolution and published under his pseudonym in 1975.

Despite the tropes the book reproduces, Cunhal, this particular period of Portuguese history, and the translation into English remain important. In part because Five Days, Five Nights is devoid of the stilted political speechifying sometimes found in political fiction, the novella manages to capture the complexities, loneliness, and bravery of ordinary people, and highlights how we find ways to look out for one another despite the barriers erected by society.

Cunhal does not give us a time period, context, or backstory. The book simply begins with the protagonist André—an almost-19-year-old from Lisbon from whose point of view the story is told—needing to urgently cross the border into Spain and a man named Lambaça hired to help him. A foil to urban, youthfully naive, and implicitly middle-class André (perhaps inspired by Cunhal himself, who spent the early years of António Salazar’s fascist Estado Novo in the Lisboan student movement), middle-aged Lambaça is “short and wizened, [with] a cheerless face of a strong brown color, accentuated by a thick growth of whiskers, a black brush mustache, and small, dark, attentive eyes.… He manifested…something arrogant, daring and insolent.”2 As the two, famished and exhausted, trek through thickets, valleys, and steep hills, their antagonism, often expressed as a battle of masculine bravado (André at one point even lies about having killed someone and carrying a gun), drives the plot as much as the migratory journey itself.

Along the way, André ponders the “doleful, peaceful townships” inhabited by “peasants of few words.” For him, the countryside and its people, particularly its women, become symbols of alienation and the frequent desolation of life: “the landscape…the same loneliness, the same sad, rounded hilltops and even, in the distance, that same big mountain, silent and commanding, spreading out and observing from afar.” Put another way, André is always asking himself, “What tragedy was hidden in that little peasant cottage a hundred meters away from a forgotten settlement in the mountains?”3

At the time Cunhal first wrote what would become Five Days, Five Nights, Portugal was immersed in a long and brutal dictatorship. It was the least developed country in Western Europe, with high levels of poverty and illiteracy, and deeply dependent on the country’s colonies of Angola, Mozambique, and Guinea-Bissau, as well as on Portuguese migrant workers sending money back home. Nevertheless, it is striking to read, even in fiction, such attributions to Portuguese rurality. Almost two decades after Cunhal’s first draft, Portugal, including its countryside, would become one of the freest places in the world.

In the 1974 revolution, mass strikes, unions, workers’ councils, neighborhood commissions, cooperatives, cultural centers, agricultural reform, and occupations of workplaces, houses, and land bloomed. There were popular clinics, people’s tribunals, self-run newspapers and radio stations, and Paulo Freire-inspired education campaigns. The independence movements in the colonies formally overthrew the yoke of colonial Portugal. A golf club in the south of the country declared it was open to all except its former members.4 Portuguese peasants did not need pity; they were, along with their urban counterparts, principal agents of the revolutionary process in the making.

In Five Days, Five Nights, we first encounter both women and quotidian life when the two travelers spend the night in the deserted countryside, in the small house of some people Lambaça knows. The scene is carefully composed: a sleeping old woman propped on the table, a young woman sewing wordlessly, an old man telling stories, a scarred man who leads them to mounds of straw on which to sleep, a barking dog called Douro.

A few chapters and tortuous paths later, André and Lambaça return to the small house. This time, only the young woman is inside, and she becomes the novella’s only fleshed out character besides the two men. She is, importantly, also the only other character with a name: Zulmira. Despite this, Zulmira is thereafter described only in terms of purity, beauty, and passivity, often depicted rocking her baby. Lambaça is presented as the vigorous violator of Zulmira and her goodness: “aggressively shoving a stool up against the table, [Lambaça] grabbed the girl with grotesque animal power and…kissed her neck hungrily. The girl neither reacted nor showed surprise. While he kissed her, she looked at André, quiet and submissive.”5 We soon understand that Zulmira is a sex worker, although poorly paid, if at all—“pay what you think is right,” she says feebly to Lambaça the next morning. Even when Zulmira is portrayed as having a sexuality, it is forced upon her, not really hers.

Here, André and Lambaça are again supposed to be foils, but while the contrasting descriptions may be intended to illustrate opposing treatments of Zulmira, as well as women more generally, they are two sides of the same coin. Lambaça is slimy and grotesque, blatantly disrespecting Zulmira, but André (and perhaps Cunhal himself) equally strips her of agency. For André, Zulmira is reduced to mere symbol, the supposedly pitiful lives of peasant women becoming the story’s paternalistic narrative impetus to fight for a better world. André “thought about his life and the reasons why he found himself in those mountains. He comforted himself. In the end, he was dedicating his life, joining his weakness to the millions of other weaknesses, trying to prevent the existence of girls in his country with that kind of fate.”6 What is missing, of course, is the notion that Zulmira can fight for herself. Neither Lambaça nor André seem to recognize that without Zulmira’s labor—her cooking, cleaning, bed making, body—they would not have had the food, shelter, and intimacy that gave dignity to their difficult and dangerous journey.

Land and women fit together neatly as metaphor, as objects to be rescued. But the history of the Carnation Revolution is a different one; it is also a history of gender and sexual liberation. Feminist groups, such as the Women’s Democratic Movement, Women’s Liberation Movement, and the Union of Antifascist Revolutionary Women, proliferated. Strikes and protests for equal pay and legal equality were massive and reaped significant victories, including the right to vote and the legalization of divorce. At movie theaters, long lines formed to watch films with erotic scenes, such as Last Tango in Paris, which thousands of Spaniards crossed the border to see on weekends since it was forbidden in Spain.7

Housewives came out in 1975 into the streets to protest against the high cost of living and demonstrated at the entrances to the supermarkets against the increase in food prices. Women agricultural workers, living in shacks, demanded decent living conditions. This participation went far beyond the gesture of poking carnations into the muzzles of the [Armed Forces Movement] men’s guns on the morning of 25 April.

As Manuela Tavares recalls, women’s participation in the workers struggles had fairly recent precedents in the form of the “down tools” strikes of 1969, in favour of better working conditions and also in the demonstrations against the colonial war.8

In the novella’s last chapter, André and Lambaça are eating together, the former trying to convince the latter to ration food for the rest of the journey. Amused, Lambaça reveals that they have already crossed the border: “So what did my friend expect? A wall at the frontier, huh? Or maybe a plaque?”9 Borders, it is clear, are not naturally occurring. Walls, checkpoints, and restrictions on movement are all human made.

As André indignantly attempts to settle accounts, Lambaça ignores him, despite having verbally bumped up the financial cost of the journey throughout the story. “Stay on this road,” he advises André. “Up ahead you’ll find the city. Right away, to the left, you’ll see the station. You don’t have to ask, you can’t miss it. Just buy a ticket to Madrid. Or wherever you want.” André persists, insistently asking how much he owes. Lambaça does not answer and heads up the road, walking away. For the first time in the book, we are presented with a “proper, paved road. There was something weird about finding such a road after several days of marching through desert mountains. That little highway announced the presence of both friend and foe, nourishment and danger, community and shock, all the excitement of life in human society.”10

Despite all the borders and divisions—of gender, nation, region, color, age, poverty—we keep us safe. As the revolutionary Portuguese poet José Carlos Ary dos Santos warned: “no one can close the doors that April opened!”11 A paved road remains ahead; Zulmiras to the front.

View all posts by Camila Valle →