Dear Reader, we make this and other articles available for free online to serve those unable to afford or access the print edition of Monthly Review. If you read the magazine online and can afford a print subscription, we hope you will consider purchasing one. Please visit the MR store for subscription options. Thank you very much. —Eds.
Notes from the Editors
by The Editors
(Feb 01, 2021)
Topics: History Imperialism Places: Asia Britain Europe Global India 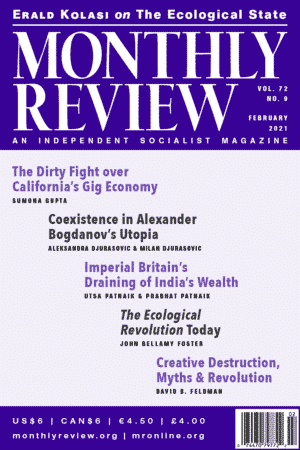 This month’s Review of the Month on “Colonialism Before the First World War” is from chapter 9 of political economists Utsa Patnaik and Prabhat Patnaik’s pathbreaking new Monthly Review Press book, Capital and Imperialism: Theory, History, and the Present, winner of the 2020 Paul A. Baran – Paul M. Sweezy Memorial Award. In their book, the Patnaiks develop an original theory of imperialism, arguing that expanded reproduction of the capitalist economies in what we today call the Global North, especially Great Britain, would not have taken place without the exploitation of the countries of the Global South.

Using India, Britain’s most important colony in the South, as their model, they show how England’s forcible extraction of surplus from the Indian economy is what made possible Britain’s growing accumulation of capital. It also allowed for the further expansion of the British Empire, providing: (1) what was, in effect, bribery in the form of higher wages for its labor aristocracy, which led to the latter’s support of the British Empire; (2) the financing of a great deal of Britain’s vast military expenditures in Asia; and (3) by means of the reexport of Indian goods, the increased inflow of funds from other colonized nations. In the chapter adapted here, the authors explain the infamous “drain” of Indian wealth to Britain, providing empirical evidence as to its enormous size. Britain’s gain was India’s loss, the latter measured in poverty, sickness, and death—including the great Bengal famine of 1943—affecting the workers and peasants who were the ultimate sources of the drained wealth.

For further information on Capital and Imperialism, see monthlyreview.org/product/capital_and_imperialism.

Our good friend and comrade, Leo Panitch, one of the great socialist intellectuals of all time, died on December 19, 2020, age 75. A professor of political science first at Carleton University in Ottawa and then later at York University in Toronto, Panitch had a strong friendship with MR editor Harry Magdoff, along with current editor John Bellamy Foster and former editor Ellen Meiksins Wood (who was a colleague of Panitch at York University). Panitch first met Magdoff in Toronto in 1977, at a conference on “The American Empire and Dependent States,” during which Magdoff complimented Panitch, then 32, on the substance of his talk, entitled “Imperialism, Dependency, and the American State.” Panitch published the first of many articles for Monthly Review, “The Importance of Workers’ Control for Revolutionary Change,” in March of the following year. In the 1980s, he would often visit Magdoff in New York, where Harry, his wife Beadie, and Leo would all share their love of Yiddish and Jewish food and talk socialist politics. Beadie’s family and Leo’s father came from the same tiny town in Ukraine, Nova Uschitsa (also Nova Ushyitsia) and the three of them had good times talking about cultural commonalities.

Foster met Panitch in the early 1980s and they became friends in 1984 while the former was finishing his graduate studies at York University. Panitch had just been hired at York University and agreed at the last moment, as a favor, to sit on Foster’s dissertation committee for the defense, when one of the previous committee members was unable to participate. By then, Panitch had become the leading theorist of the Canadian state. The effect of Panitch’s arrival in the Political Science Department at York University, then the highest rated department in the country, was wonderful to behold. What had been a loose and often conflicted group of left thinkers suddenly seemed to come alive and rise in overall stature under the force of Panitch’s charismatic, forceful, and open personality. Panitch was to serve as chair of the department from 1988 to 1994, during which it emerged as a world center of creative socialist analysis, an oasis for the intellectual left during a period of dramatic reversals worldwide. In 1985, he joined his mentor Ralph Miliband and John Saville as coeditor of the annual Socialist Register, first established in 1964 and published in the United States by Monthly Review Press, in cooperation with Merlin Press in London. Miliband was himself a close friend of and contributor to Monthly Review. Panitch’s arrival as coeditor further cemented the historic relationship between the two publications.

In the early 1990s, Panitch joined Magdoff, Sweezy, William K. Tabb, and others in New York in a small-group, think-tank-style meeting initiated by Monthly Review on developing a coherent socialist approach to the new ideology of capitalist globalization. This meeting was to germinate a concerted left response, in which Panitch, Magdoff, Wood (as coeditor of Monthly Review from 1997 to 2000), and Tabb all played leading roles in the 1990s, explaining the role of the capitalist state in globalization. Panitch was later to team up with labor economist Sam Gindin—they had been boyhood friends in Winnipeg—in exploring the role of the post-Second World War U.S. state in the formation of world empire. The result was their joint magnum opus, The Making of Global Capitalism: The Political Economy of American Empire (Verso, 2013), which won the prestigious Isaac and Tamara Deutscher Prize.

After Miliband’s death in 1994, Panitch continued to edit the Socialist Register, with various coeditors, organizing each issue around a specific theme, planned out long in advance. Altogether he edited thirty-three annual issues, each of which was a magisterial work, contributing to the development of socialist thought. In late November, he took part in launching the recently published 2021 issue, Beyond Digital Capitalism: New Ways of Life, coedited with Greg Albo, from his hospital bed, while undergoing treatment for multiple myeloma. Shortly after, he contracted COVID-19 in the hospital, ending his life.

Panitch strongly encouraged those on the left to come to terms with their own mortality in the context of their struggles for socialism, so as to allow them to think in terms of the longer view and to merge this into their daily practice. This was particularly important for socialists who had lived through the collapse of the post-revolutionary societies in the Soviet Union and Eastern Europe, seen the almost simultaneous collapse of social democracy in Western Europe, and witnessed the emergence of neoliberal globalization. In the face of these developments, Panitch, in his book Renewing Socialism (Westview, 2001)—the introduction of which was adapted for the February 2002 issue of Monthly Review—reminded his readers of the lengthy struggles ahead, by pointing to “the half century that separated the defeat of Chartism and the revolutions of 1848 from the rise of the new mass unionism and Socialist parties toward the end of the nineteenth century.” On this basis, he insisted:

We should at least try not to mix up our mortality with the issue of the realization of socialism.… Many of the people on the left who feel despondent today, and take seriously the talk about the death of socialism, are only acknowledging that their death is likely to come before socialism does. But socialism need not come in our lifetimes for us to be politically relevant as socialists. The point of socialist politics is about ordinary people developing themselves through the process of engaging in political life.…

It is the task of getting people to think ambitiously once again that is the immediate challenge before the left today. To transcend a debilitating political pessimism to make “the defeated man try the world again,” as Ernst Bloch put it in the darkest days of fascism’s advance—it will be necessary to rekindle socialist imagination through a revival of utopian thought. This means not abandoning Marxism, but rather reviving what Bloch called its visionary “warm stream” alongside the “cold stream” of political economy; and perhaps even adding a new layer to Marxist theory to appreciate that in addition to analyzing the accumulation of capital we need to figure how to foster the accumulation of capacities.

We can see through the cracks in the edifice earlier generations of socialists tried to build—“that’s how the light gets in.” We can make “a fresh start” with every new breath. Through socialist renewal it will be possible for “the spirit of revolution” to flourish anew. What will remain to be seen, of course, is whether we finally can “do it well.” (Leo Panitch, “Renewing Socialism,” Monthly Review 53, no. 9 [February 2002]: 45–46)

On page 13, paragraph 3, line 2 of John Bellamy Foster, R. Jamil Jonna, and Brett Clark, “The Contagion of Capital” in the January 2021 issue of Monthly Review, “Liu Jiwei” should be “Lou Jiwei.” In line 6 of the same paragraph, it should be “Lou.”

The Drain of Wealth
What We Recovered in the Revolution