Dear Reader, we make this and other articles available for free online to serve those unable to afford or access the print edition of Monthly Review. If you read the magazine online and can afford a print subscription, we hope you will consider purchasing one. Please visit the MR store for subscription options. Thank you very much. —Eds.
Poetry
by Marge Piercy
(Apr 01, 2021)
Topics: Fascism Ideology Marxism Movements Places: Americas United States 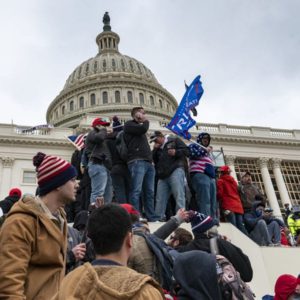 I watched the insurrectionists assault
the capital with Trump flags, anti-Semitic
signs, gas masks, guns and enough
angry hatred to kill those they see

as enemies. War in the streets the man
in charge summoned with furious lying
tweets, urged to action, applauded, hoped
they would overthrow the government

he had pledged to uphold — all to keep
his grasp on power. This is perhaps
only the beginning. Hitler too led
a failed coup before winning control.

It’s a cult of the strong man who postures
machismo, who stirs up hatred against
Blacks, Jews, queer and trans people,
immigrants, Muslims, uppity women.

Black Lives Matter protestors are gassed,
beaten, killed as were we anti-war
groups in my most activist days
when I could still lead and march.

These white power folks were gently
urged to disperse by police who had
watched with pleasure all day. I’m not
too old to witness democracy’s fall.

I wake to the possible
Building Communities of Solidarity